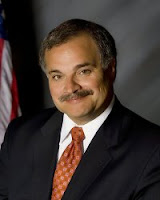 Max Armstrong was a business and ag-business reporter at WGN radio for more than 30 years. He now hosts the syndicated programs "Farm Progress America" and "Max Armstrong's Midwest Digest"


Rick: Last summer you quietly left WGN after 32 years with the station. That must have been a difficult day for you. What precipitated that move?

Max: I was very fortunate. I was just a kid when I started. I was only 24. I was so blessed to work with the industry giants there. I lived my dream. Growing up in a small town a few hundred miles away, and listening to big city radio, that’s what I always wanted to do. But there’s a time for everything, and I decided this was time to move on. About a year ago I got out of my pickup truck at 3:45 in the morning, and looked around at the big city around me from the parking lot by the NBC tower, and just thought, you know what, it’s time. I wanted more time to spend at my farm house in Indiana. More time to try other things. And getting on the road at three in the morning every day for all those years really takes a toll...

Rick: People don’t even realize how much that affects your health.

Max: You’re in a fog all the time. I was in such a fog I said to my wife “I’m staying up to see Carson tonight. Hey, who is this guy Leno and where did he come from?” (laughs)

Rick: I don’t know if you even realize this, but you were beloved by your co-workers there. I mentioned I was interviewing you to a few of them, and they all said: “Oh, Max is a great guy! Tell him we miss him tons!” Do you have any favorite memories from your WGN years?

Max: I grew up there really. It was a wonderful place to be. It was a great production factory for many years. They had both of the stations at Bradley Place back when I started, and there was a lot of cross over between TV and radio, and I got to do a little of both. I even did the Lotto drawing one night. I don’t know if you remember this, but Ray Rayner used to do the Lotto drawings—I think they were only once a week at the time. Well, one week on a Tuesday they realized that Ray was on vacation and they stopped me in the hallway, and said ‘Hey kid, we need someone to do the Lotto.” I had just been working on an engine and my hands were not exactly suitable for television, but I scrubbed ‘em, and did the drawing that night. It was fun doing stuff like that.

But the best part of working at WGN was working with legendary figures like Wally and Bob Collins and Roy Leonard—I was truly blessed. Roy Leonard, that man is such a class act, I will forever be thankful for the opportunity to work with him.

Rick: I know you’ve followed the many changes that have occurred since you left the station. What do you think of the new WGN this management team is trying to create?

Max: It’s a very different station but it’s a different era. Change is inevitable and I suppose change is what they’re getting right now. It might not be exactly what I would have done, but then again, I worked for eight different program directors and nobody ever in my 32 years there wanted to know what Max Armstrong thought we should do. I think that’s probably right, too. I don’t consider myself a programming whiz. I don’t study the numbers or know the science of the ratings systems. I hear the comments from people that don’t like it, but what do I know? It’s going to be wonderful to watch and see what happens. I would be remiss if I didn’t point out, by the way, that I’m actually a huge Garry Meier fan. That was a change that I really loved. There are also some things they left in place, that are outstanding, including Dr. Milt. There’s nothing like driving around at night and listening to Milt. 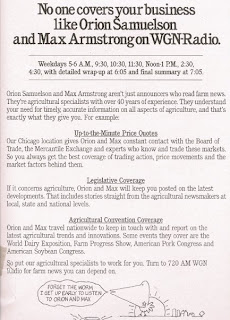 Rick: Over the years the farm reports on WGN have been criticized for being a relic of a bygone era. I assume you probably disagree with that. Do you think they remain relevant today to a big city like Chicago?

Max: Well, actually, no I don’t necessarily disagree with the decision to eliminate an hour of agricultural programming at noon. I can certainly see the point. You never heard Max Armstrong complaining about that. It’s a change that had to be made. Now, the noon show has become something very different. I still think a noon show can be very viable, but I’m not sure it should be about hot dog stands or Chicago architecture—as magnificent as that is--or only things that are going on in the city, but as I mentioned, I’m not a programming guy.

That’s what I hear from small market guys in the little towns all around the country. They ask: “Why does WGN waste 45,000 watts? They could do what they’re doing with 5000 watts.” I understand what those people are saying, but I also understand this is where the audience is. For everyone in a smaller town that doesn’t care about Chicago traffic, there’s someone in Chicago that doesn’t care about hearing the agricultural reports. Although, we really did work hard on making those as interesting as possible to the broader audience.


Rick: I learned about pork bellies from you.

Max: (laughs) There you go. At one time pork bellies were almost worthless, but farmers went to McDonald’s and Burger King, and convinced them to make bacon a part of the breakfast menu, and look at pork bellies now!

And don’t even get me started on organic food. We’ll never come close to feeding the world strictly with organic food. It’s just not possible. But, I digress...

Rick: I remember listening to you and John Records Landecker talk about your days growing up on a farm in Indiana. John’s grandfather was a farmer in the same general area you grew up. You come by your passion for farm issues naturally don’t you?

Max: Yeah, I loved picturing a suburban kid like Landecker baling hay in the summer with his grandfather, which is really what he did. I grew up in a town very much like his grandfather’s. The summer I got my drivers license, I got my FCC license too. You’ve been around long enough to remember the days you had to get your FCC license. Well, you couldn’t get one in a little town like mine, you had to go to a big city. My parents drove me to Detroit. And after I got my license, I got a job just across the river on a small radio station, and I worked on the weekends my senior year when my dad didn’t need me to work on the farm.

We had a farm with cattle and soybeans, and my family still owns it. I still get down there every six to eight weeks or so.

Max: Yes. I have a home studio I built about ten years ago. I did a lot of GN stuff from my home the last few years I was there, and this is where I record my shows today. Farm Progress America is a typical farm show. Max Armstrong’s Midwest digest is more of a Paul Harvey-esque approach—it’s a four minute show that touches on all sorts of issues, including farm stories. Not warehouse fires, or hard core crime stories, but stories that make you go hmmm. We’re on 105 stations right now. Not quite where I want it to be yet, but getting there.

Rick: And you’re also on TV, on “This Week in Agribusiness.”

Max: Yes, Orion and I own that show together and it runs on the RFD network based in Nashville, and we’re on about 25 local stations around America. The biggest part of the audience is on RFD. We run four times a weekend. One of those times is Sunday night at 8pm, and one night in early February, I was looking at our numbers and saw we had 50,000 households, and we were running opposite the Super Bowl that night. I wasn’t even watching us that night, but 50,000 households were. We have a loyal following out there in places like Wyoming and Kansas.

Rick: You and Orion used to a business show on WGN-TV too, didn’t you?

Max: Yes, Orion and I did a show called Top of the Morning, and it aired before Ray Rayner. Orion was actually the host, but he was on the road quite a bit, and I filled in for him when he wasn’t there. I got to see Chelveston the duck in the hallway every morning. (laughs)

Rick: One of the things that people may not realize about you is that you’ve been an appointed fire commissioner for the Lisle-Woodridge Protection District. You’re quite proud of that fire department aren’t you?

Max: Yes, I’ve done that for almost 20 years. Approximately 44, 000 fire departments in the United States are rated by ISO, the Insurance Service Office, for their fire supression capabilities, among other things. ISO reviews engine and ladder service companies and their equipment carried, responses to fires, station locations, the water supply and the number of available firefighters, as well as firefighter training.

Of the 44, 000 fire agencies reviewed, only about 65 nationwide carry the ISO 1 rating, and LWFD is one of them. You can probably tell that I have a great passion for this, and I’m proud to be even a small cog in such a great organization. You know (laughs), I’ve been doing it so long now that I think there can’t be more than 5 people in the 120 or so on staff that I haven’t helped hire. The other commissioners have been doing it a long time too. One has been around for 24 years, another one for 18 years.

Max: I think we did as good a job as possible. I really don’t believe it’s the job of the business reporter to be sounding the alarm. That’s the job of commentators and analysts. Granted the analysts have had their heads buried in the sand, or even worse, buried in their portfolios. I honestly think the SEC should be looking into that. I’ve never traded the futures market, because I knew that doing so would compromise my role. I wasn’t there to be a cheerleader to increase my personal profits. My role was to report what I saw was going on.

I will say, that as far this recession goes, it’s not that we didn’t have enough reporters looking into it. We have all these 24 hours news outlets now, and plenty of financial reporting. The problem is partially due to the 24-hour news cycle, which emphasizes the immediate over the long term. But then again, I guess I’ve just exposed myself as being from a different era.

Rick: I guess I’m from that era too, Max.

Max: Well it’s nice to have such distinguished company here.
Posted by Rick Kaempfer at 8:28 AM