(these three moves were four different shifts, in the space of 12 months, all different formats – don’t ever say Radio people don’t have a plan)

Rick: Since you left radio a few months ago, you've become a theatrical producer and writer. For people who haven't seen it, tell us about your play Leaving Iowa. 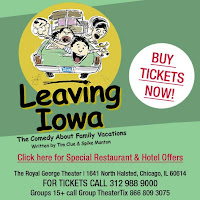 Spike: At it’s core, it is a comedy about family vacations. Although it is certainly more than a little tribute to that Greatest Generation Dad, that man who worked 50 weeks a year, got up early, got home late and then piled everyone in a station wagon for as much fun as he could pack in two weeks a year. Of course, fun was a relative term, but the memories are legendary. It really is a great show, and it closes at the Royal George on April 8.

Spike: I do miss the fun of creating on the air, but I don’t miss one bit the business of radio. It is the worst part of Corporate America with most of it’s least talented parts in charge.

Rick: In your many years in the business you've met just about every major Chicago personality, and scores and scores of nationally known celebrities. Which local celebrity, and which national celebrity made the best impression on you and why?

Spike: Kenny Mayne from ESPN was one of my favorites. He encouraged and enjoyed being called anytime, anywhere, live on the air. It was impossible to surprise him or find him unwilling to play along. If I called him in the middle of writing and organizing his Sportscenter show, he would take advice on what story to put where, etc. I once called when he was negotiating his way onto a last minute flight and we just listened in, offering completely unhelpful advice along the way. He’s just a great guy.

Locally, it’s hard to choose, but I’d have to group together a bunch of Chicago White Sox players from the 2000 team that shocked the league with a division title and playoff appearance. I was on the air with Harry Teinowitz at the time and Brook Fordyce, Kelly Wunsch, Keith Foulke and Paul Konerko were the primary influences that gathered 9 or 10 players together for a special event at a local comedy club in September of that season. Jose Valentin and Sean Lowe did standup comedy, Kelly Wunsch sang parody songs, they did comedy sketches and it was just a really fun, memorable night that I can’t ever see happening again. Those Sox fans that attended really had a once in a lifetime experience. 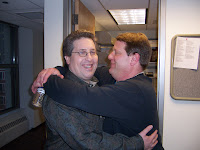 Rick: In your radio career you are probably most associated with ESPN's Harry Teinowitz (shown here with current co-host Dan McNeil) and WCKG's Steve Dahl. Tell us something we don't know about these guys who share everything with their listeners.


Rick: What is the worst advice any radio management type ever gave you?

Spike: “You have to trust me.” It’s simple and straightforward, but my favorite part about this lie was that it was told to me by EVERY MANAGER I HAD. I’ll tell just one story to illustrate. It was 1996, Harry and Spike were the Midday show on Sports Radio 1000. Management came to us and disclosed their secret plan. Keith Olbermann was coming to town on Friday. He was going to be the new afternoon show on the station. Sports Radio 1000 was going to get Dan Patrick for the mornings, Keith in the afternoon and us in between. They wanted us to show him the town over the weekend and get to know each other, talk about the glorious future. On Friday, they met with Keith and were to meet Monday to sign contracts. We hung out all weekend. Sunday he flew back to Bristol, Connecticut abruptly. On Monday, everybody at Sports Radio 1000 was fired following their shifts, one by one. Harry and Spike became the overnight show on the new simulcast WMVP/WLUP music talk station. TRUST ME.
Posted by Rick Kaempfer at 12:02 AM