Rich Koz currently hosts "Stooge-a-palooza" and "Svengoolie" on WCIU-TV, but he also worked in Chicago radio for many years.

Rick: I know some people are going to see who I'm interviewing here and wonder: "Isn't he a TV guy?" Not many people realize you have deep radio roots. Among other gigs, you were the sidekick/second banana/general all around goofball on Jerry G. Bishop's morning show at WMAQ in the early 70s. Talk about how that job evolved and the sorts of things you used to do on the air. 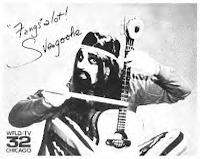 Rich: The job with Jerry actually came about when he was leaving WFLD after they cancelled his Svengoolie show (photo)- he was in talks with NBC for both radio and TV, and he thought enough of me to try and get me involved as part of his team for the radio side. He did some fill in at WMAQ, with me filling the afore-mentioned sidekick/producer/goofball role- and, when they brought him in full time- first, in afternoon drive, then in morning drive- I went along for the ride. 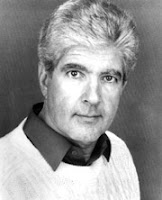 It was a great gig, other than having to get up so early for the morning show- we’d ride in, going over the papers, and he’d read something about Dean Martin, and say-“let’s do a bit on this- you be Dean!” I’d write stuff and be about 85% of the characters and “celebrities” that called in- I’d write song parodies for him, invent new bits, and we’d do sponsored commercials as bits- for example, I played the president of a lumber/home improvement chain, playing him as a sort of dopey guy, in a running series of live read commercials, and they went over really well.

Plus, on Monday mornings, when the show started an hour earlier than usual, for a while, Jerry (photo) had me do that first hour by myself! Jerry was the best--very generous, and, as I’ve always said, the guy who’s responsible for me getting into the broadcasting business…so blame him!

Rick: You were also one of the writers of a legendary radio serial called "Chicken Man," starring the legendary Dick Orkin. Some of the younger readers may not understand the impact that series had, but it was appointment radio--it still airs in some markets today. What was it like working on that show?

Rich: When Dick was doing a huge package of different features for the Bicentennial (yes, THAT long ago)- he brought me in to write one of the features- and, I did well enough that he had me write or co-write several others, as well as doing various voices on them. This evolved into me also writing and doing commercials, and other features- so, when he was going to do “Chickenman Returns for the Last Time Again”- the series where the Winged Warrior opened a crime fighting school, with one student- and he asked me to write some of the episodes, I was in heaven!

In junior high, I used to listen to the original series, and think “I’d like to do that some day.” I never realized that I actually would! Working with him was a real “learn as you earn” situation- I learned a lot by just hanging around him, as far as writing, voice work, double-tracking characters, etc.- being able to take his lead on coming up with adventures for Chicken Man was a real honor.

Near the end of the series, we needed some more plots, and I made a list of ideas for him- remember, the original series had gone on for quite a long time- and I remember him going through the list, and saying- “no, we did this- we did this – we did this one, too!” There were a lot of the episodes I had never heard, I guess. Funny that I managed to think of stuff he had already thought of!

Rick: Dick is probably the biggest star in radio advertising history. His commercials are still the best. You worked with him on those commercials for years. What is it about him and his approach that makes him so great?

Rich: Dick (photo) has such a great sense of humor, and can do that low-key yet hilarious stuff so perfectly. He always knew how to keep the funny stuff spread through the whole spot, and still get the sponsor’s message out. I love the fact that he could also come at the situation from a totally unexpected direction- and, he’d start some ads like you were eavesdropping on a conversation already in progress. Plus, he had a way of continuing on after the final punchline that was just frosting on the cake. He was a very kind gentleman, had no huge ego in spite of his great talent, and boy, did he know his stuff.

Rick: In the mid-80s after Son of Svengoolie was canceled you worked on WGN as a fill-in host for awhile and on the Satelite Music Network, and later became the morning man at WCKG. Looking back at that four or five year period when you were more a radio guy than a TV guy, did you enjoy the experience, or were you longing to return to television?

Rich: I really loved doing radio- being able to come up with stuff that’s based on things going on right then, being able to use all the “theatre of the mind” stuff, and having the almost instant feedback that you don’t get on TV- plus, not having to wear as much (uh- I mean- any) make-up! I had a great time, playing off listeners’ calls, being able to ad lib (that’s what we used to call improv, kids) I never felt that doing radio was just a placeholder until I could get a TV gig- I was very happy doing it.

There were times and stations where I wasn’t sure how I was supposed to fit in, what exactly they WANTED me to be, and I think I sometimes made mistakes by trying to be what I thought they wanted. The WCKG gig was a great time- I got to do shtick and basically be myself and do whatever I thought of, while playing “classic rock, baby!”

Rick: You're probably best known for your character Svengoolie, which originally aired on Channel 32 as "Son of Svengoolie" and now airs as just plain old Svengoolie on WCIU. Can you talk about the evolution of that character, and how you grew from young ghoul to man ghoul?

Rich: Originally, in the mid seventies, someone at a local TV station had approached Jerry G. about maybe doing a summer gig reviving his Svengoolie character. At that time, Jerry felt he didn’t really want to do so, part of the reason being that he was thinking that- someday- he might actually want to run for a political office- and didn’t want his opponent holding up pictures of him as Sven saying “THIS is my worthy opponent?!” But- he already felt confident enough in me that he suggested that I could be the Sven character- as “Son of Svengoolie”- and he would produce and write it with me. 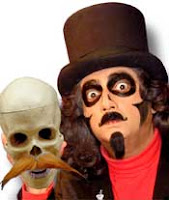 We had some false starts on it, and it didn’t really go anywhere- until Jerry was about to leave for the west coast, and asked what I planned on doing. I said I might try to pitch a TV show to local stations- and he said that, if I wanted to try and do the Son of Sven bit, he’d give me permission. It’s a long story, but, it finally ended up at WFLD- with me doing the Son of Svengoolie- in my original audition, I looked exactly like Jerry’s character, but, since they felt that looked too dated, I devised the look that finally premiered.

My character was pretty much based on how Jerry played the character, layered on my own personality, with the accent being, as Jerry puts it “Bela Lugosi crossed with Lawrence Welk!” I did the character there for 6 and a half years- and, even after that, was requested to do the character for appearances, radio and TV guest gigs- right up until I came to WCIU. 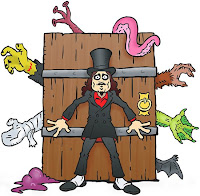 When I was taking the job here, Jerry was in town, and we talked about it- I mentioned that, even by the end of my WFLD run, there were people who said “SON OF Svengoolie? Who’s Svengoolie?”-and that I thought I might shorten the name or something. Jerry said –“I tell you what- you’re all grown up now- just be Svengoolie!” It was nice of him to hand over usage of the name to me.

Rick: My sons and I never miss "Stooge-A-Palooza" which is another show you host on WCIU. There's something about boys and the Stooges. I've seen you read the e-mails and letters from women, but let's be honest here. It's a guy thing, isn't it?

Rich: You know- it really isn’t! I first learned that when we started the Stooges show, and did a “man (and woman) on the street” segment- and I was amazed to find, in asking about that very question- that, by our experience- a whopping 80-85% of the women we talked to were indeed Stooges fans! Now, in the course of the show, I constantly hear from women who love those guys.

One lady, a former Honey Bear, wrote that she is a big fan in spite of the fact that she is a “girly girl!” I seem to think that, for a long time, it wasn’t considered “lady-like” to enjoy the Stooges, but now, with women liberated, they can “nyuk-nyuk-nyuk” openly without fear of reprisal.


Rick: I know you've won many awards for your television work, which really is great stuff. I wonder though, now when you look back at your long and varied career, what is it that you are most proud of--first in radio, and then in television?

Rich: As far as radio, I think I’m most proud of the fact that I’ve been lucky enough to work with so many of the people that I grew up idolizing- and had them treat me as an equal-and proved to myself that I could do it. With TV, I’m proud to have had a career that has been acknowledged by my peers as having “made significant contributions to Chicago television”- as the TV Academy’s Silver Circle put it- and- just the fact that the stuff I’ve done really means something to the people who have watched it. When I hear that phrase “I used to watch you as a kid- and now I watch you WITH my kids”- I think that says it all.

Rick: Is there any way you could ever be coaxed into coming back to radio?

Rich: I’m having a great time at WCIU and all our other stations, and love being there- but- I’ve always thought- and hoped- that I’d get to do more radio, somewhere down the line. It’d be a little tough to fit it into my schedule now, but- maybe someday…
Posted by Rick Kaempfer at 9:02 AM