I interviewed Andrea two years ago when she was doing news on the WGN Morning show with Spike O'Dell. She's still doing the morning news on WGN, but has since worked with two other morning hosts; John Williams and Greg Jarrett. I caught up with her again this week and asked her what that experience has been like...

Andrea: It's true! I have had the good fortune of working with 3 different "major market" personalities in the past year. I think each of our hosts brings with him/brought with him to the table something unique, and hopefully enjoyable for our listeners.

Spike was "the guy next door," someone everyone could relate to! He was-- and is-- one of the nicest, most down to earth, humble people you would ever want to meet. Spike had a unique way of blending current events with fun and humor into his show, and it showed... he was "KING" of morning radio during his reign! We keep in touch several times a week via email, facebook, etc, and he STILL makes me smile every time we talk!

John Williams brought a whole different persona to the morning show. As a morning show host, John was much more serious and much more into current events and the news of the day. But, John also has a very DRY sense of humor and -- like Spike-- John doesn't mind "throwing himself under the bus" every now and again to get a few laughs!

Greg Jarrett is kind of a combination of John and Spike. Greg is a total "News Guy"...he's been around the world literally "in the trenches" covering all kinds of interesting stories and is able to bring those stories to the show and incorporate them into his interviews. But, he's not "all news".... he has a great sense of humor, too!

I think the biggest similarity they all share is that they, like all of us, are very proud to be affiliated with WGN because the radio station has always been such a staple in the Chicago area!

My first radio gig was for WPGU-FM ('91-93), back when it was a classic rock station in the basement of Westin Hall in Champaign-Urbana. (Slogan: "Rock and roll till the cows come home") I was assigned the 2a-6a overnight shift on Sunday. It worked out perfectly...I would end my shift, eat breakfast at the Illini Orange, then walk over to my 8am chemistry class at Noyes. Not sure which was more brilliant...walking to Westin from my dorm in Urbana at 1 in the morning or taking Chem 101 my Freshman Year. Then, my Jr. Year I moved from music to news and accepted a news internship at WLRW-FM ('93), working for then-News Director Steve Grzanich (now of WBBM-AM fame). My senior year I went to all news station, WDWS-AM, the Voice of the Fighting Illini ('93'-94) and worked under the brilliant direction of then News Director Robin Neal (Kaler).

When I graduated, I didn't have a job, even though I spent months (and my last dime) sending resumes all over kingdom come, so I did what any out-of-work-college-graduate would do...I went to Greece. When I came back, I was very lucky to have received a call from an all-news station in Joliet, WJOL-AM (along with sister stations WLLI-FM and WJTW-FM). I interviewed and was hired as a General Assignment Reporter in May of 1994. After a year, I was promoted to Morning Anchor. Then, in 1996, I was promoted to News Director. I had a four-person staff, which nowadays is unheard of, for a station in a small/medium size market! In 1997, I worked as a freelance News Anchor for WMAQ-AM, then as a freelance anchor for WGN-AM. Finally, in 1998, WGN hired me FULL TIME! My first shift at WGN was Reporter and Evening News Anchor. In 2006, I was promoted to Morning Anchor for the Spike O'Dell radio show...and here I am today...


Rick: You and I have something in common. We both got our radio start during our days at the University of Illinois via WPGU Radio. Can you explain what it is about that radio station that has given all of us who worked there such an advantage after we left college?

Andrea: The best thing about WPGU was that it was so hands on! You didn't spend months watching how to hone your craft ...you actually got to spin the dials, program the station, field listener calls, and attend remotes. The initial training at WDBS was intense...baptism by fire...either you had it or you didn't. It was run by students who had the drive and the desire to succeed. I worked with brilliant, young broadcasters who worked countless hours at the station making sure 'PGU was as competitive a station as the other stations in the market.

Rick: You are a rare breed in this business now--an actual radio journalist. In addition to anchoring the news on the Spike O'Dell show, you also go out and cover stories. Why do you think that has become such a rarity in radio these days?

Andrea: I hate to say this, but so many Anchors (in both radio and television) come into work, read their scripts that are prepared for them, then go home. What kind of a challenge is that? We are very fortunate here at WGN to be able to cover our own stories, write our own news stories-- and our own scripts for that matter! I don't want to blame laziness on the fact that so many Anchors are not Reporters as well, but perhaps it is just a role or a pattern that is allowed by station management. Our managers continually challenge us and keep us on our toes...and frankly, I wouldn't want it any other way. (Photo: WGN newsies Wes Bleed, Judy Pielach, Lyle Dean, Steve Bertrand, and Andrea) Being out there as a Reporter helps you maintain a closeness with the community as well as solidify communication with your contacts, which really are the bread and butter of a news organization, as are our listeners of course.

Rick: What are some of the most memorable stories you've covered and why?

Andrea: The most memorable story I ever covered was an execution at Stateville Prison in 1996. It's the "resume grabber" everyone asks me about. All I can say is, I'm glad I covered it as a Reporter, but it's something I don't know if I would cover a second time. It was though a human and humbling experience. I also enjoyed covering the George Ryan trial, in addition to recent series' I've reported including ex-convicts vying for a second chance and how the state of IL is lacking when it comes to background checks affecting people associated with our children.

Rick: When you were named the full-time morning news anchor at WGN, you beat out some of the best radio journalists in the country who were also vying for that slot. What has it been like following in the footsteps of Tom Petersen, and how have you been received by WGN staffers and listeners? 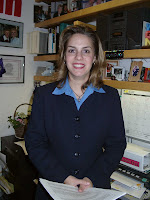 Andrea: Tom Petersen hired me...he was a mentor to me and is still a very good friend. I knew when I was being considered for the position, I would have big shoes to fill. As for our listeners, all I can say is that they are the best. I received so many wonderful emails when I took over as Morning Anchor. I actually tried to save them in an online folder, but there were so many, it nearly crashed the system!! I can honestly say I have not received one disgruntled comment...from anyone. I hope my partnership with the station will continue for many years to come.


Rick: Your on-air partner Spike O'Dell has been doing the #1 show in Chicago now for something like seven years. Why do you think he doesn't get the credit he deserves?

Andrea: Spike (photo) is one of the nicest people you'd ever want to meet. What you hear it what you get. He doesn't have an attitude or an ego, which is pretty rare, considering he really is the "KING" of morning radio in Chicago. I think the fact that he IS so down-to-earth opens him up to critics, who usually feed on the "bad boy image". But, I think ratings speak louder than anything else-- he is consistently the number one rated program in the #3 market in the country. Not too shabby....

Rick: I've met Spike a few times, and every time I talk to him, I think--is it possible that such a big star is really that nice? Tell us about the dark side of Spike O'Dell :).

Andrea: Honestly, there really is no dark side...unless you want to tease him about his love for gadgets or space, which we do every now an again.

Rick: You've also done (and continue to do) some television work. Can you compare and contrast the experience of doing television and radio?

Andrea: Well, to start with, TV news is a lot more demanding for a Reporter. You have to drive to a story, have the photog shoot the video, put a package together and really let the pictures tell the story. Radio is much more immediate...you can still "chase" the story, but the beauty of radio is that you can get the story on the air right away, instead of having to wait through the prime time television shows. Plus, you get to use your creative side since YOU are the one telling the story...not letting pictures or video images speak for you.

I also serve as a correspondent for the TV show "House Smarts" with Lou Manfredini on NBC-5, Chicago (Saturdays at 5am and 6:30pm). Working on this show is an absolute blast! Lou and the HS crew came up with a revolutionary idea for a show like this-- it is unlike any other "home improvement" show you see on TV. House Smarts was shooting "Green Pieces" before it was "chic to be green". We start shooting our third season in August!