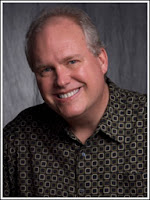 Big John Howell is the morning co-host of "John & Cisco" on WIND AM 560. He previously worked for 17 years as the morning and afternoon personality at US-99

Rick: After all those years doing country radio, you’re now doing a talk show. What have been the biggest surprises and challenges? 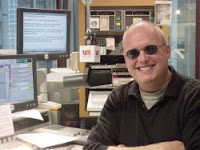 John: It’s a challenge every day, which I love first and foremost. There’s a definite learning curve to it. After years of “turning it out,” making the audience the star, it took me a while to allow myself to be the center of attention, to state my honest opinion without couching it. I have to take a stand. You know, when I was at US 99, I always considered myself the right wing nut in the crowd—but now that I’m at WIND, it turns out that I’m more of a radical moderate. In fact, I'm probably the most liberal guy on the radio station.

Rick: Tell us about the morning the lights went out in Arlington Heights (the day a big storm knocked out the power at WIND).

John: This actually happened to me once before when I was in Grand Rapids working with Jennifer Stephens. Her sheepdog inadvertently knocked everything off the air but the microphones, and we did the rest of the show in the dark. But the day you’re talking about was a heck of a challenge. It really took us out of our normal element. We had just enough juice for the microphone—and the commercials were played from a PC with a battery. We didn’t even have a phone amplifier working--meaning that the listeners couldn’t hear us when they were on the air. The phone screener had to say….”When you hear the static, just start talking until your story is over.” But it was great because we were experiencing the same thing our listeners were experiencing, and we were right in the middle of the story. We did an extra hour that morning because we couldn’t get the network from the satellite. They finally got the satellite powered back up at 10am. But I was really proud of that little radio station out there, the little engine that could. Everyone pitched in, and we got up and on the air before any of the big guys could have done it.

Rick: Anyone that listens to your show knows that you’re a conservative, but not everyone realizes that you once co-hosted a morning show with Air America liberal Stephanie Miller. What was that experience like? Do you still keep in touch with her at all?

John: That was a heck of a staff on that show. It only lasted 18 months, from early 1988-to October of 1989, but there was a lot of talent assembled in that room. We had Steve Scott as our newsman, Jim Volkman did sports, Mick Kaylor was our producer. Plus, our PD was Tim Sabean, and Bill Towery was our production guy. It was a great staff and a great radio station. You’re right that my listeners probably don’t know that I worked with Stephanie (photo). The unfortunate thing is that we didn’t have much chemistry. She was from Rochester, and I was from Michigan, and we didn’t really click. But I commend her for making it—she had talent then, and she has talent now. I’ll still click her on to hear how she’s doing. She really was enjoyable to work with, and I'm happy for her success.

Rick: You were at US-99 for so many years it must have gotten into your blood a little bit. What are some of the things you’ve had a hard time shaking from your US-99 experience?

John: At US-99 we were conditioned to make the music and the listener the star. As I mentioned already, it was a big challenge for me to get past that. What do I miss? I miss the music, I miss the listeners, and I miss the fun. I had so much fun in that format—I could have stayed there forever. But I really wanted to try something else. I wanted to see if I could do it. I wanted to exercise muscles that I hadn’t used since Grand Rapids.

Rick: In addition to being a radio personality, you’re a musician. Your band has been a staple of the summer fair concert circuit for years. Are you still doing shows and what is it about being in a band that you love so much? 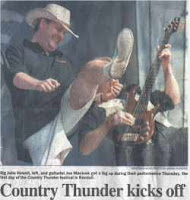 John: We did about 8 shows last year. In our heyday we did about 60 shows a year; every Thursday, Friday, double Saturday, and double Sunday during the summer. It was nice having a safety deposit box full of cash, not that I didn’t declare every cent, Mr. IRS man. I really did love it though. It was my night out bowling with the guys without having to bowl. It was a chance to play with my childhood buddies, be a big man on campus for 90 minutes, and pretend like I was a rock star. Reality was always waiting for me on Monday.

Rick: Your current co-host is former WLS newsman Cisco Cotto. How is working with him different than your previous co-hosts? 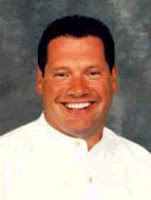 John: Both Ray (Stevens, pictured left) & Cisco (Cotto, pictured right) are talented and really fun to work with. I’m privileged to have worked with Ray at US-99, and I wouldn't be surprised at all if I wound up working with him again someday. As for Cisco, I’ve learned a great deal from him. I find him a true compass for the news talk format. He really has a great feel for it after all those years at WLS. I would have hated going into this job without him.

Rick: On Chicago’s radio dial you can find virtually every major talk radio voice in America. Who do you listen to?

John: After I started working here at WIND, I stumbled across Michael Savage (photo), and I found him to be a maniac, but very compelling. He hasn't been as influential to me as say Larry Lujack or Steve Dahl or John Landecker or Milt Rosenberg, or Dick Buckley were, but I like to punch him in to see what he’s frothing at the mouth about. I don’t agree with him on everything, but it’s like sitting at that first turn of a NASCAR race, waiting for the crash. I also listen to Roe, Steve Dahl, Garry Meier, Mike North, Boers and Bernstein, Waddle and Silvie, and I love Pat Hughes and Ron Santo. I really tune in all over the dial. The only show I don’t get is Kathy & Judy, and that’s because I don’t have a menstrual cycle...although I have experienced some spotting lately...but that’s probably caused by the Jack Daniels.

Rick: You are one of the many Chicago radio personalities who hail from Michigan. Names like Landecker, Matthews, Stroud, Haze, and many more. What’s in the water up there?

John: You’re right. Half of the newspeople and traffic people in Chicago are from Michigan originally too. I think it’s because we grew up close to Chicago, and lots of us listened to Chicago radio. I remember the first time I heard Steve and Garry on WLS, with that big reverb, and said “now that’s a radio show.” I tried to do that show in Grand Rapids, and my program director pointed out to me that I was doing it without having the fun they had. It was probably the best advice I ever got. Steve and Garry laughed all the time, and really let it fly.

Rick: And turning off that filter, as it turns out, was the same problem you had when you started at WIND.

John: True. It goes against everything you've been taught, and that's why it's so hard to do. But if you don’t do it, you will come off as wishy washy. I no longer try to couch what I say. Consequently, I’ve been called more bad things in one year at WIND than I was in 17 years at US-99.

John: It's OK. It's part of the job. I think the nuts on both sides of the political aisle need to be called out occasionally. Here’s my take on the two parties. Democrats want to be Santa, and Republicans want to be God, and neither can be either.
Posted by Rick Kaempfer at 12:03 AM