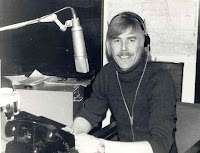 Doug Dahlgren was a prominent voice in Chicago radio during the 1970s, most famously during his time at WCFL.


Rick: You've worked all over the country, including obviously Chicago, but you hadn't worked here in a long time. What made you decide to retire here?

Doug: I was working in Olympia, Washington, and we were doing well in Seattle, but getting paid Olympia rates, if you know what I mean, so I finally just gave my notice. For the first time in my life my timing was right, because they blew up the station shortly after that. It was my last radio job.

We came to Chicago because my wife and I have friends and family in Milwaukee, and hey--if you could choose between Chicago (which is close enough) and Milwaukee, where would you choose? (Laughs). Actually we've been here now seven years, but we were really only planning on staying for five. I love it here, and it's been great, but we miss the mountains and salt water. I have a boat that I love, and I suspect we'll move back out west at some point.

Rick: You went to high school in the Chicago area (Bloom, and Homewood Flosmoor) in the late 1950s. Were there any air personalities on the air during that time that influenced you or your approach to radio?

Doug: Wally Phillips, without a doubt. I was doing a project for a church group and I needed some sound effects, and because I was a fan and knew that Wally used a lot of them, I just showed up at the station one afternoon and asked if I could see Wally. He gave me all the sound effects discs I could carry--and told me to bring them back when I was through with them. That was incredibly generous of him. Another person I listened to in those days was Howard Miller. He and Wally were the biggest stars in Chicago.

Rick: I know your radio saga has many stops in those early years including Iowa, Wisconsin, and Florida, but how did you get that first big break to return to Chicago at WDAI?

Doug: I was at WTMJ in Milwaukee at the same time Bob Collins was in Milwaukee, so when he was named the PD in Miami, we went there together. (Photo: Bob Collins, Doug Dahlgren & Dick Sainte). I was the morning guy. Bob was a great guy to hang around with, a turd to work for (laughs), but a great guy. It didn't last too long. They blew up that station, and Bob went back to Milwaukee. After it blew up in Miami, Gary Price called me. He was the PD of WDAI at the time, and asked me to come over and do mornings for him. Shortly after that, he was hired by WCFL, and brought me along with him.

Rick: It's safe to say you're best known in Chicago for your time at WCFL in the 1970s, when you were teamed up with Dick Sainte as Dick and Doug. How did the two of you become a team?

Doug: Dick was working in mornings with Tom Murphy and I replaced Tom, and I still don't know the story of why--of what happened there with him. But Dick and I hit it off right away, our timing was immediately perfect. We never stepped on each other. We became almost like brothers off the air. Later on, he lived in Oregon when I did too, so we'd see him all the time. He had a huge career after WCFL too. He passed away a few years ago.

Rick: Do you have any favorite memories from that WCFL era?

Doug: Every day was fun. We had a good time on the air, but we probably had even more fun off the air. There was a bowling alley in the building, and we hit that together a lot. We drove to the coast together (to SF) once--took a good week or more to get there--and had a great time along the way. We were hawking a syndicated show in LA one time--though that didn't fly. Every day was a gas. We had a great engineer at the time named Warren Callahan. Loved working with him. His relief engineer was Al Urbanski, and he was just great too. (Rick's note:My story about Al Urbanski & Ann Margret is here) John Tondelli also worked there. We had the best engineers in the business.

Rick: That job ended when WCFL abruptly changed formats and became a beautiful music station. I know that was a shock to WCFL fans. Was it a shock to you? 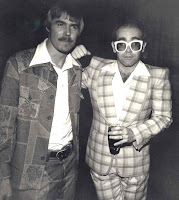 Doug: Yeah, we read about it in the paper in Gary Deeb's column. The next morning they held a staff meeting, and said "Sorry, it wasn't supposed to leak out yet, but that's the way it goes." Dick and I asked if we could have one more show together, and they said yes. Though, in the middle of that last show, they came in and yanked us off the air because we were talking about the format change. That was considered a big no-no. (Photo: Doug with Elton John)

Rick: I've watched that Steve Edwards/AM Chicago interview on YouTube a few times. (You can watch it here: Part 1 and Part 2). You both sounded pretty upbeat at the time, but you ended up having to go your separate ways, didn't you?

Doug: Nobody was knocking on our door. (laughs) Not for jobs anyway. Wally called us both up the next morning and had us on the air, and I still have no idea how he got our phone numbers. He reached me at my girlfriend's house. Then Fred Winston had us on WLS. That's when I met John Gehron for the first time. Fred asked us how it felt to be escorted out of the studio, and we said, it feels like this, and we carried him out and finished the show for him. (laughs).

Rick: After WCFL, you moved down the Chicago radio dial to WIND. What do you remember about those days? 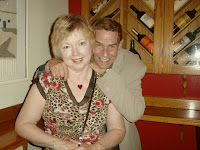 Doug: Connie Szerszen was doing the 6-10 pm slot at the time. (Photo: Connie & Doug in 2010). Bob Emery took over as PD, and fired Connie, the first time she had ever been fired, and since I was already on staff there, I was the natural successor in that 6-10 slot. There were a lot of stars on that station. We had Howard Miller, Clark Weber, even the weekends were great. It all ended when they decided to make the format "all talk". I went to WMET after that for a year, did mornings for Harvey Pearlman.

Rick: Is my memory faulty or did you also do voiceovers for WFLD at that time?

Doug: Dick and I did that when we were on the air together. We would go over and record tracks for the kid shows.

Rick: I was a kid at the time, I remember it well.

Doug: That was great fun. We got to work with Ray Barnas, and that was a thrill. Ray was the technical director of Don McNeils' Breakfast Club back in the day. After Dick went to San Francisco, I did the tracks by myself for awhile. Then they hired me as their full-time staff announcer, which I have to say, was about the dullest job imaginable. I did that for awhile, and they eventually fired me because I was so bored. I eventually ended up out West.

Rick: So are you really "officially" retired now..or could you be enticed back to terrestrial radio for the right offer?

Doug: Everybody's got their price, so never say never, but probably not. I may agree to some voice work, or do a show from home, but to tell you the truth, I haven't listened to the radio for years. When I listen now, it's all talk or all music, and there's nothing in between. When I was in the racket, it was possible to do both. Personality and Music. That's the kind of radio I liked to do.
Posted by Rick Kaempfer at 6:38 AM