Robin Baumgarten is the co-anchor of the WGN Morning News on Channel 9.

Rick: Your colleague, resident nutball/producer Jeff Hoover, once described you to me this way: "She likes to knock back a few beers and smoke a heater. She's not afraid to speak her mind. She kinda reminds me of my Dad when I'd have my friends over to the house and he'd be in the garage working on the car and his ass crack would be showing, and I'd ask him to pull up his pants and he'd say 'if you don't like it, don't look at it.'" Would you say that's a pretty good description, and would you like to retaliate and describe Hoover?

Robin: I would love to rebut all of Jeff Hoover’s comments, but my mom always told me: “Don’t talk about people in public. Be polite, and do it behind their backs.”

So behind his back, I'll say Jeff is the funniest, most talented segment producer in Chicago. But he's also a compulsive liar!

Rick: Of course, you and Hoover have something in common. You are both graduates of the Johnny B school of broadcasting. You were Johnny's traffic reporter for several years during your days at Shadow Traffic. Do you have any favorite memories from your years on the show?

Robin: I have such fond memories of that show – Johnny is the best.

I was new to the business, and Johnny, Buzz Kilman, and Bruce Wolf were all so accommodating about making me part of the team. It was a blast going to work every day. 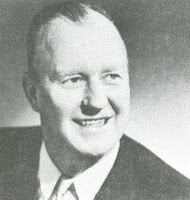 One of my favorite memories is of the Donny Osmond/Danny Bonaduce fight that Johnny organized at the old China Club. He brought in the late, great Jack Brickhouse as an analyst. As Jack was waiting to go onstage, and I was waiting a few feet behind him, he turned his head and “hocked a lugey” over his shoulder and it landed right on my shoe. No matter what else I do in this business, I'll forever be known as the girl that got “lugeyed” by Jack Brickhouse (photo). A true honor.

My favorite memory of Buzz is the time he went nuts when he found out the Subway Tuna Sandwich had more fat grams than a burger. Hysterical. He is truly one of the funniest people I've ever met.

Rick: Is there anything that the Brandmeier experience taught you about broadcasting that still helps you today?

Robin: The biggest lesson I’ve taken with me is how to think on my feet and how to laugh at myself. I hope at least a little bit of Johnny and Buzz’s impeccable comic timing might have rubbed off.

Rick: In 1996 you became a part of the WGN-TV morning news team, as an airborne traffic reporter at first. I've interviewed a few other reporters that have done the traffic copter thing, and they all claim that it's not scary at all. Do you concur, or were there mornings it got a little hairy up there? 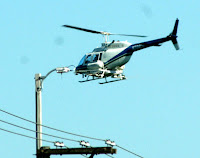 Robin: I can’t believe I actually spent close to 8 years in that helicopter! It’s amazing what you are willing to do when you’re young, and have no fear. Now that I have kids, I get scared watching Scooby Doo.

But, it was very safe, and still is. I’m very grateful to WGN pilot Mike Boyle, who is the best in the business.

Plus, I wouldn't have my current job if I hadn't been willing to fly. So, I'm glad I did.

Rick: I've always considered you an absolute natural on the air. Your personality really shines through on both radio and television. For some reason, most broadcasters have a very difficult time accomplishing that. How have you managed to avoid the "jive" pitfall?

Rick: Now don't go using that phrase. I own the copyright.

Robin: Paul Konrad says that was his nickname in college.

Thank you for the compliment. I give full credit to my co-workers on the show who make it easy. Larry, Paul & I have been working together for 15 years now, and they're like a couple of old shoes - in a good way.

The best training for a show like this, though, was trying to keep up with Johnny and Buzz.

Rick: The WGN Morning News is, in many ways, a morning radio show that happens to be on television. You do bits and get crazy, but then you still cover real news stories. Is it difficult to go from one to the other? You know, there's wacky Robin dancing with a Neil Diamond impersonator before the break, and then there's serious Robin telling us about a school killing after the break. Do you ever get broadcasting whiplash?

Robin: It took me a while to find that rhythm. Believe me, I’m no pro.

Maybe you’re familiar with one of my greatest hits bloopers? Mispronouncing Thailand (“THY-LAND”)? Not one of my better moments, but hopefully I’ve made some progress.

You just have to remember that despite the fun, 90% of the people are watching to find out the news.

Rick: The cast of characters on your show is pretty impressive: Larry Potash, Paul Konrad, Pat Tomasulo, Dean Richards, Jeff Hoover, Mike Toomey, and many more. Who runs the show, calls the shots, and has the final say on show content?

Or, the other folks would say that lovely girl named Sandy Pudar, our executive producer. But, we all have some input.

Rick: There have been some incredible moments in broadcasting on that show over the past few years. Do you have any favorites?

Robin: Gosh, it’s been 15 years. I remember Larry’s hair being taller than Kid n’ Play when we first started, and my southside accent being so thick that the only word I could pronounce correctly was “Pulaski.”

My favorites include covering the live plane jump of a giant tortilla chip into a bowl of salsa, and Tracy Morgan laying on our news desk pretending to be pregnant.

Currently, my favorite running joke is when Paul tells all the viewers that any of us who is taking a day off is out with “diarrhea." I know it’s juvenile, but still makes me laugh.

Rick: There was recently a rather awkward moment on the show too. You had Chet Coppock as a guest, and he had just written a book in which he called Pat Tomasulo one of the worst sportscasters in Chicago history. When Pat and Chet shared the stage it was tremendously awkward...reminded me of my Steve & Garry days. Those guys used to say that really awkward was almost as good as really funny, because people will always remember it. While I know they're right about that, it doesn't diminish the discomfort of the moment for those involved. You were sitting between them when it happened. What was going through your mind?

Robin: I'll have to give props to Steve & Garry - truer words were never spoken. It’s painful to be out there during an awkward moment, but at home, I know viewers are glued to the set wondering what's going to happen next.

I hated being in the middle because I love Chet (doing traffic on his show was my first radio job on the Loop!), and I love Pat. I think Chet was trying to sell his book and Pat was rightfully standing up for himself.

Awkward, painful, and good TV, all at the same time.

Rick: When you were a broadcast journalism major at the University of Illinois (you didn't think I'd do a whole interview with an alum and not mention it, did you?) and working at WPGU in Champaign, did you ever imagine that you'd reach this level of the business?

Robin: No clue. I was just hoping to star in a public-access commercial for my Dad’s tile store. I did...and look where it got me.
Posted by Rick Kaempfer at 9:03 AM