Jonathan Hood, J-Hood, is a talk show host at ESPN Radio in Chicago, AM 1000.

Rick: First of all, I have to tell you I'm a big fan of your Saturday morning baseball show with Bruce Levine. I listen to it every week as I'm driving my kids to piano lessons. It really is the best baseball show on the radio. I know that Bruce can be a little persnickety--but he really knows his stuff when it comes to baseball, doesn't he?

J-Hood: He certainly does. He's been the host of "Talkin Baseball" show for 19 years and he's been covering sports for over 30, so not only does he know baseball, but he knows the Chicago sports landscape better than most. From a baseball standpoint, nobody is more connected across the nation as Bruce is.

Rick: How would you describe your approach to doing that show? What kind of interaction do you and Bruce have during the week?

J-Hood: (Photo: Hood and Levine in action) My approach is no different than all of the other shows that I do. Preparation on not only the Sox and Cubs but of the interesting stories across the MLB scene. Baseball was my favorite sport to play and is my favorite sport to watch, so it's a labor of love each week to present talking points to the show. The only time that Bruce and I communicate about the show is right before our program starts. I believe we keep our opinions fresh for the air that way. Sometimes our opinions are not so fresh...and we end up having that not so fresh feeling. Rick, do you ever have that not so fresh feeling?

Rick: (laughs) I like talking to former producers that have stepped over to the other side of the glass. I don't know if you know this, but I actually cited you as an example of doing that in my book The Radio Producer's Handbook. How did you make that transition, and how have the skills you learned as a producer helped you on the air?

J-Hood: I always had a notebook next to me as a producer and by listening to the show that I produced or talk shows I would listen to, I would write down things that I would do or not do if I had the opportunity to become a talk show host. As a producer, your responsibility is to help show structure, help hosts with meaningful content and book guests that enhance the show- something that doesn't happen as often today as it was years ago in producers.

Doing all those things for various hosts and trying to do that at a high level, helped me prepare for the next level as an on-air host. If any producer complains about how bad his/her show is, they aren't very good at their job as a producer.

I worked with SCR and the One-on-One Sports (now Sporting News Radio) as a producer in mid 90's at the same time.There is nothing like the national radio experience. Working at One-on-One helped me understand the urgency to get things done and completed to better the brand.

Rick: You were at the Score for more than a decade. I know it's hard to isolate one or two highlights, but looking back on your years at the Score what are a few of your favorite memories?

J-Hood: The old WSCR emanated from 4949 W. Belmont in Chicago (photo). We shared the tiny building with WXRT. The Score during that time was so much fun. No air conditioning in the hallways and more times than not, that locker room atmosphere would lead to arguments and feuds. But as I said it was fun and memorable.

* Born and raised in Calumet Heights, I never traveled to the northside much so I was unfamiliar with a lot of the streets. When I was an intern, I was summoned to get Dan McNeil and Terry Boers producer Mike Greenberg (yes, from Mike and Mike) a beef combo sandwich from Roma's Beef. I had no idea where I was going. I got lost around the infamous six corners area, I was driving and lost for at least an hour before I found it. And not to mention, Greeny's food was cold by the time I returned. Ah, the days of no map quest, Magellan or Internet to help me. How did we ever survive?

* As an intern in 1992, I was part of the promotions team handing out Score 820 flyers to people in front of the Rock n' Roll McDonald's downtown...in the rain. Nothing like giving out wet flyers to try to market the station. (That was a lot of fun.)

* The Score going from 820 to 1160am was great! So many people were hoping that the station would go 24 hours and it happened. That was a great moment.

Rick: And now that you've been at ESPN for awhile too, I think it's safe to say that you've co-hosted a show with nearly every single sports radio host in Chicago. Which one do you feel you had the most chemistry with, and which one was the greatest struggle?

J-Hood: Man, that's a tough one Rick. I have had chemistry with almost everyone I've worked with. Chemistry on the air will always happen with two or three hosts on a show if there is solid content.

I enjoy working with former athletes. Stephen Bardo (photo), Doug Buffone, Eddie O, Raymont Harris, Howard Griffith and others. They are the easiest to produce for or host with in my view.

I would say the biggest struggle in my career was being a part of the Rick Telander Show. The issue wasn't Rick and Doug as much as it was the mixed messages I received from management on what our roles were on that show.

Rick: They say that tragedy plus time equals comedy. Has there been enough time yet for you laugh at the whole Webio experience?

J-Hood: No. The Chicagosportswebio experience was great for me at the time, because ESPN began cutting back on night time programming. I hosted 54 shows with Tim Doyle and I enjoyed them. I knew at some point that I would work again, but I felt bad for the hard working producers that couldn't find anything right away. Steven Goffman, who produced 2 shows- Fred Huebner/Matt Weber and my show with Doyle, just landed with ESPN 1000, 10 months after that debacle. So, if it seemed humorous from the outside that the majority owner left Chicago without paying over 800 employees, it wasn't internally.

Rick: All of you took a giant leap of faith going to Webio, and you were one of the fortunate ones that managed to land back at the station you left. I guess it's true what they say about never burning bridges. Was that a difficult call to make, and how did that all come about? 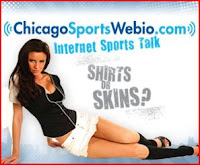 J-Hood: At the time, I was looking for a new challenge. Because of budget issues at ESPN, there were no opportunities for me to do many shows. I thought it was a great chance for me to be apart of something new. Mike North asked me to be apart of this new venture and I agreed. It was a great opportunity to do a 4 hour show in mid-days, the prime slot of Webio during that time. Webio was a great idea and was ahead of its time, however, the management that was running it, left a lot to be desired.

Webio, for some odd reason, had people at both sportsradio stations concerned about the content on the station, the sales/sponsorships and the marketing that they got. With the proper backing, Webio could have survived but it didn't.

I'm grateful to ESPN 1000 and Justin Craig for allowing me to return. The ESPN brand is stronger than no other in sports and I love being part of the family.

Rick: You're a native Chicagoan, which is always an advantage in this town. On a sports station it's especially helpful, because you can relate to the pain, agony, and ecstasy of the average Chicago sports fan. You've also had a front row seat, so to speak, to most of the sporting events of the past two decades. What are some of your favorite moments as a fan?

J-Hood: Being at playoff games during the 2005 White Sox season. I'm a huge Sox fan and to see my favorite team climb to the mountain top, it was a joy.

I loved the first Bulls championship because of the struggle they had with getting past the Pistons. To see Michael Jordan and the Bulls finally win a title was great!

The Bears championship in 1985 was so much fun because they had so much personality, not to mention dominant on both sides of the ball. I'm glad my favorite NFL player, Walter Payton had the opportunity to win a Super Bowl.

Rick: Growing up in Chicago were you a fan of radio? If so, who did you listen to? 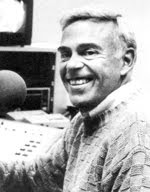 J-Hood: I had to be the only kid on my block that listened to talk radio.Sports and political talk. In the 80's, the talk shows were fascinating to me because there was so much talk about the politics of Chicago and the state of Illinois. It's something that you don't hear a lot of anymore.

I'm still a huge radio/internet/podcast listener to shows across the country.

Rick: You're not just a radio guy anymore. You blog for ESPN.com and you've branched out into television too. How are you liking some of the other media, and do you ever see yourself more aggressively pursuing a career in something other than radio?

J-Hood: I love just about everything about the business. On-air, t.v. or blogging it's in my blood. I told my wife Michelle before we were married that we can get married, but you have to know I have another love in my life and that's the broadcasting business. She was fine with that, thankfully. I have my own website now-jonathanhoodshow.com so that helps me write about hot button issues at my leisure.

You never know in our crazy business. I enjoy doing all forms of media. When I'm not hosting, I work the media ministry for my church editing church programming, which I enjoy very much. So on-air or behind the scenes, I love the business.
Posted by Rick Kaempfer at 11:06 AM