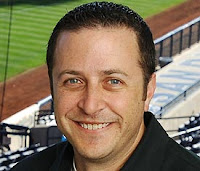 Andy Masur is the radio play-by-play man for the San Diego Padres, but got his big break in his hometown of Chicago, at WGN-Radio.

Rick: First of all, belated congratulations on the San Diego Padres gig. Is this really your fourth season already? How are you liking it out there in San Diego. I hear the weather is terrible.

Andy: Thank you very much. Yes, I can’t believe that I’ve started my 4th season already either. Seems like only yesterday I was packing up my place in Chicago and moving across the country. I’m really enjoying things in San Diego. It took a little time to get used to the different pace on the west coast, but I’m all good now. Great people to work with, a good young team and oh yeah, the weather certainly is an added bonus.

Rick: How would you compare and contrast San Diego Padre fans with Cubs fans?

Andy: It’s a difficult comparison. The Cubs have been around for over 100 years, the Padres are only in their 42nd season, so there is not a ton of history to go on with the Padres. Cubs fans are a special bunch, rain or shine, win or loss, weekday or weekend, they show up to the ballpark. Wrigley Field is iconic and a great place to work and to watch a game. There is always a buzz surrounding the atmosphere there. People from all over thanks to the wide appeal of WGN-TV and WGN Radio, plan vacations and trips just to take in a Cubs game.

It’s a little different in San Diego. There are many things to do in town that don’t involve going to a game. Beaches, parks, and just the weather in general make it a secondary thought sometimes to go to a game. In San Diego, management understands this, and that is why it becomes so important to put a good product on the field. Not saying that it isn’t the same in Chicago, but it is critical in San Diego. Promotions, affordability, and a good product create the fan base, which is still growing with the Padres.

Rick: I know you grew up a Cubs fan. Do they ever make you say nice things about Steve Garvey, and if they do, does it make you sick to your stomach?

Andy: That is a funny question! My first year, one of my radio partners Ted Leitner, was giving me a hard time about it (jokingly of course) one night. He had this look on his face as if to say “I’ve got a surprise for you”, and sure enough, Garvey walked into our booth. Ted made sure I shook Garvey’s hand and we had a good laugh about it. Let’s put it to you this way, it was a difficult moment. To make matters worse, last year while the Cubs were in San Diego, the team celebrated the 25th anniversary of the 1984 Padres. Ouch! But in all seriousness, you have to be able to separate your feelings. I’ve come to know Tony Gwynn Sr, and also Tim Flannery from that ’84 team, and they are good people and have been a big help to me. Don’t think though, that I don’t remind them both constantly that they ripped out my heart that season!

Rick: I just interviewed Pat Hughes not too long ago and we discussed the one inning a game that he takes a break. His break really turned out to be your big break too, didn't it? 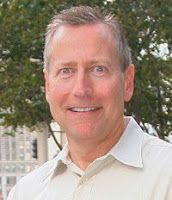 Andy: It certainly did. I can remember when Dave Eanet (photo) the sports director at WGN radio asked me if I would mind doing a half inning of play by play in addition to my pre game and post game responsibilities, I’m not sure the entire question came out of his mouth before I said, I’LL DO IT! People may not realize how tough it was though to do just 3 outs a game. It was difficult to get into a rhythm with anything, but hey I wasn’t going to complain. It was such a pleasure to share the microphone with Pat and Ron. Imagine me, a kid growing up in Chicago, now in the booth as one of the announcers. It was amazing. The break certainly worked out in my favor and I can’t thank everybody there enough.

Rick: I'm guessing that working in that booth with Pat and Ron was a great learning experience. What are some of the things you learned from them that you've incorporated into your own approach on the air?

Andy: Pat was such a great mentor (and still is), he taught me more than I even realized back then. He has an ability to make the game come alive. From the descriptions of the uniforms, to the ivy on the wall you can actually see the game on the radio. Pat also has great command of the game. You always know what is going on, where the ball is, what the score is and the situation. He knows a lot about the strategy in the game and about it’s history. Pat is always prepared. He also has a great rapport with Ron. Pat treats Ron with great respect, and never puts him in a bad situation on the air.

I’ve tried to incorporate some of Pat’s traits, but at the same time, still you have to be yourself. I don’t want to be a Pat Hughes impersonator, but I think Pat is one of the best in the business and why wouldn’t I want to use some of his knowledge? I can’t even really begin to count the things I’ve learned from him. We stay in touch, and I couldn’t ask for a better role model in this business than Pat.

Rick: The years you were at WGN were a roller coaster ride for Ron Santo; from the lows of his health problems and the Hall of Fame snubs, to the highs of the day his number was retired, and the Cubs 2003 playoff run. Was that time an emotional time for the rest of you in the booth too?

Andy: First off, I must say, that Ron Santo is one of my heroes. Not for his play on the field, but for his work and passion off the field. He was a great player, no doubt, but he’s an even better person. Ron is one of the toughest human beings I have ever met. With all the physical problems he’s encountered over the past 8 or so years, I never once heard the man utter the words “why me?” Never. That’s a quality few people have. I think about Ron every day.

As far as 2003 goes, I’m just now finding that I’m able to talk about the year and how it started and finished. Ron’s Hall of Fame snub in February of that year was devastating to all of us in the booth. He really felt that it was his year. It didn’t happen. The Cubs played remarkable baseball that season, and I’ll never forget after they clinched the division with the double header sweep of the Pirates, how many of the players I interviewed in the clubhouse, were saying “this is for Ron”.

I remember the next day, when Ron’s number was retired, looking at the sign on the fence behind the bleachers in left field “Ron Santo a perfect 10” and thinking, this has to make him feel 100 feet tall. It did. An honor well deserved.

The shame of it all though, was Ron didn’t get to enjoy the playoffs in the booth. Another health scare kept him out, and all of us in the booth, from Pat to Matt Boltz, were devastated that Ron wouldn’t be with us. I’ll never forget Pat’s call at the end of the Braves series, “Ron Santo this one’s for you!”, I still seriously get choked up just thinking about it.

So to answer your original question, yes, it was a great year, but a very emotional year for all of us.

Rick: You've done quite a few different things in your radio career--everything from DJing, to traffic reporter and news anchor (at Metro), to sports anchor (at WGN & Sporting News Network), to play by play man. Is baseball play by play the job you've always wanted, or did you just happen to fall into this? 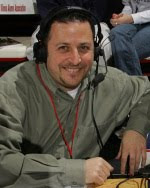 Andy: Baseball play by play was always my ultimate goal. I took a rather curious route to the booth, but I think it just proves that there is no right way or wrong way to get there. I had a blast in my early and mid 20’s playing top 40 music in Peoria, Illinois. When it was time for a change, I moved back to Chicago with the goal of getting on the air in a major market and I was able to do that with the Metro Networks traffic job. That morphed into a shot at doing sports thanks to current Bears play by play voice Jeff Joniak, who took a chance on a “green around the gills” wanna be sports guy. I worked hard at perfecting the craft. That eventually led to my job at WGN. My first play by play job in town was doing Loyola University basketball games, and after a season with the Ramblers, the play by play bug bit me. I think because I showed I could handle it, the powers that be at WGN felt comfortable with me doing the half inning of Cubs games. I don’t think any of us, including me, thought that the leap would be as large as it became.

Rick: It's not an easy job, either. How has that transition gone for you, now that you do it full time all season long?

Andy: The transition has gone well. I think I have it a bit easier with only doing play by play and a little work on the pre-game show. In Chicago I was basically the station’s Cubs reporter and had to go to the locker room after the game and file reports for the various sportscasts on WGN. Now my only real responsibility is doing the games, and I really enjoy that.

It took me a full season and almost midway into the second season of Padres games to really feel comfortable. They say it takes a baseball player around 500 at bats to feel like he belonged; well it took me nearly 500 games before it became like I felt I belonged. I really feel like I’ve gotten into a good groove now and I’m relaxed and really enjoying my job. Not to say that I don’t continue to work to be better, because I do, every day. I’m still very tough on myself, I listen back to innings, and calls every once in a while, just to see what I could have done better.

Rick: Do you make it back to Chicago in the off-season?

Andy: Yes I do. I get back usually a couple of times, once after our season ends and then once again around the holidays. I need to get my fill of winter and fall you know. All my family still lives there and it’s always great to be able to come home.
Posted by Rick Kaempfer at 8:08 AM