Rick: I know you're a life long Chicagoan (Wonder Lake). Who did you listen to on the radio before you got into the business?

Justin: When I was 10, it was all Z-95. Best station ever. And my early teens were all about The Blaze. Wonder Lake loved The Blaze. Then I fell in love with talk radio when I hit high school. I remember skipping class to go see Steve & Garry open Gurnee Mills. I was a pretty big Kev-Head back in the day too. I convinced my principal to let me do the morning announcements and I wasted the opportunity by just copying Kevin Matthews. I was quickly removed.

I ended up at Columbia College in the Radio department and was exposed to much more, including WBEZ.

Rick: Since December, you've taken on a much bigger role at WBEZ, Executive Producer of Middays. At other stations that would mean producing one show. At WBEZ, you're overseeing three of them. Please tell me you have a staff of people working for you.

Justin: I have five segment producers, three directors, three web producers and three hosts. So we have plenty to make great radio. It's actually liberating not working for one show. It forces a producer to really own their segment. We would never be able to pull off this kind of system without experienced producers and directors. Can I name them all? Seriously, they need to be named: Robin Amer, Steve Bynum, Joe Deceault, Kate Dries, Andrew Gill, Jason Marck, Eilee Heikenen-Weiss, Katie O'Brien, Alexandra Salomon, Carrie Shepherd and Becky Vlamis. Pay attention to those names. Best staff in radio. It's the public radio equivalent to the Green Bay Packers coaching tree (that makes me Holmgren).

Rick: One of the midday shows is the new Steve Edwards afternoon show, which isn't really a midday show at all, but I digress. I've been a big fan of Steve's for years. How would you describe his new show, and how does it compare to his former work on 848?

Justin: I worked as a producer with Steve on 848, so we know each other well. Steve (photo) was unbelievable on 848, but Afternoon Shift is really his show. First off, Steve was at the table in creating this (he was hired as second host on 848). So he had major input on what he wanted from this new vehicle. Steve is one of Chicago's best interviewers. He stands out because of his knowledge, experience and preparation. There is almost nothing he can't do. He doesn't just do great interviews, but he's a great performer. He treats the show like a performance. And that is seriously refreshing. So it's my job to match that energy and performance by creating segments and booking guests that are going to rise to that level.

Rick: I was a guest on 848 years ago when Steve was hosting the show. Now Tony Sarabia is at the helm. How has the show changed over the years, and where do you see it going from here?

Justin: 848 has been on the air for over a decade now~? It started in 1998. That's unbelievable. And it has seen its share of hosts. Jan Coleman, Steve Edwards, Gabe Spitzer, Richard Steele, Alison Cuddy and now Tony Sarabia. So with each host comes a new wrinkle. I've worked with Tony my whole career. With Tony, we are planning a new style of 848. Live, live, live. Live music, live interviews, live call-in. He is a great host and a great co-worker and you can throw anything at him. Another HUGE part of being a talk show host. Tony goes with the flow and has the experience from covering Chicago news and culture for over 20 years to make great radio.

I would like to see us come up with a new name though. I love the show, hate the name. I can say this because I was one of the founding producers of 848. And the old story goes that it was my idea (the name). So Torey, if you are reading this? Let's come up with something new...without numbers.

Rick: This obviously isn't your first job at WBEZ. You've been there for nearly twenty years. Describe the evolution of your WBEZ career.

Justin: I'll try a quick version: I started in talk radio (Talk of the City with Richard Steele, anyone?) and then produced Metropolis with Aaron Freeman and the John Dempsey Show. I then was a founding producer of 848 and then left that post to produce the short-lived and much loved/hated comedy show Schadenfreude. When that show was canceled, instead of firing me, WBEZ moved me to run their web site. At that time, the site was just directions to the studio and a big "under construction" sign. So my team created the system that started putting all of our produced content online. I then managed and grew the site, created the Vocalo blogs (with Robert Feder) and ran the WBEZ site up to last year. And after all that? They pulled me back into talk radio. End of paragraph.

Rick: You mentioned your group Schadenfreude. If you could pick out just a few Schadenfreude highlights over the years, what would they be?

Justin: I met some great people when I took classes at Second City in the mid 90s. We worked together as Schadenfreude ever since. We do sketch comedy and we still perform today. Highlights? I gotta say - running our Alderman character (Alderman Ed Bus) for mayor after Daley left was a ton of fun. We got a lot of attention and were invited to roast the outgoing mayor at a retirement party. I've never been so scared in my life. And of course, this viral video was a roller-coaster ride. Everyone thought it was real. Kate still gets called out on the street today:

Rick: I've always enjoyed your writing on the WBEZ blog--and the work of people like Claire Zulkey, and Lee Bey. Is part of the plan for the future to further integrate the digital portion of WBEZ with the on-air and vice versa? 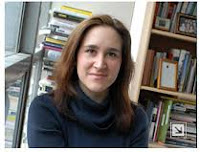 Justin: Well, I brought all the bloggers in and now I want to use them on the radio. It's just that simple. Really, they were hired with that in mind. They had to be great performers in multiple forms of media. Claire Zulkey (photo) has a great live show at the Hideout called Funny Ha-Ha. So she knows how to write and perform. Lee Bey has a weekly spot on Fox News Chicago. So we hire bloggers with the goal that they can be used on the radio. We weren't really connecting that way before. It would take a lot of work just to get a blogger on-air, even if their story was great. And most of the time, the shows wouldn't be interested. It was a bit frustrating, especially with some great investigative work going on with our blogs (Feder, DeRogatis, etc). We've changed that. Now I've even taken some of our on-air contributors and made them bloggers. It just makes more sense that way. And more importantly, we are starting to get our producers and editors writing up segments before they air. So creating blog posts to start the conversation before the live radio happens. It creates awareness and a conversation that just continues on air and then keeps going on-line. That's something that would have never happened 5 months ago.

Rick: One of the constant pressures at WBEZ is funding. I know that the government only provides a small percentage of funding to NPR, but what are your thoughts about the current debate going on in Washington?

Justin: WBEZ is a major market radio station. If government funding was cut, we would find ways to survive. But the worry is that a wholesale cut to government funding would destroy smaller market stations. And those stations are really doing great work for their individual communities. Public radio has a mission. It's to serve the public. It would suck if you forced them to air commercials for Viagra and E-Trade and play Katy Perry once every 40 minutes to stay afloat. Right?
Posted by Rick Kaempfer at 6:30 AM