I interviewed former WLUP and WXRT veteran Dave Benson two years ago for Chicago Radio Spotlight when he was the program director of KFOG in San Francisco. He was let go in the spring, and re-emerged in Seattle over the summer. I asked him to tell me about the journey, which I have been following on Facebook. He handled the situation in a way only Benson would handle it...

Dave: Well, things at KFOG came to an end in mid-April. Cumulus told me I'd done a great job (KFOG was # 1 in demo in April) but that I "just wasn't their kind of guy," so they didn't offer me another contract. That was fine with me. Over the 3 years of Cumulus' ownership the company's priorities and capabilities had become clear. Cumulus is a broadcast property consolidation company. Quality, localized programming isn't something they excel at or seem to aspire to. And the reality of their precarious financial position just made them more and more desperate, which lead to even more screw tightening and fear-based decision making. I had a great run at KFOG and hated to leave those good folks behind but I also looked forward to a break. I hung out a bit, walked the dog, rode the bike and just enjoyed living in my home during daylight hours.

I decided to take the kind of trip that you can only do when you've got enough time, so I got ready to go and then got a call from the good folks at Entercom. They were interested in having me join them in Seattle and they were willing to be patient while I took my trip. We made a deal and I took off for about 6 weeks, going to New York, London, Paris, Istanbul, Kuala Lumpur, Vietnam, Hong Kong and Japan. I landed in Seattle on a Friday in late July and went to work the next Monday. I feel very fortunate to be able to go back to work with a company that aspires to quality broadcasting. And the move to Seattle feels great. I'm among friends and talented radio folks once again and I look forward to the work and life in this area." 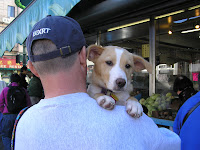 Dave Benson was in Chicago radio for parts of three decades. He is now the program director of the legendary rock station KFOG in San Francisco.

(Benson is the one wearing the hat in the photograph.)

1974-1976 - KGB-FM, San Diego - Full-time announcer working for the legendary Ron Jacobs. KGB was designing the template for what formatted rock stations were to become. 80% of what I know about how radio works, I learned at KGB.

1976-1979 - WIBA-FM - Returned as program director, which meant I opened the mail and made out the announcer schedules. We had fun.

1979-81 - WMET Came to Chicago from Madison, Wisconsin. I was hired to do production and weekends but became the station's music director pretty quickly. Worked for two general managers and 3 program directors in this short period of time. The week I moved to Chicago, Steve Dahl blew up some records at Comiskey Park. (Whatever happened to him?)

1983-86 - WXRT Worked as a full time announcer doing all of the fill-in shifts. Saturday morning, Sunday middays and Monday night overnights + all of the vacation fill-in shifts. I remember having to set my alarm clock for a different time everyday. It was like having jet lag constantly.

1986-1992 - WLUP - Music director and weekend airshifts. This was like high school with money...or maybe reform school with better food and drugs.

1997-2000 - KBCO, Boulder, Colorado - Realized that I ought to stop telling folks how to run radio stations and try to run one myself.


Rick: People still remember you from your days at WXRT and the Loop in Chicago. What are some of your fondest memories from those days?

Benson: WXRT was and is a charming anachronism. The station is the physical manifestation of Norm Winer's (photo) brain; a sincere, intelligent, well-intentioned, erratic, musical mess. The station's format - the actual directions that the announcers were supposed to follow to avoid Norm's wrath - had never actually been written down. It was an arcane, oral tradition passed along from announcer to announcer like verses from the Talmud. It was a blast! The last bastion of commercial radio where the announcers chose all the music for their shows. I am very grateful and proud of the time I got to spend within the confines of that funky little dump of a building on west Belmont Street.

One afternoon, I called Norm Winer up from the payphone in the bleachers at Wrigley Field and told him I was leaving WXRT and going to work for the dreaded Loop. Norm told me I was a traitor and a fool. I made the move from west Belmont to Michigan Avenue and it was a whole new world. I wish I could give you just one "fond" memory of those years, but there were so many wild and, frankly, unmentionable stories from those years...like that Christmas Party at the Hunt Club where the sales department decided it would be funny to splice in scenes from gay porno flicks into the station's year end promotional video...Greg Solk managed to keep the lid on the place, but just barely.

Rick: But you always held your own. In a station filled with razor sharp tongues walking the hallways everyday, I always thought you were the razor-tongueyist (yes, I know that's not a real word). Did that ever get you in trouble?

Benson: It was nearly impossible to get in trouble for saying something outrageous at the Loop. My God, Steve Dahl called Wally Phillips an "ass wipe," on the air! Working at the Loop required that you be ready to defend your turf, verbally or otherwise, at any moment.

Rick: At one point, you and Bob Stroud were roommates. I always pictured the two of you as Felix and Oscar. Is that an accurate description? Do you have any good Bob Stroud stories from those days?

Benson: It is the perfect characterization. Bob (photo) is, how do you say...fussy? And, I was, well, less fussy in those days. We went on a two week roadtrip to Florida - via New York City - in a flesh colored station wagon with fuzzy dice hanging from the rear view mirror. I brought a gym bag and a copy of Kerouac's "Dharma Bums." Bob brought 4 pieces of luggage including one suitcase devoted entirely to shoes. Bob Stroud saved my life once or twice and I am eternally grateful for his patience and his friendship through the years.


Rick: By the way, I asked Stroud about you--and he told me a story about a Korean restaurant, and said 'If anyone in Florida ever says they love Lyrnryd Skynryd, Benson will tell you what he really thinks.'

Benson: Yeah, someone served us collie meat in a Korean restaurant in North Park one night. We thought we were in a Chinese restaurant...stupid white guys. And, I got knocked off a barstool in Florida one afternoon by telling some redneck that Molly Hatchet couldn't carry Lynyrd Skynyrd's jockstrap.

Rick: People may not realize that you and Greg Solk were the guys behind the music at the Loop in the late 80s and early 90s. You've been programming stations ever since. How has your music programming philosophy changed over the years?

Benson: Greg taught me a lot about radio. He grew up in a radio station and has nearly infallible instincts about programming and how to manage talent. He was also one of the rare program directors who could actually verbalize what sort of music he wanted the station to play and to look for. It made the music director's job so much easier. And, it helped me understand that it wasn't about what I liked musically that was important. My job was to find music that worked for the program. While i enjoy the music that I play on KFOG, my personal musical preferences are quite different. I play the Goo Goo Dolls at work and Thelonious Monk at home.

Rick: I love the story about how you broke into radio in the first place. Would you mind telling the story about your high school newspaper, and how that led to your radio career?

Benson: When I was a senior in high school, I wrote an article about the new "underground" radio station that had just appeared on the FM dial in my hometown of Madison, Wisconsin. (In 1971 it was a revelation to hear Jimi Hendrix and Savoy Brown and Phil Ochs coming out of your radio.) So, I talked my way into the station to interview the program director, Stryder - the whole staff had names like that: Croyd, Riff, etc. Well, at the end of the interview, Stryder invited me to visit the station anytime I felt like it. I came back the next day...and kept coming back until they hired me for the midnight to 2am shift on WIBA-FM. I became the station's first music director and, eventually, the program director.

Rick: In a lot of ways you would be considered a "free spirit." You were a tour manager for the Pat Metheny Group for a couple of years. You rode around the country for a year and a half in a jeep--reading books and riding your bike. Yet, you're the boss man at KFOG in San Francisco, one of the most respected radio stations in the country. Does that "free spirit" side of you influence your management style at all?

Benson: I've been fortunate enough to follow a path in this business without ever having to look at the map beforehand. If I'm a good manager, I hope it's because I try to remain mindful of the talent of the people I work with and respectful of the audience we work for. In Zen there's a saying along the lines of, "if you want to control your cattle, take down all the fences." I think I try to let people and situations find their own space and solutions before I try to rein them in. Seems to work for me.

Rick: You've been out of the market here now for fifteen years or so. What do you miss about Chicago?

Benson: The Bucket of Suds, long-legged women in red dresses crossing Michigan Avenue on hot Saturday nights, the Park West, Nick's Bar, the bleachers at Wrigley, Lake Shore Drive, Clayhead, the Jazz Workshop, May, June & July, The Billy Goat, Michael Jordan and the Bulls 1991-1993, my hair...
Posted by Rick Kaempfer at 12:09 AM