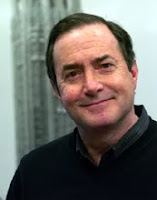 
To avoid confusion, since both of us are Rick K, I'm going to use our last names instead of first names.


Kaempfer: I first met you twenty years ago or so when you and Dennis DeYoung guest-hosted a show for Steve & Garry at the old AM Loop. I ran the board for that show. I remember you were both understandably nervous because 4 1/2 hours is a lot of air time to fill. But before the first hour was up, it was obvious that you were a natural. Do you remember that day?

Kogan: I remember that day very well and can’t believe you thought me anything other than in over my head. Dennis kept me afloat and could not have been a better co-host. I do remember taking call after call after call from his fans and relatives. We did it as a lark, never imagining it might lead to anything else in radio.

Kaempfer: I was a fan of the "Media Creatures" show you hosted a few years later on AM 1000 with Richard Roeper and Kathy Voltmer, and then later brought to television on Bob Sirott's Fox Thing in the Morning. It was the first show about the media that I can remember. How did that show come about, and what are some of your fondest memories of it?

Kogan: Media Creatures was the creation of Mitch Rosen (program director of AM 1000 at the time). I knew Richard only to say hello before Mitch put us in a studio and let us have at the microphones. It was an instant click, with me skewing, I think, a bit older than I was and Richard a bit younger than he was. Kathy (photo) was a delight to work with and I do think the show, 10-2 weekdays, was a valuable addition to the airwaves. Thanks to a great producer, Michelle Carney, we snagged a lot of good and high-profile guests.

Sadly, the station changed format and we were gone after six months. Bob (photo) was a huge fan of the show and had us come in the Fox studios and do a couple of live segments. I had done a considerable amount of TV work as an on-air entertainment reporter for WBBM-Ch. 2 in the late 1980s but didn’t like the in-studio format for “MC” and so, somewhat cavalierly, I suggested doing weekly remotes from the Billy Goat. Thanks to the astonishing talents of producer Jim Wiser, we were able to pull it off. Richard didn’t much like my smoking, on air or off, but we both loved doing those segments and the special that won an Emmy. We quit when Bob left the show. He was an essential element.

Kaempfer:You're currently hosting the show "Sunday Papers" on WGN Radio. It must not be easy getting up that early on a Sunday morning--especially for a night owl like yourself. (Full disclosure: I have shared a late-night cocktail or two with Rick in the past). I know you do a lot of the prep work for your show during the week before you arrive, but how hard is it to get up and going at that hour?

Kogan: When former WGN program director Mary June Rose asked me to host a Sunday morning show I had to be convinced that someone other than those who had just closed the 5 a.m. bars would be listening. Having done that many times myself, I did have to alter a bit my Saturday night activities, trying to get to bed by 10 p.m. It’s probably added a few years to my life and, frankly, it’s not difficult getting up because I look forward to meeting new people (guests).

Kaempfer: How would you describe your show to the uninitiated?

Kogan: That’s a tough one. An eclectic cultural mix; a gathering of writers, artists, actors, poets, musicians and other creative types, built on the foundation of a deep affection for Chicago and its history.

Kaempfer: I can tell you one group of people that are huge supporters and ardent defenders of your show: Authors. I have several author friends that have appeared on your show, and we've all come to the same conclusion: Sunday Papers is the most author-friendly radio show in Chicago. You even read the books! Sad to say, but that's almost unheard of in this day and age. Has your own experience as an author (doing the publicity tours) affected the way you treat the authors on your show?

Kogan: That’s very nice to hear. I learned a valuable lesson many years ago, after Studs Terkel (photo), as a favor to my father, Herman, his great friend, interviewed me about my 1979 book “Dr. Night Life’s Chicago,” a guide to local taverns and saloons, with an introduction by Mike Royko. It was a magnificent show. I was humbled that Studs read from the books and selected all manner of appropriate music. I was stunned afterward and asked, “What’s the secret? Why was that so damn good?” “Read the book,” Studs said. “Read the book.” And so, that’s what I do. I read the books. My own experiences as a traveling author don’t really play into it. I don’t expect others to have read what I write, sadly.

Kaempfer: I'm currently researching Chicago history for my next novel, and it seems like every book about Chicago has a Foreword written by you. I know you've written 12 books, but have you kept count of how many Forewords you've written? And are you working on another book yourself?

Kogan: I have not. I never have taken any money for such chores and will only do so for books and authors I admire. I am currently writing, and am humbled to be doing so, an introduction for the University of Chicago Press’ republication of Royko’s first collection, “Up Against it,” first published in 1967 with an introduction by Bill Mauldin. Charles Osgood and I (photo) have a brand new collection of our Sidewalks columns coming out soon, cleverly titled “Sidewalks II” and I continue to slog away on a novel.

Kaempfer: I thought the obituary you wrote for former WCKG host and Tribune writer Terry Armour was beautifully written. In the last ten or fifteen years in addition to Terry, we've lost some of Chicago's media treasures, many of whom were also your friends. Mike Royko, Tim Weigel, Gene Siskel, Kup, Studs Terkel, Bob Collins, the list goes on and on. Do you think there is a new generation of writers and broadcasters that can have the same kind of impact they had, or are they part of Chicago's last great media generation?

Kogan: I do think we have seen, and may even be part of, the last great media generation in this city. Those you mention, and I wrote the obituaries for all of them except Collins (I did an in studio piece about him the morning after his death), and you could certainly add Ann Landers to that list, were devoted to varying degrees to the business and I have watched too many talented young people walk away from the what has become a relatively homogenized radio world, a gasping newspaper industry, a fractured TV market. Those you mention were people of great character, and thinking about them now I am not sure any could find jobs (no college, not attractive enough…etc) now in the fields in which they became giants.

Kaempfer: You were there for the sad demise of the Daily News in the late 70s. Do you think Chicago is destined to be one-newspaper town, or is there a chance we can save both of them?

Kogan: That was not a good time, the folding of the Daily News, and I fear that I might live to see a no-newspaper town. I am confident that journalism, reporting, narrative storytelling and all the other elements that are stuffed into the daily miracle that is a newspaper will remain but as for picking up a paper on the corner for a few quarters, I have my doubts.
Posted by Rick Kaempfer at 9:15 AM