Len O'Kelly worked in Chicago radio for the better part of two decades, and is now the morning host and program director of WFGR in Grand Rapids

Rick: You were in Chicago radio for many years as a jock and a programmer, and now you're a jock and programmer in Grand Rapids, Michigan. Kevin Matthews recently got a little heat when he said that the Grand Rapids market was even more competitive than Chicago's market. Was he right? 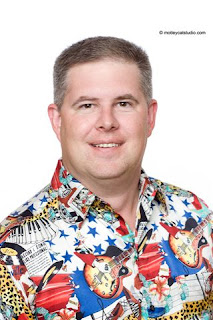 Len: This won't make me any friends in Chicago, but he was absolutely right. There is some outstanding talent in this market. The guys down the hall from me, Free Beer and Hot Wings, syndicate OUT of GR into Philadephia, among a number of markets. Heritage morning shows that come here, build a following, and stay put. The "Dave and Geri" show here just left the airwaves after 20+ years in mornings.

Not only is it more competitive, we have to work a hell of a lot harder. Grand Rapids is a "big small town." The first time I came here from Chicago, I naively figured I could just build a great sounding radio station and win with it. Wrong! You MUST get out there and get involved, meet listeners and clients, join organizations and committees - be a part of the city. It's all but impossible to do that in Chicago.

Rick: You were the music director of WJMK when it was an "oldies" station, the production director of Real Oldies (1690AM), and now you're programming an oldies station in Grand Rapids. What have you taken from those two Chicago Oldies experiences to WFGR? 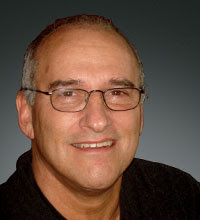 Len: I had an amazing opportunity to work with some of the most legendary names in the business. Landecker. (photo) Biondi. Uncle Lar & Little Tommy. Herb Kent. Guys whose headphones I shouldn't be holding, let alone working on an airstaff with. Just watching how seriously these guys took the business gave me a tremendous respect for what I do, and I remember that each day.

I started at WJMK on my 27th birthday. I was less than half of the age of guys I shared the stage with, and learned an awful lot. With maturity does come education. Now, I have a young staff - there are kids on the promotions staff that are younger than my career - and I wear the mentor hat.

For better or worse, "Jack" changed how I think we have to look at the Oldies format. At WJMK, it was my job to get the "You play the same songs over and over" calls. Our slogan at WFGR is "1,000 Different Oldies Every Week." I count the titles, get to a thousand... and still get calls complaining about the repeats. You simply have to go deeper and jog the memories of the folks in the Oldies target - there is no room for complacency. So far, it's working: with adults between 45 and 64, we won the Spring book here outright. It means I have to keep finding "new" oldies.

Rick: WJMK dropped it's Oldies format, a decision I'm sure they now regret, especially since True Oldies is in town now and they can't go back to the format like WCBS did in New York. What are the attributes of the oldies format that the suits in New York just don't understand?

Len: Funny you ask that - I found an old article from Billboard when I was at WJMK. Here I am, quoted as saying that "within a few years, the agencies will have to adjust their targets to buy stations delivering 35-64 year olds as the Baby Boomers age." It didn't happen - oldies stations got "too old," and companies like Clear Channel and CBS dropped those folks like rocks.

Here's the secret - those folks have all the money. Generation X will not do as well as its parents. It's been a real education for me to sit down with young sales reps and explain that the format can sell products other than nursing homes and cremation services. My listeners are spoiling grandchildren rotten! Sell 'em the same stuff you attempt to sell the parents! I don't think that the larger companies have the patience to adjust their sales training. It's easier to dump an airstaff and go automated.

I had a sales rep in Chicago the last go-around that didn't recognize Ringo Starr. Not "who's the guy in the picture?" - the question was "what did he do?" No wonder they couldn't sell time on the station. This format is all about passion, and that has to start at the corporate level.


Rick: You were also the program director of the River here in suburbs for awhile. Tell us a little bit about the whole suburban radio experience, the challenges, the rewards, the not-quite-ready-for-prime-time stories. 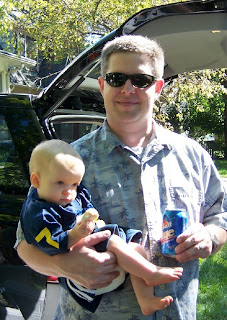 Len: One day I got a little frustrated and blurted out, "Well, I always wanted to go back to college radio..." The guys there never let me forget it.

The River was a fun time, actually, and my only regret was in the pocketbook. We put together, I thought, a decent-sounding radio station that took some musical chances I wasn't hearing coming out of downtown. Had Arbitron consented to make Aurora-Naperville an embedded market (which it ought to do), I think we'd have made a killing.

The biggest challenge? There's just not much money in suburban radio. I got a lot of calls from a lot of great talent who I scared away when it came to talk cash. We were able to get some great results from people who were willing to work hard and not mind the bathrooms (which scared away at least one jock). I found myself in a more unusual role - I had gotten used to the quirks of veteran talent. I had to re-adjust to the quirks of a young staff - dating, breakups, etc. Being the "old married guy", I seemed a little out of place. (Note: The baby in the photo is not on the WFGR staff)


Rick: You are originally from Chicago. Who were some of your radio heroes when you were growing up?

Len: Most of the ones I got to work with! I grew up within a short distance of the WLS tower in Tinley Park, and could listen over the telephone some days. I was one of those who had the radio under the pillow listening to Landecker and Captain Whammo. As I got older, I gained an appreciation for Fred Winston (photo) and Lyle Dean, as well as Steve and Garry. I wore a S&G t-shirt on picture day my sophomore year of high school. Any other Andrew alums out there besides Andrea Darlas?

Once I got on-air, I realized I didn't have the "crazy" gene like a Johnny B had. I took more to the sounds of Bob Stroud, Bobby Skafish, and Scott Dirks on the Loop instead, trying to picture myself in that lineup.

Rick: You're the morning man now in addition to being the program director. In your nearly twenty years in radio as a host and a programmer, you've probably met some of your heroes. Are there any that stand out to you? 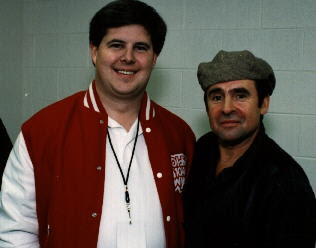 Len: Huh. Twenty years. Where the hell did THAT go?

Most of that time I've been in Oldies, so those are most of the acts that I have met. Guys like Freddy Cannon, Peter Noone, and Bobby Vee are among the nicest guys you'd ever meet - it's as if they actually appreciate still having the ability to play after all this time. Frankie Avalon and Dick Clark were very nice as well. The Monkees were nice if you kept them separate. (photo: Len & Davy Jones)

On the rock side - Billy Squier and Aldo Nova were very cordial. And the guys from Great White were very low-key; this was years before the club fire.

Most interesting? Jim Bolger, the Prime Minister of New Zealand. He had just returned from a trip to Chicago and gushed about Richie Daley, hot dogs, and the Blackhawks game he attended. We got along well.

Rick: I know you're a die-hard White Sox fan. You once told me that you come from a Cubs family too. I'm guessing that you've heard from your family this season.

Len: Of course! I heard from them in 2005 trying to "downplay" the World's Championship. One of these days, I'll be able to return the favor - maybe. (As for me - I'm becoming a more rabid West Michigan Whitecaps fan... back-to-back Midwest League champions!)
Posted by Rick Kaempfer at 12:03 AM