Ian Punnett is the host of Coast to Coast AM on WLS Radio in Chicago, and "The Ian & Margery Show" in St. Paul/Minneapolis. In the early-to-mid 90s he was a talk show host at WGN Radio.


Rick: I knew you in college at the University of Illinois, but you were already a professional radio guy. How did you get started in the radio business?

Ian: I started at New Trier High School WNTH (88.1) The Big Noise from Winnetka! 3 of my 4 high school years I did a show there, and was the host of the big Saturday night show. I went to Lake Forest College for my first few years of college, and the whole time I was there I was also working in radio to help pay the bills. At first I worked at WVVX-Highland Park. That was a wild time, because that station was so strange. Half the airtime was brokered, so you'd hear two hours of oldies, then Indian music…then German polkas with Renate Schuler speaking in German…and then me.

After VVX, I went to WXLC in Waukegan, and then after my scholarship money ran out, I transferred down to U of I, and took a job at WLRW in Champaign. I was using the radio to pay for college, but after I graduated, I decided to stay in the business.

Rick: You grew up in the Chicago area. Who were some of your big radio influences?

Ian: John Landecker! (photo) Loved John Landecker alllll the way home. When I was in high school I was more into the FM scene, and I loved this overnight guy named Peter B. Collins on WLS-FM. He was totally cool. He did this overnight talk show. He was the first guy I heard who used bumper music to come back into a talk show…that was so wild to me at the time. I still remember the time he played the Spirit song "Nature's Way" to bumper into a discussion of teen pregnancy. I was so impressed.

But when I decided to go into radio, that's when I really began to study John Landecker. He was my music radio idol. I listened to every single break and studied how he did it. I also listened to Dahl, and Wally Phillips, but Landecker was the guy for me.

Rick: You came to WGN in the early 90s after doing some pretty edgy shows in the Quad Cities, and Nashville. Do you think that WGN just wasn't ready for your kind of show then?

Ian: I guess it wasn't. In the Quad Cities and Nashville, those were really hard-rock radio stations, even though I was doing a personality/talk radio show that just happened to play hard-rock records. I think when I came to WGN it was a culture shock for both of us. The problem with WGN was the culture kept changing at the top, philosophically-speaking, and it was hard for me to keep up with it. I was kind of like a sacrificial lamb for the inevitable change there.

I stayed in touch with some of the managers after I left, and they told me I became like this measuring stick for the listeners. Every time they brought in someone new they'd hear things like "this new person you have stinks as bad as that Ian Punnett" or they'd hear "If you're gonna change and go this route, why didn't you stick with the guy who was doing it right?" I was the scapegoat of change.

Ian: (Laughs). Since I have a masters degree and I'm studying for a PHD, maybe I'll come back to do Milt's show when he retires.

Rick: What are some of your fondest memories from those WGN days?

Ian: I loved working with Roy Leonard and Milt Rosenberg (photo) and I learned a lot about radio by listening to the other personalities like Kathy & Judy—who were really doing some great things. Overall, it was a great experience, but it's funny, when I talk to people now who say "I used to listen to you on WGN," I think "Oh yeah, that's right, I worked there, didn't I?" I've almost forgotten about it.

Rick: You're doing a morning show in St. Paul/Minneapolis now. How do you like it there?

Ian: I really like it. St. Paul is like an old school town—much like Chicago, and then Minneapolis is more cosmopolitan. It's fun to be a part of both of them. I love St. Paul, which is where we live. St. Paul is the opposite of a transient city where people come and go. People that live here have been here for generations. There isn't a lot of turnover on the radio dial either, which means it's tough to break in something new.

FM 107.1 (WFMP) is a new radio station with a brand new format, so it's nice that people are accepting us. We're an FM talk station which is geared toward women, but it's not one of those silly gossipy radio stations without substance. It's a serious station, that also has fun and looks at the world through the view of women.

Rick: And your wife Margery is the co-host, isn't she?


Rick: What's it like to work with your wife every day?

Ian: It's tricky to be wrong all the time…at home and at work. She has a studio in the house, and does her part of the show from there. She actually leaves the show every morning for about twenty minutes to drive the boys to the bus-stop. When we first started the show it was called "A Balanced Breakfast with Ian and Margery" and we decided it wasn't enough to say it, we had to live it too. We don't call it that anymore, but we still live it. It really is great having that balance. Both of us get to spend a lot of time with the boys, and that means everything to us.

Rick: You're also doing the show Coast to Coast AM, which was created by Art Bell. How would you describe that show to the uninitiated? 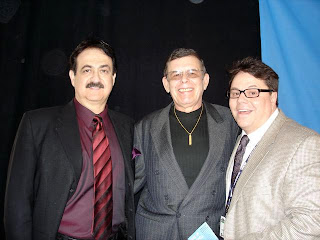 Ian: It airs on Saturday nights from midnight to 4 a.m (on WLS in Chicago), and I also fill in pretty often for George Noory. (Photo: George Noory, show creator Art Bell, and Ian) It's a show that explores alternative philosophies and medicine and really alternative anything, including the paranormal. I really enjoy it. It's a good fit for me. It makes me appreciate different perspectives. Oftentimes, I talk to people without knowing whether or not they are right or wrong, and it forces me to listen with an open mind.

Rick: You have a Masters of Divinity, and you're in the ordination process in the Episcopal Church.

Ian: Yes, that's true. I'll be ordained a deacon in the Episcopal Church in the spring of '08.

Rick: How does your faith influence your radio career, and vice versa?

Ian: My divinity education actually dovetails very nicely with my radio work on Coast to Coast because it's all about spirituality, and on Coast to Coast we do a lot of talking about alternative religions. But my religious training has also helped me become a better listener, and that has helped me in all of my radio work. Being a good listener is one of the most important skills a talk show host has to develop.

Rick: So do you ever hear from your old Chicago radio buddies?

Ian: Yes, I do, and I love it when they check in. I just talked to (WCKG Producer) Dan Falato the other day and caught up with him. I also talk to my buddy Joe Bartosch (photo), who I've known ever since my Waukegan days. I love hearing from my friends in Chicago. When the Bears beat the Packers a few weeks ago it was one of the best days of the year for me.
Posted by Rick Kaempfer at 12:03 AM