When I interviewed Julian in 2008, he was doing the night slot at B-96. A few months later Eddie & Jobo were fired, and Julian suddenly found himself co-hosting the morning show with JNiice...

Julian: Well, with the move to Mornings lets just say my RESPECT level has risen to the Nth degree to anyone who performs this daypart! It's definitely exciting to be able to express one's personality a bit more opposed to over a song intro BUT I won't BS ya and say its been a walk in the park.

With that said, I wouldn't trade this for anything in the world right now. I love the battle and have always been a soldier in the trenches. When you've worked solo your entire career and now involved in a multi-person situation there is a definite learning curve in regard to "thought process", character building, and just getting things fluid...so its just a matter of time when things come full circle.

Its the biggest challenge in my life right now and I'm learning about myself more and more everyday. I continue to strive to work the hardest possible and appreciate anyone who is willing to listen.


Rick: You're going on 3 years now at B-96, and your show has been recognized with awards (Silver Dome), but a lot of people may not be familiar with it yet. How would you describe your show to the uninitiated?

Julian: Well, for the radio "heads" I'd describe it as an executed "1 Man Morning Show At Night". It's organized content formatted in an unpredictable fashion. It's a very well balanced show with content that targets the younger end at night obviously, BUT not so juvenile all the time where it entertains the 20-something demo as well. If there are so called rules, (which there are in "PD World"), such as not talking out of stopsets, not stopping down in a sweep, not airing questionable content, for the most part I have done it. It's about engaging your audience. You do that and time becomes secondary. A listener does not think like we do, with all our "radio theories all wrapped up in it". (Photo: Julian and Rihanna)

Rick: Before you came to town you had a very popular show at WIHT in D.C, which is your home town. Can you tell us a few of your pre-Chicago career highlights?

Julian: I always say doing a service for your community is one of the most beneficial things you can do as a human being. I have assisted in raising over $30,000 for the fight against cystic fibrosis. There were also some silly things, like trying out for American Idol and being compared to a "William Hung" imitation, then forgetting all the words! Actually, it was more fun hanging out with our audience, waiting in line for over 2 days for American Idol, feeling the pulse of what was going on, and relaying it back to the station. I'll also never forget when I got "served papers"...which we won't get into (laughs). A highlight? Definitely not, but a lesson in being smart.

Rick: Being a night-time jock is a different animal than doing a daytime show. Talk about the differences as you see them, and how your time-slot affects what you do on the show.

Julian: Evenings is definitely a different world in that what you may want to do on the air, sometimes you just can't, simply because of the average audience demo at night, and their listening pattern. For example, I probably wouldn't discuss the McCain-Obama race for the presidency simply because most of the audience at night just will not care nor find it relevant in "their world". It's younger-based at night, so we need to be smart about that. In the morning, even afternoons, I'd talk about that, hell yeah. Let's not dumb down our audience. In the evening, you can get away with the more "juvenile" content so to speak, BUT you want to balance that so you hit all ends of the spectrum with your audience so they do not stereotype you as a one trick pony.

Evenings, the attention span is less as well, so I just don't have the freedom to talk as much as I'd like, but if something is compelling time becomes secondary. In AM drive you have more of an opportunity with people paying more attention (you're in your car stuck in traffic, etc) but then again, if they don't find what your doing interesting, just like anything else, they'll flip. Overall, in my daypart we just need to be smart with content that our demo cares about, and execute where we get the point across. We're dealing with active audiences here.

Rick: What was it about the B-96 gig that made you jump at the chance?

Julian: The opportunity to be heard in a market twice the size of where I came from. The fact that I wanted to challenge myself. I knew we had direct competition in many ways and I love that. I have been wanting to move my career forward, and I had been staying in contact with Erik Bradley (photo) and Todd Cavanaugh for a couple years before I arrived, and they have always been the consummate professionals whenever we communicated. To this day they are true, and from my experience, great managers and people of life!

Rick: You may have discovered that Chicago is a very provincial market. Chicago listeners have always taken awhile to warm up to "outsiders." Have you found that to be true for you, and if so, what are you doing to overcome that, and if not, why do you think you've managed to make a connection?

Julian: I was told that when I moved here, and honestly even in DC I kind of had to get over the "warm-up period", even being a local boy. I'm used to it honestly. It did not concern me in anyway. I knew if I made people laugh and entertained them, the fact that I was a "transplant" would become secondary. I would say that's the connection, not to mention I hustle my ass on the streets to meet people from all walks of life, in order to introduce myself and shake their hand.

Rick: You've obviously had a chance to listen around the dial since you came to town. Who are some of the radio talents in Chicago that you admire?

Julian: I actually do not listen as much as I should. I respect the Manno brothers on Q101. They are natural, real, and tapped into their audience. Their vibe, and chemistry isn't forced, it just flows. I listen here and there to Steve Dahl (photo) when I am up that early. One can definitely learn from legends who made the crossover from Top 40 to Talk, and persevered for this long in one town. I enjoy Tony Scufield as well on WGCI. He is intelligent, local, and straight up funny and has that quick-wit.

Rick: Some radio stations have a lot of interaction between the shows, whereas others are less so. How would you describe your relationships with the other shows at B-96? 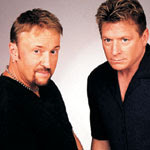 Julian: We all are cool with each other for sure! Eddie, Jobo, and Erica are cool cats! Some AM shows have an expected ego but none here! For who Eddie & Jobo (photo) are, they are the nicest, most down to earth guys you could ever come across. My boy Jniice just moved here from Miami for midday's, but we previously worked together in DC @ HOT 995 so I've known him for over 6 years now. Stylz and Roman are another set of cool guys where we all get along, no ego's here!

Rick: What are some of your favorite things about living here in Chicago, and what do you miss the most about home?

Julian: I love the diversity! When I say that I mean not just culturally, I mean the food, the things to see visually, the places to shop, everything. I love the fact I am inside 7 minutes from work, but I hate the cost of ren that comes along with that (laughs). Chicago has some of the best people I have ever met. Characters, as I would say (laughs). People with passion for their city and their beliefs. As far as my hometown, definitely missing my friends I have known a good portion of my life. The audience, and friends I built over the course of close to 4 years. I miss being able to be in the suburbs and than the city inside 10 minutes. Miss the lower gas prices and tax rate for sure (laughs).

Rick: How have the ratings been so far? 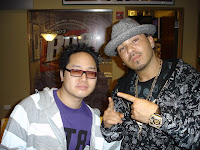 
Rick: So tell us about this concept for a CD you have been working on here locally... 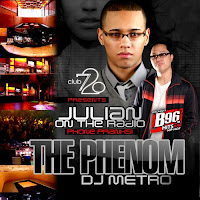 Julian: I have been marketing a new collaboration CD with a local DJ here in Chicago "DJ Metro". Its the best radio segments from my radio show produced with a mix tape featuring the hit music our audience would want to hear.

Recently, we just had a club in town pick up my "idea" and hired us to make them their own CD for marketing purposes. I had imaging done by my guy who is the head of Imaging for Hot 99.5, DC to make this sound top notch. I can do this for any promoter, club, and organization as well. I just did a graduation for WildWood Junior School and when the kids heard the introduction and me talking about them over the intercom...their reaction priceless. We produced a custom CD for their graduation.

Rick: What are your long-term plans in radio?

Julian: I go back and forth with this. I would love to be a manager in Programming just because I have definite beliefs in how I would want my radio station to sound and how I would operate it. BUT, I also want to get into a bigger daypart (AM Drive) to further challenge myself. I believe the spoken word will become even more important, and this is the challenge if you can win people over with YOU. Other dayparts to be blunt, we hide behind the music. Yes, a jock can move the ratings needle, but substantially speaking, AM drive is where it's at.

On a sidenote, I'd like to ask managers in positions of power to take chances on people sometimes. Just because one does not know how to use Selector for example...does not mean they should be written off. If the drive and passion is there, that's #1. These days, its just extremely difficult to learn these tools where people are wearing so many hats. Involve your staff if they want to learn what you do, they can help you. How else will we grow the next generation?
Posted by Rick Kaempfer at 12:02 AM