Byrd is the night jock (weeknights 7pm-Midnight) at the Loop, WLUP FM 97.9.

Byrd: I got my first on-air gig at a tiny station near International Falls, MN when I was 15 years old. Almost 30 years later, I find myself fortunate enough to be at the legendary Loop (97.9 WLUP-FM) here in Chicago. Some notable stops along the way include mornings at KSHE St. Louis, 98 Rock Baltimore/Washington, D.C., and KOMP Las Vegas; nights at Q107 Toronto and afternoons at 97 Rock Winnipeg. All totaled up, 15 years of mornings and the other half doing various other shifts.

Rick: Just looking at the list of cities and the stations you've worked at is pretty impressive--but you've been at the Loop now for over three years. Do you see Chicago as your final destination or are you just a wandering man?

Byrd: Actually, it will be four years in a few weeks! Time sure flies when you're having fun. As a kid, I grew up listening to the great radio in Chicago, dreaming that I might someday get the opportunity to work here. Chicago has the most intelligent and loyal radio audiences anywhere... and therefore the best radio in my opinion. People here are very appreciative and supportive of radio as an art form. So to answer your question, I am where I have always hoped and aspired to be... in Chicago and at the Loop, no less! I don't want to be anywhere else, so I would like to stay as long as the fine citizens of Chicago will have me.

Rick: You're the night guy now, but they've moved you around a little bit as far as day-parts, and you even did the morning show for awhile there between the Morning Loop Guys departure and the arrival of Johnny B. You seem more like a night owl than an early riser to me. Am I right about that? And what are the pros and cons of each shift?

Rick: You are quite an accomplished interviewer, especially when it comes to rock and rollers. Some great ones can be downloaded from the Loop's website, including interviews with the likes of Eddie Vedder, Roger Waters, and Sammy Hagar. Are there any that you've enjoyed more than the others? 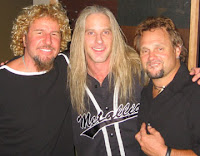 Byrd: Thank you Rick, that's very kind of you. Having Robert Plant tell me how much he enjoyed our conversation, and having Paul McCartney spontaneously sing for me stand out in my memory. Also having former President Clinton, Heather Locklear, Sam Kinison and Nia Vardalos tell me they were fans of the show sure felt nice. Sharing some laughs and conversation with people like Pam Anderson, Jay Leno, Ed Asner, George Foreman, Patrick Stewart, Tony Randall, Dan Aykroyd, Ed Norton, Peter Jennings, Janet Reno, Johnny Unitas, Timothy Leary, Bob Denver, Joey Slotnick, Gary Burghoff and Jon Stewart stand out in my memory as well. There have been many other highlights, too. Chatting with and getting to know members of the Rolling Stones, Rush, Guns n' Roses, The Who, Metallica, Pink Floyd, Aerosmith, Stone Temple Pilots, Black Sabbath, The Doors, Van Halen (photo: Byrd with Sammy Hagar and Michael Anthony), Led Zeppelin, Motley Crue, Pearl Jam, The Beatles, AC/DC, Styx and well, you get the picture. Some very talented, wonderful and fascinating people.

Rick: Are there any that were painful experiences for whatever reason? 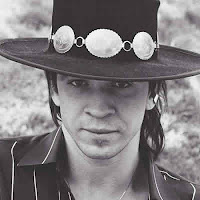 Byrd: The most "challenging" interview I ever conducted was with the late Stevie Ray Vaughn (photo). At the time (1984), Stevie was still imbibing quite a bit. He came in pretty sloshed and was nodding his head "yes" or "no" to all of the questions. I had to stop the tape and explain as gently as I could that this was an interview for radio and the audience wouldn't be able to hear him shake his head. We resumed, he tried to speak a little, but it wasn't the most usable piece I've ever done. Suffice to say that very little made it on the air, but I wish I still had that tape. I'm pretty good at saving and cataloging most every interview I do, but somehow that one got lost along the way. Having Ace Frehley of KISS pass out on the phone (you could even hear the body drop) while we were on the air qualifies as the most bizarre. All in all though, the listeners are still the ones I have the most fun talking to. They have the wildest stories and funniest things to say of anyone, hands down!

Rick: When I'm in the car at night time I will punch in the Loop because I really like those features you do at 10:00 every night. Tell us a little bit about those features, and how they came to be.

Byrd: Monday's at 10pm, it's "The Loop Thinks Pink", an hour of Pink Floyd with deep cuts, live tracks and rarities along with the latest Floyd news. This one actually was in existence already before I came aboard at the Loop. I've attempted to add to an already great concept. Kick back with the black light, the Doritos and the bean-bag chair.

Tuesday's at 10pm is the "10 0'Clock News." Every week I play the latest offerings from heritage Loop artists along with some new "baby" bands we think you might like. A sense of discovering something before anyone else is fun.

Wednesday's at 10pm it's "High Voltage." As the name might indicate, it's a segment devoted to bands and songs that are a little "harder, louder and faster" like Iron Maiden, Judas Priest, Metallica, Black Sabbath, Motorhead, Pantera, etc. "It goes to 11!"

Thursday's at 10pm it's "3-Some Thursday." Three songs with a theme, from the same artist, etc. The audience comes up with some killer ideas and concepts.

Friday's at 10pm is "The Loop On-Stage", a virtual concert with some of the biggest names in rock, complete with "stage announcements" from me. Love that echo chamber and the girls in the front row! (laughing)

And finally, every night at 11pm, it's the "11 O'Clock Shocker." I dig deep into the music library for a song that perhaps you've forgotten about, or maybe a song you've missed along the way, but always a great song. The "Oh WOW!!!" factor. The listeners suggest some great ones here, too.

Rick: Why do you think that you're given so much more freedom than the other rock jocks on the Loop, or is that just a misconception?


Rick: When we were both working at the Loop your mail-slot was right next to mine. Suffice it to say, "Byrd" isn't a play on your real first name or your real last name, so here's a question I'm sure you're asked all the time: Where did the name "Byrd" come from? 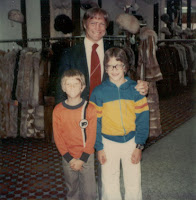 Byrd: It was a nickname I somehow acquired in grade school (Photo: Byrd as a young lad and his little brother with Bobby Hull.) I'm not sure why (perhaps because I'm thin?), but it stuck and I thought it would be easier for people to remember, so I carried it over. Byrd it became, then.

Rick: Tell us something about yourself that would really surprise your listeners.

Byrd: I enjoy a good cup of tea (Bill Klaproth, our assistant PD/music director finds this endlessly amusing), and I had designs on becoming a genetic biologist before radio's theater of the mind and rock 'n' roll stole my soul. And that was the end of that!
Posted by Rick Kaempfer at 12:09 AM