Jill Urchak is a long-time traffic reporter in Chicago, most recently heard on WLS AM & FM.


Rick: I read your blog post on Chicago Now, and it sounded like you were shocked when WLS laid you off a few weeks ago. Would that be an accurate assessment?

Jill: Exactly. That is accurate. I wasn’t so surprised by the AM, but the FM was surprising. That was where I started with them, the FM. I stood there like a deer in the headlights when they told me they wanted Christina (Filiaggi) to do both stations on-site, and I was out.

Rick: So you were never there at the WLS studio?

Jill: No. I was never on site there, which was unfortunate. I was back at Clear Channel traffic.

Rick: I know you were only on his show for a few months, but what was that Roe Conn experience like?

Jill: Well, you know what, between that, and the FM, and the I heart radio reports (for the iPhone), it was intense. It was non-stop during that shift. They were never exactly on time on the AM, so that made it hard to juggle everything. I had to record my FM reports to accommodate them, which took away my live chats with Greg Brown, which was unfortunate, because I always enjoyed being on with him. I enjoyed being on Roe’s show too, but with everything going on, it was all strictly business.

Rick: Please forgive my ignorance, but I just don’t quite understand how these things work with the traffic service and the stations. So you weren’t a WLS employee, you worked for Clear Channel Traffic, right? So who makes the calls about the traffic assignments? Does the station have control? Does Clear Channel? I know I’m not the only one that gets confused by this. Could you talk me through that maze?

Jill: (laughs) I’m not sure I understand it that well either. I’d say it’s a combination of who makes the call between the station and Clear Channel.

I can tell you how it worked with WLS. It was their call for Clear Channel to hire me. The timing worked out great because I had just been laid off at Shadow Traffic. I happened to be known by the program director, and WLS had just switched from Shadow to Clear Channel, so it worked out perfectly. Usually the station requests someone, and Clear Channel does the best they can to provide the person the station requests, but sometimes they say, here, try him or her out. That happens more to the smaller stations.

Does that answer your question at all? Let’s just say there isn’t one clear way it happens every time. It depends on the station, and the person, and the situation.

Rick: (laughs) Exactly. You’ve been doing it now for more than a decade, and I’m sure you’ve picked up a few things along the way from some of your colleagues. Who do you look up to in the traffic world—who are the ones that are considered the best of the best by the people that do it every day?

Jill: Oh wow, hmm. That’s such a funny question. Well, the first one that comes to mind for me is Marti Jones (photo). I’m not just saying that because she’s my friend. I really admire her abilities. That’s one person that I’ve always thought of in that way. I feel terrible that more names aren’t coming to me right away, but you have to remember--we may all be in there together, but we also don’t get to hear the other people on the air that much. We’re on at the same time on different stations. I know this is going to sound a little generic or lame, but I really do admire everyone that does it, because it’s not easy to do.

Rick: A few years ago they put out calendars featuring traffic reporters as a charity fundraiser for Breast Cancer Research and the Make a Wish Foundation. Was that a fun experience?

Jill: It was supposed to be fun and it was fun, but some people thought it was tacky, which left a sour taste for some people. I always thought it was fun. I sure had fun doing it. We weren’t thinking we were posing for Playboy. We never claimed to be runway models or anything. We just did it for fun for two years, and it was for a good cause.

Rick: I’ve heard you on many stations over the years including BBM, the Loop, and the Score just to name a few. You’ve had a chance to work with some of the legends in the business. Some are more likely to engage you in conversation on the air than others. Who are some of the personalities over the years that have brought you into the show mix and let you do more than the traffic?

Jill: The first person that did that was Red Muldoon, who later became my husband, though we divorced. Red passed away not too long ago. But I was doing traffic with him on the Rabbit, and he incorporated me into the show, and that’s where I got my first taste of it. The smaller stations like WKRS in Waukegan, were always happy to have us do more. Lenny Palmer at WKRS was a huge one for me. Eddie Webb, on the Loop, was another one. We had a chance to do some bantering. 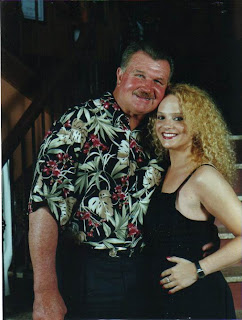 But the biggest one of all had to be the Score. Doug Buffone and Dan Jiggetts made me a part of their show. I always loved those guys. Dan McNeil and I had a love/hate relationship, and that made for a good time. In fact, that’s where it started there, with McNeil and Boers. Terry Boers in the afternoon really used me, and gave me every chance and opportunity to spit on the Cubs (laughs). In fact, because of that, Ron Gleason the PD even let me guest host overnights a few times. That scared me a little bit, but he knew my feisty personality about the Sox, and I really do love baseball and follow it. The Score is definitely where I got to show my personality. (Photo: Jill with Mike Ditka)

Rick: You’ve also done a little television and DJ work, in addition to your long traffic career. Obviously there are a few different possible directions to go from here. What is the path you’re thinking of following?

Jill: All of them. Any of them. I feel like this is a turning point for me. It’s obviously not a decision I made on my own, but I’m open to many possibilities, and any possibilities. I just know I have to be doing something creative.

Rick: You’re more than just a casual writer too. You’re a published poet, and I understand you’re working on a couple of books. Are you willing to share any information about those projects?


Jill: I’ve written a children’s book called “Larry the Fish,” which is about a Beta fish named Larry that I had for four years. The other one is supposed to be funny—it’s a humor book. It’s called “Women Period,” and it’s written like a Dr. Seuss book. It goes through the 28 days of a woman, and I have fun with the concept. One day we’re on top of the world and one day we want to rip your head off. That’s who we are.

Rick: So all of your stuff is poetry, in a way.

Jill: Yes, that’s true. I went through a bad breakup years ago, and that’s why I started writing poetry. And I wrote the poetry on poetry.com, which led to my poems being published in four different books. It was really written for myself—a chance to vent, to get rid of the passion I had in me. I was just very hurt, and writing helped me. Looking back on it, you’ll probably think I’m some sort of a psycho, but I really was just venting. It was raw emotion. (Laughs)

Rick: I know you’re a Chicago girl, born and bred on the South Side. Were you a radio fan growing up, and if so, who did you listen to?

Jill: Oh yeah. I loved WLS. It wasn’t even who was on, it was what. It was the music of WLS. I loved all those old school WLS guys like Larry Lujack (photo), but the thing that hooked me was the music. That was before music was divided up into all these formats. You had rock and country and soul and it was all mixed together. I loved all that mix of music together.

Rick: It must have been a big thrill that you ended up on that station.

Jill: Oh yeah. It was a big thrill being on WLS the first time. A dream come true.

I was born in 1971, a little fetus listening to the transistor radio; my mom always had it on. So, my love of radio started with the music, but at some point it turned into the presentation. I was that girl with the hairbrush pretending to be on the air. I thought, you know what, I want to do this. I’ve always known I was going to do radio, and people thought I was crazy. I wanted to be the person behind the microphone.

Rick: Thanks again for doing this. I should warn you that I’m a Cubs fan. You’re not going to spit on me are you?

Jill: No, no. As long you don’t say ‘Oh I’m sorry’ when you hear I’m a Sox fan. I can get along with you unless you say that. When those words are spoken, the gloves come off (laughs).

Rick: So, is this the year for the Sox?

Jill: Why not? You know what, I feel good about this year. I’m going to sound like my father, who is an umpire by the way, but I have good feeling about it. I would tell you if I thought they were going to stink. I think they’ll be good. We won’t have to wait another 50 or 75 years for another World Series.
Posted by Rick Kaempfer at 11:08 AM