Mike Tomano & Steve Touhy are the morning co-hosts of the Tomano & Touhy show on WKAN. This week they begin simulcasting their show on WYKT.


Rick: I understand tomorrow (July 7) is a big day for the Tomano & Touhy show. Why don't you tell everyone what is happening.

Tomano: The Tomano & Touhy Show will be simulcast on WKAN in Kankakee and MY 105.5 in Will County. MY 105.5 is the station and frequency where Steve and I started our show together back in 1996 when it was The KAT, the legendary and last of the free-format FM rockers.

Rick: Before we get into the very odd history of your partnership, could you describe your show to people who might not have heard it before?

Tomano: We consider ourselves entertainers first, and we’ve honed our skills toward that end. The show is funny and unpredictable. Steve and I have worked very hard to develop a show that transcends boundaries of formats and demographics. It’s an energetic mix of lifestyle, news, pop culture and entertainment topics that get our special treatment.

Touhy: We have fun all day long. For 3 hours a day we’re allowed to have microphones in front of us and we hope that the people listening have as much fun as we do.

Rick: OK, now let's get into this history of your partnership. I've been following your careers for the past few years and the twists and turns have been enough to require Dramamine. Hirings, firings, together, apart, together again. I'm not sure where to start, so I guess I'll just start the beginning. How did you meet each other in the first place?

Tomano: I called Steve after we met at a radio station in Elmhurst. I’m not really sure. I knew he was ambitious and we seemed to have the same goals in mind.

Touhy: We were working at separate stations and our interns were dating. Mike called me to do a bit with the intern and asked if I wanted to be his sports guy. I took the job and the chemistry was instant and within a week the show was The Tomano & Touhy Show. We even moved into an apartment together to save cash.

Rick: How many times have you worked together now and at how many different stations?

Tomano: I left Major Networks, voicing satellite Lite Hits to take a job at WYKT. I was Promotions Director and on-air fill-in from September of 1995 until Spring of 1996 when I took over mornings. Steve got fired on the air from that first round. Classic stuff.

Touhy: I had been suspended a few times. I was young, goofy and a bit rebellious. Once I even got fired on the air. It’s one of our favorite sound bytes to play on the air. The owner of the station called the show and simply said, “Steve’s fired! Get him off the air right now.” In our typical fashion back then I think we just laughed.

Tomano: After that, I continued on at WYKT with two new partners until 2002 when I got Steve back. We had a tremendous run for a year.

Touhy: This was when we really hit our stride. I had done some stand – up and we were able to work separately to figure some things out on our own.

Tomano: We were really getting strong as a team when a new General Manager came in with a plan to change format. Steve was out

Tomano: and I gave notice. I bounced around a bit, working at a dead-end situation with a small station way out west when Steve called me and told me that WKAN was switching to Talk. I contacted them and they hired me to do mornings. I did three years with great success.

Touhy: I went out to Ottawa, IL and did mornings on a Hot AC station. It went very well, but when a format change to Lite Hits was in the works I began to look for something else.

Tomano: Eventually, when they (WKAN) were looking to do a local afternoon talk show, I recommended Steve. Eventually, upper management realized that putting us back together was a smart move to make.

Rick: You guys are obviously good friends. I don't know many teams that have actually lived together. Do you think that's the basis of your on-air chemistry, or is it something else? 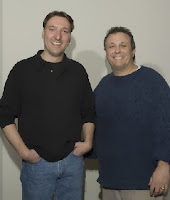 Tomano: Our professional relationship is based on mutual respect. Steve is a tireless worker and a consistent performer. Steve has made me practically pass out from laughing many times. I’m his barometer and he’s mine. We are very hard on ourselves, so we know when we knock the other guy out with something that we are operating at our top level. As for our personal relationship, I think of him as nothing less than a member of my family. He’s my little smart-ass brother.

Touhy: Absolutely. I think it comes across on the air. I don’t know that there are many comedy teams that actually like each other. Mike mentioned the mutual respect. We don’t have any fear of the other guy getting the laugh, as long as we get the laugh. We also don’t worry about petty things like who does what job, who came up with what idea, or gets credit for what. We’ve been through hirings, firings, marriages, divorces, almost marriages, break ups, births, deaths and multiple General Managers. We view our show as something great we do everyday, but we also enjoy our lives as friends too.

Rick: Now you're officially back in the saddle doing mornings together and things are looking up. It must be a challenge to do a morning show outside the Chicago market going up against some of the big guns in town. What are some of the pros and cons of doing a show based in Kankakee?

Tomano: Pros are that we are able to be really big fish in a little pond, which has its rewards. The cons would obviously be money and exposure. Every opportunity is earned.

Tomano: When I was in the sixth grade, I first heard Steve Dahl & Garry Meier doing the Breakfast Club on The Loop, and it was an epiphany. From that point on, there was never any doubt as to what I wanted to do with my life. Dahl definitely shaped my creative sensibilities a great deal. I also enjoyed Fred Winston and Robert Murphy a lot. I was hooked on Roy Leonard, too. His interviews were great. My favorite music jocks were the hosts at WXRT in the 80s. I would listen to Bobby Skafish and Johnny Mars and knew what they were doing was a special kind of radio. When Bob Lassiter came to WLS, I listened every afternoon. His wore his heart, and his demons, on his sleeve. Great stuff.

Touhy: No doubt, Steve and Garry have influenced us both big time. I always liked listening to Brandmeier. I would listen all day long when the Loop was talk and I just loved it. I’m not just saying this because it’s your interview, but when I was an intern for John Landecker (photo), you were both huge influences. I would just watch him work and see that just because you can’t see a person on the radio doesn’t mean you can’t be animated. From you I learned a tremendous amount about how to put a show together and produce a good show. Working in smaller markets we’ve always been our own producers.

Rick: You've also had some experience doing stand up comedy and various other stage acts (including having a band). How has that experience affected your radio show?

Tomano: Ultimately, live comedy and music shows are an additional forum for us, but there’s also the uncensored and uninhibited aspect to live performance that enhances the experience. I love it all, but it’s nice to have that daily radio anchor for the act.

Touhy: For me it gave me much more confidence in my humor. On stage I got that immediate feedback and could tell what worked and what didn’t.

Rick: If you had to pinpoint one or two moments from your radio career that you're most proud of, what would it be?

Tomano: It’s difficult to pinpoint. I hear from people everyday that listen to us and are touched by what we do on the show. Knowing that the work you do makes a difference in someone’s life is extremely rewarding.

Touhy: One moment would have to be the day I bought my house. It was the first time I realized I was actually making a living doing what I love. The other would be recently when we were told that we going to start simulcasting. Mike and I have been working a long time toward this and it felt great. I can’t wait until tomorrow, I think it will be another.

Rick: Where you see the Tomano & Touhy show going from here?

Tomano: I see us continuing to add stations. Our show is a turnkey operation for stations. We have an incredibly insightful manager, Mike Moyers, who is behind our efforts one hundred percent. As performers, Steve and I never stop growing, so I’m looking forward to the future.

Touhy: I agree. I go to work everyday and laugh with my best friend. Wherever we go is cool with me.
Posted by Rick Kaempfer at 8:41 PM