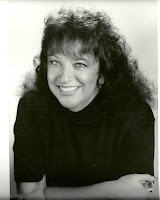 Penny Lane was part of the all-female WSDM-Chicago (97.9 FM) lineup in the 1970s, but has been in the advertising/voice-over world for many years.


Rick: I have very fond memories of listening to WSDM radio in the days before it became the Loop, but I confess that it wasn't for the music. It was for the all-female on-air lineup, including of course, Penny Lane. How did you end up getting the job there?

Penny: I graduated from Goodman Theater School of Drama, which is now the theatre school of DePaul University. I worked in their box office after graduating while looking for work. My boss had WSDM-FM radio on all the time. It was known as "The Station with the Girls and all that Jazz." One day I heard them announce a contest. They were looking for the most creative letter written answering the question: "Why I want to win a week on the air." So I submitted my letter and won. After the week was up, they liked what I did and offered me a regular time slot.

Rick: Last year I interviewed Connie Szerszen, and she told me that each of the girls were asked to come up with an air name. She chose "Dawn" because she was doing mornings. You chose "Penny Lane" because...

Penny: Our program director, Burt Burdeen, who had an incredible ear for choosing music and comedy bits for the station,asked me what name I wanted. I hadnt given it much thought and the next track that played on the air was, "Penny Lane". He said, "Why dont you use that?" It has been a great name for me because everyone remembers it because of the Beatles tune.

Rick: What are some of your favorite memories from those days?

Penny: The creative spots and promos the station wrote. I loved performing them! The parties for launching new artists and records. So much fun. Being the first to play a new record and playing so many new releases when they first came out, before anyone else. I liked hearing from listeners who enjoyed my work as well as the station. It was, as they say, all good!

The perks: Being invited to The Playboy Mansion and Bill Cosby opening the door to greet the guests! Being able to ask listeners to send in money to buy recording equipment for the handicapped children at Children's Memorial Hospital in the name of Jim Croce (the recording star, who had recently been killed in a plane crash). I knew Jim. A very close friend of mine who was also a radio personality, Morgan Tell, introduced us. Morgan became his road manager and was killed with him in that crash. I wanted something good to come out of this sad event. We raised enough money to put 3 players and audio systems in the hospital. 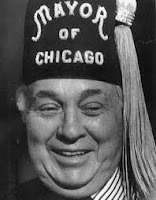 If you want the one memory that was by far the best and most important to me...it was meeting my future husband Wayne Juhlin. He was writing a comedy album on the late Mayor Richard J. Daley (photo). He needed a female on the "CHICAGA" album and since he was also a record promotion man and knew (WSDM PD) Burt, he asked him for a suggestion. Because of my theater background, Burt suggested me. What fun! It also led to me leaving the station and going on to WFYR with Wayne as the morning duo. We also did many commercials and syndicated radio shows first for Dick Orkin ("Chicken Man" and "Tooth Fairy") and then we went out on our own.

Rick: I know the whole idea of the all-female lineup was sort of a take-off on the Playboy Club. You were even called "The Den Pals." But despite that sort of sexist (by today's standards) approach, there really were quite a few very talented radio personalities that worked there. I think people that aren't familiar with that station, might be surprised by some of the names that later went on to become famous. 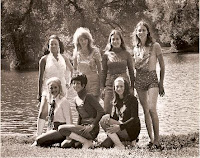 Penny: You are so right! The famous journalist Linda Elerbee. Danae Alexander, who only recently left radio after a long career on the smooth jazz station (WNUA). Mary Dee of WGN-TV. Cindy Morgan who went out to L.A. and did movies like "Caddyshack" and "Tron." Wanda Wells who was on (and may still be on) WFLD TV. You mentioned Connie. There were quite a few but I don't know what happened to them all. (Photo: The Den Pals. Back Row, Yvonne Daniels, Connie Szerszen, Danae Alexander, Jan. Front Row: Cheryl, Penny Lane, Janice)

Rick: I know one of your former colleagues at WSDM was Yvonne Daniels, who died way too young. When the Radio Hall of Fame honored her posthumously a few years ago, several of the former WSDM jocks were there, including you. What was that night like for you?

Penny: Yvonne, who went on to be the first female DJ on a major rock station, and whose father was the great singer, Billy Daniels, was in a class by herself. What a voice, and smooth as can be. Her upbringing and knowledge of music and the performers was amazing. That night, I felt lucky to have worked with her and so happy she was honored!

Rick: As you already mentioned, after your WSDM days you later worked at WFYR with your husband, Wayne Juhlin. What are some of your favorite memories from your stint at WFYR?

Penny: Oooooh gosh! A whole different ball game! We had to do promotion after promotion! We got up at 4 am, were on the air from 6 to 10, then had meetings, and then we were expected to go all over the suburbs and city to do promotions in the afternoon and night! Clubs, clubs and clubs! Going to clients and giving away prizes and emceeing events for them! Crazy promotions, like the station hiding gold bars and giving clues as to where in the city they might be. They had a "FYRE" truck that lugged us all over the city to make appearances at both nightclubs and clients. Once they made Wayne into a human ice cream sundae! We judged "Miss Nude World Contest"...everyone was without clothes...even little kids...a whole way of life I had never been exposed (so to speak!) to.

Sadly, one client was a resort in Lake Geneva. They were hoding a hot air balloon race. We were expected to go up in a balloon, and we decided to go up with a lady who was an experienced balloonist. Because of Wayne's fondness for pinball machines (he saw one in the lobby of the resort and kept playing and winning games), we were late for the event, so they took off without us. 20 minutes later the balloonist hit a wire. The basket turned over and she was killed.

Rick: You've stayed in the business since your on-air days through your company Penway Productions. Tell us a little about the company and some of things you've done.

Penny: After working with Dick Orkin (photo), we fell in love with the art of doing funny commercials. We opened the company in about 1977 and have freelanced for some of the biggest agencies. Our commercials have been heard nationally, and we have won Addys, Clios and Windys. We have written for trade shows and performed for them as well. Wayne still writes commercials and has written and adapted plays in Chicago. I do publicity on a freelance basis and enjoy meeting new people and learning about products, places, and events that need exposure and media placement.

Rick: I know you've been doing this now a lot longer than you ever did radio, but do you ever see a way that radio could lure you back in someday, or is that chapter of your life officially closed in your mind?

Penny: I feel like I'm still on the radio part time because of the commercials. I just recently did a a spot for the National Soybean Association. But to answer your question, if, as so many ex jocks and talk show hosts like to say, it was an interesting offer...sure. I would consider it.
Posted by Rick Kaempfer at 8:16 AM