Java Joel Murphy once manned the night shift at WKSC-Kiss FM in Chicago, and can now be heard on the radio in Cleveland and Montreal (among other cities)


Rick: In Chicago we remember you mostly for your time as the host of "The Rubber Room" at WKSC (which ran from 2001-2005). How would you describe that show to people who never heard it?

Joel: I did the show with J Dogg & Silly Jilly. J Dogg was a production assistant/utility guy who was there when the station was doing Rhythmic Oldies as "The Beat". He was a goofball and we hit it off immediately. He was like a cross between Eddie Haskell and Justin Timberlake. Silly Jilly used to call into the show when it was just me, J Dogg and Erica C. (now of Eddie, Jobo & Erica). Jilly hated me...but wouldn't stop calling into the show. She was 17, I think. Then, she started just showing up at the station. She'd hang out in-studio with our afternoon guy, Rick Party. Slowly but surely, she just kept hanging out. She wouldn't leave! Pretty soon, Jilly and her random sense of humor became a part of the show. We all had pretty similar sensibilities. It took awhile for the show to really gel. It certainly wasn't overnight. 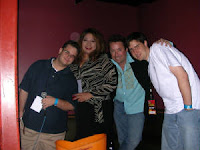 (Photo: Java Joel, Mel T, DreX, and Scott Tyler) Essentially, it was just three friends hanging out goofin' on stuff. At the time, Kiss was an under-performing station going head-to-head with a 20 year behemoth--B96. In order to cut through, I knew we'd have to be pretty aggressive. We did the obligatory prank calls, parody songs, bits & topics. Nothing terribly innovative. Some considered us fairly subversive for a CHR-night show. At our best, I think we were honest, real, self-deprecating and interesting. At our worst, we were sophomoric, sloppy and childish. We prided ourselves on caring more about what came out of the speakers than what kind of clothes we were wearing or what type of hair gel we were using.

It was the single greatest experience of my professional life.

Rick: I remember a memorable interview you did with Justin Timberlake. Would you mind recounting that story for us? 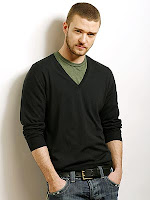 Joel: A few weeks prior, Justin went on Hot 97, the hip-hop station in NY, talking about his sexual exploits. I figured, if he talked openly and honestly about his sex life to them, what would keep him from doing the same with me? (Demographics, apparently) I knew I didn't want to do the standard, conventional pop interview. So, I jotted down some top-of-mind questions--all having to do with his sex life, his drug use etc...Well, he wasn't having any of it. He lost his temper, I lost my temper, we ended up screaming at each other. We were both pretty annoyed and disgusted with each other. He ended up cursing at me and eventually hung up. Some people still think it was just a fixed, wacky radio stunt.

After the interview ended, word is, Justin immediately called his label, Jive Records, to complain. The label freaked out and was acting as if I had just interviewed the Pope. It was really dumb. Jive did everything in their power to try and block the interview from airing. Luckily, my PD Rod Phillips had the courage and foresight to let it air. The next day, the story was all over the web. Even making it into the London Sun and NY Post. I still get asked about it to this day. It was a pretty exciting week.

Some Program Director's actually think I should've gotten fired for that interview. There seems to be this antiquated notion that if you're on a top 40 station and targeting females, you have to play nice and be respectful of "core artists". I don't buy it. I think the preferred end result is interesting radio. It surely wasn't the best thing we did on Kiss, but I do think it was compelling radio.

In retrospect, it was admittedly a pretty obnoxious, amateurish interview. However, I don't regret doing it. I still get asked about it to this day. It gave us the best book up-to-that-date and got the station and show some much needed buzz. I'm glad we did it. I got a pat on the back from John Gehron the next day. I still remember that.

Rick: Of course, The Rubber Room came to a crashing halt one day in 2005 over a remark you made that was considered "racial." Now that you've had some time to reflect on that incident, what are your thoughts?

Joel: I think what was most criminal about that remark was that is just wasn't funny. This isn't a popular opinion, but I do think there is a place for racial humor...provided it's FUNNY. My comment wasn't funny, but it also wasn't hateful.

I think the nail-in-the-coffin for me wasn't the joke itself, but a fight I got into with a woman who called into the show to complain. I riled her up so much that she called management the next day. Had I not gotten into that argument, the comment may have remained under the radar and I probably wouldn't have gotten fired. The bit got a grand total of one complaint.

Rod Phillips, my PD, called my home phone the next day. I knew something was up since Rod never called my home phone. If he needed something, he'd send me an email or try my cell. On my way out the door, I told my wife that I thought I was going to get fired. I was right.

I could tell Rod didn't really want to fire me. It was out of his hands, as they say. On the drive back home to Wheaton, I called J Dogg and Silly Jilly to give them the news--the show's been cancelled, it's over.

It was a difficult time. For the next eighteen months, I was essentially jobless. I was able to grab some part-time stuff at some suburban stations. Eventually, in the spring of '06, my wife and I left Chicago and moved back to upstate NY to live with my Mom. I never thought it would come to that. A few months later Clear Channel hired me back for nights at Kiss in Cleveland. I've been here since.

I've learned quite a bit from the experience. It seems many people are unable to distinguish the difference between hate speech and racial humor. They equate a black joke with a hate crime. People like Al Sharpton and Jesse Jackson are part of the problem, not the solution. They have done nothing to bring people together. They're all about race-baiting and being divisive. The black community deserves better leadership. So many issues need to be addressed. Instead, they go after the Don Imus-es and Opie & Anthony'es of the world. There's something truly perverse and offensive about that. I find that more sickening than any racial joke I've ever heard.

Rick: One of the members of your show, Silly Jilly, is back on the air here in Chicago. Do you keep in touch with her at all?

Joel: Absolutely. Just talked to her last night. She called my hotline here in Cleveland to tell me she had just gotten a request for one of the parody songs we did way back in 2002! She's come a long way since her days of hanging out in our Hancock studios eating cream cheese with a fork and babbling incessantly about ridiculous things. I was still in Chicago when she got an interview with Kiss FM in Harrisburg. She hosted a popular night show there for a couple years. It wasn't long after when they called her back home.

Jilly's (photo) grown into a very dynamic air personality. She's a refreshing change from the norm. So many (male) PD's want their female jocks to giggle a lot, act sexy and talk about Hollywood gossip, shoes, boys and clothes...Jilly is random and real. She has a bright future ahead, just as long as she can stomach all the programming megalomaniacs and industry know-it-alls.

I still keep in touch with J Dogg, as well. He's married, has kids and is making loads of cash in Texas working for an oil company. No, I'm not kidding. You can't write stuff like this folks. ;)

Rick: While you working here at Kiss, you were also voice-tracking nights at eight other Kiss stations. I've talked to a lot of people who have lost their jobs thanks to voicetracking, but not too many who have been the actual voicetrackers. I take it you have a little different view of the practice. Am I right?

Joel: I don't track nearly as much as I used to. I do the very occasional fill-in for my old Chicago PD, Rod Phillips who is now at Y100 in Miami, giving the station their biggest ratings in decades. My friend and former Kiss FM afternoon jock, Scott Tyler, hooked it up so I can track weekends for WOKY, the legendary AM oldies outlet in Milwaukee. I love that gig. It gives me an opportunity to slam posts, run up ramps and lets me live out all my boss jock fantasies. I also do afternoons for 94-7 Hits FM in Montreal. That's cool since I'm from far upstate NY and grew up listening to Montreal radio. It also gives my family a chance to hear what I'm up to.

I'm happy to see more companies move away from tracking. Radio is obviously going through some serious growing pains. I think we can all agree that, now more than ever, being local is extremely important.

Rick: How is your show there similar or different to the show you did in Chicago, and can your Chicago fans listen anywhere on the internet?

Joel: My Mom thinks my show here in Cleveland is boring. She used to listen to the Chicago show on-line. I'm not nearly as fearless as I once was...plus I'm doing the show solo. The show's pulling some really strong numbers and the bosses seem pleased. Yup...All the stations I'm on (Cleveland, Montreal, Milwaukee) can be heard on-line.

Rick: Is there anything you'd like to say to your former Chicago listeners and/or colleagues?