Judd Sirott is part of the Chicago Blackhawks and the Chicago Cubs broadcast teams for WGN Radio.

Rick: I’m talking to you right after a Blackhawks practice, in the midst of a great hot streak. Do you think this Blackhawks team has what it takes to repeat, or at the very least, scare some of the teams that are seeded higher than they are?

Judd: I don’t think there’s any question. All they have to do is get into the playoffs, and after that, all bets are off. Philly is a great example of that. They got in last year as the eighth seed, and took the Blackhawks to six games in the Stanley Cup Finals.

Now let’s look at some of the other teams in the same conference as the Hawks. Even if the Blackhawks fall back a bit, and end up as the #8 seed, and the Canucks are the #1 seed—do they really scare you? Vancouver is a very good team but the Hawks have beaten them in the playoffs the past two years. Whether it’s the Canucks or the Red Wings or anyone else they have to face, there’s not a team they don’t have a chance against. It’s a wide open conference and anybody can win it.

Rick: I know you’re a hockey guy—before the Hawks, you were the play by play guy for the Chicago Wolves for twelve years.

Judd: And I did hockey games for HD Net for two years. I left the Wolves after 2006 and broadcast hockey games for Mark Cuban’s network. It was a terrific gig. Every week we would broadcast the best team, the best game we could get. It was fabulous and it was a great package. Unfortunately, Cuban opted not to renew with the NHL—he shifted his direction. I loved working there, but when the network didn’t renew, I was fortunate enough to land with the Hawks on WGN. I had actually gotten wind of Mark not renewing before it was officially announced, so I had called Dave Eanet, and told him I would be available. He called back and we managed to find a fit.

Rick: Before the last couple of years, when the Blackhawks were, let’s be nice about it, underperforming, a lot of people were saying Chicago isn’t a hockey town. That must have frustrated you. I mean, here you were, doing the games for a minor league team that was drawing almost as many fans as the NHL team. If that’s not a hockey town, what is?

Judd: I think there were about two million fans at the rally downtown that would disagree about Chicago not being a hockey town.

And you’re right, the Wolves were a tremendous success during the down years for the Blackhawks, and they still are. That started with the ownership. The Wolves ownership didn’t run it like a minor league team. They ran it to be the best possible franchise it could be. The Blackhawks have that now with Rocky Wirtz and John McDonough. When ownership commits to the product it makes all the difference in the world.

Rick: I’m sure you grew up a Hawks fan in Arlington Heights. What does it mean to you to be a part of this Blackhawks experience; hosting the pre and post-game shows? 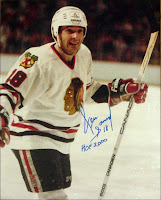 I always loved listening to Pat Foley on the radio too going all the way back to his time on WIND. He had that phenomenal voice. When I listened to him I thought—I want to do this. Ken Wilson was good too, and he was doing them on TV at the time, but I always preferred listening to Pat on the radio. It’s hard to put into words how much of a thrill it is to be doing what I’m doing now, not only with the Hawks, but also with the Cubs.

Rick: How do they work that with you when the Hawks and the Cubs are both playing? Does one team take precedence over the other?

Judd: If there’s a conflict, the Cubs take precedence.

Rick: Even during the playoffs?

Judd: Well, there usually aren’t too many conflicts. Last year during the playoffs, I would do both. Say, if the Cubs were on during the day and the Hawks at night, I could do both, and I did several times.  But if the schedules conflicted, and both games were on at the same time, or I was out on the road with the Cubs, the Cubs took precedence. I’m guessing it will be the same way this year.

Rick: I interviewed your uncle (Bob Sirott) for Shore Magazine a few years ago and asked him if he could be doing any other job in the world, what would it be? He said it would be your job. As far as he’s concerned, you have the dream job with the Cubs.

Judd: (laughs) Yeah, I’ve heard him say that. It’s a great gig. No question. It’s a phenomenal gig. Granted the team hasn’t had the success, but this is still an incredible privilege. To work with Pat and Ron the past few years was incredible. To be able to do play by play for the Cubs—c’mon, that’s beyond my wildest dreams. If somebody told me a few years ago that I’d be able to work for both of these franchises doing what I’m doing now, I  never would have believed it.

Rick: I love listening to Cubs games on the radio. I’ve always wondered about the job that you have—namely that one inning during the game that you get to do play by play. That must be rough to get a flow going.

Judd: I think you figure out a way to jump right in. With Ronnie in the past, it was a treat. He was so much fun to work with. It’s really just a matter of being a conduit to the game. Do it accurately, descriptively, and provide some banter. Every game is different. I used to joke that nobody could call three up and three down like me, but then all of a sudden it would go the other way, with an eight run inning and three pitching changes. I think the key is that I always prepare myself as if I am doing the entire game. 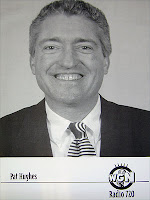 Sitting shotgun, watching Pat Hughes do his thing has been an incredible help. Ron used to call him the professor, but to me that’s really what he was. I watched and listened to him, how prepared, how quick, how descriptive, how mellifluous he is. He’s got the whole package--his timing, his wit, his description. Every day it really was like watching the professor. I watched every lecture. Every game was a learning experience.

Rick: Last year I interviewed Pat Hughes for this blog, and asked him what the worst part of the job was. He didn’t hesitate. For him, it’s the travel. I suspect that with two young kids at home, that’s a difficult part of the job for you too.

Judd: It’s tough, that’s true. It’s not just tough on you; your whole family inherits this schedule. My wife is an absolute saint; I couldn’t do this without her. The travel itself doesn’t bother me, and the work is something I really enjoy, but I do miss being with my family. It’s a hardship on them even more than me.

Rick: Before you got involved with the Wolves, you worked at the Score during its early years—if I’m not mistaken, producing for Dan McNeil.

Judd: Yes, that’s true. I was there on Day 1 of the Score. I was the executive producer of the Dan McNeil (photo) show, which at the time, had Terry Boers and Brian Hanley switching off as co-hosts at first. Eventually Terry was brought in full-time.

Rick: That original stable of Score producers was very strong.

Judd: No question. We all started together on the first day. Mike Greenberg, Jesse Rogers, and I were all producers there. The program director Ron Gleason eventually moved Greenberg to anchoring and reporting. I think he started covering the Bears beat, if I’m not mistaken, and then got the television gig at CLTV, and then to ESPN. He does a great job on that morning show with Golic. But we had a great time in those early days at the Score.

Rick: Do you still listen to sports talk in Chicago (other than the shows on WGN), and if so, what are some of the shows that you think do a good job?

Judd: Oh definitely. I listen to them all. I think there are a ton of quality shows out there, Mully and Hanley in the morning do a great job, and McNeil and Matt have a good show too. I listen to Boers & Bernstein. But I also check out the guys on ESPN. I really think that Waddle and Silvy have a good chemistry together, and I’ll tune in the Afternoon Saloon from time to time too.

Rick: At this point of your career, even though you’re still a relatively young guy, you’ve really done it all in sports radio; reporting, anchoring, hosting, producing, and play-by-play. Of all those roles, which is the most rewarding and why?

Judd: Oh man, I think what I enjoy the most is the play by play. That’s what I’ve wanted to do since I was a kid, and what I’m doing now has exceeded all of my wildest expectations. That’s at my core. But at the same time, I enjoyed all the other jobs too. I still do a fair share of anchoring, and I still do reporting, but the play-by-play job—that’s special. It really is.
Posted by Rick Kaempfer at 8:23 AM