A brand new Chicago Radio Spotlight will appear in this space next Sunday.

In the meantime, I wanted to update what has happened to some of my previous interview subjects since their interviews...

On January 28th, I spotlighted former WXRT and WLUP daddy-o Bobby Skafish about his internet venture Handcrafted Radio. Rob S. has since discontinued his excellent internet offering, but he is back on the radio dial in Chicago, doing the afternoon show every weekday! Check out Bobby on WDRV 97.1 FM,The Drive. Phil Manicki, also profiled on April 1st, is now doing the evening shift right after Bobby.

On February 11th, I spotlighted the host of WBEZ's "848" show, Steve Edwards. Since we conducted that interview Steve was awarded a prestigious University of Michigan Knight Wallace Journalism Fellow. He is taking a leave of absence for a few months as he pursues his further education in Ann Arbor. Unfortunately for Steve, he slummed with a little known author named Rick Kaempfer before leaving on his sabbatical.

On February 25th, I spotlighted WTMX personality Cara Carriveau. In her interview she talked briefly about a new podcast venture she was starting up called "Cara's Basement." That has really taken off, and in the past few months she has interviewed Survivor and Ides of March leader Jim Peterik, Styx guitarist James JY Young, Foreigner 's Mike Jones, Ratt's Stephen Pearcy, and a little known author named Rick Kaempfer.

On March 11th, I spotlighted radio legend Fred Winston. He has since turned in a stunning performance during a WLS Radio Memorial Day Rewind broadcast. A video of that entire day, which also featured John Landecker, Larry Lujack, Tommy Edwards, Catherine Johns and more, is available for purchase via www.Vuolovideo.com. Jeff Davis, spotlighted on May 6th, was also a part of that one-day radio event. 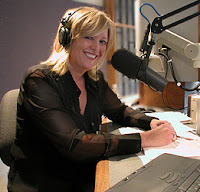 On April 8th, I spotlighted Wendy Snyder. At the time Wendy was trying out to become part of Don & Roma's show on WLS as a traffic reporter, and didn't want to discuss the possibility for fear of jinxing her chances. She has since been named to the position, via Metro Traffic, and can now be heard every morning on WLS 890 AM. She has also been co-hosting a Saturday night show 6-8PM on WLS, called "Women of Mass Discussion."
Check out her MySpace page.

On April 22nd I spotlighted Chicago Ed Schwartz. Since then Ed has written several pieces for the Daily Southtown, including this editorial about Chicago's beaches, and this column about former Chicago Police Supt. Phil Cline.

On May 13th, I was interviewed on Chicago Radio Spotlight by John Records Landecker about my book $everance. Since that interview, "$everance" has been getting great reviews from people in the media, including WLS afternoon host Roe Conn, legendary broadcaster Clark Weber, WGN afternoon host Steve Cochran, Channel 7's Andy Shaw, Chicago Sun Times columnists Robert Feder & Paige Wiser, Channel 9's Larry Potash, and many more. Read what all of them had to say here: Praise for Severance

Have you bought the book yet? You can get it right here: www.encpress.com

On June 24th, I highlighted ESPN Radio's Harry Teinowitz. Shortly after that interview, his co-host Dan McNeil was suspended from the show for comments he made about a producer at Comcast. He has since returned to the airwaves, and the trio of Mac, Jurko and Harry are sounding as good as ever. (By the way, I have written about Danny Mac a few times over the past few decades in Lake Magazine and Chicago Advertising & Media. These are fun articles to read with the benefit of hindsight.)

I've gotten a lot of e-mails and comments regarding my post about my Steve & Garry days: Steve & Garry notebook. Obviously since I posted that, Garry Meier has returned to the airwaves at WCKG, and has appeared on Steve's show a few times. (I think he sounds great, by the way). Here are a few videos I've come across on YouTube about Steve & Garry. I think you'll enjoy these as much as I did.
VIDEO: Keith Olbermann interviews Steve on the anniversary of Disco Demolition (Steve is very funny in this clip)
VIDEO: Steve & Garry commercial from 1987
(P.S. That commercial came out right after I started working for them...which I didn't realize was 20 years ago until I posted this. Yikes.)
Posted by Rick Kaempfer at 12:03 AM