When I interviewed Stan in 2007, he was the co-host of the Stan & Terry show on WCKG. When the talk format was dropped, Stan & Terry were among the victims there...

Stan: After WCKG flipped in October 2007, Terry Armour and I tried to find a new radio home for our show. Our agent advised us to sit tight, and something would probably open up in the spring (2008). When Terry died unexpectedly on 27 December 2007, I decided to take a job out of the media. I've been working as a project manager for a small engineering firm in Oak Brook, IL.

Take One Video Productions (630-953-8030) recorded the entire Terry Armour Birthday/Memorial Service, and has made it available on DVD. The celebration would have been in Terry's wheel house, and I was honored to be a part of the event. I gave Terry a lot of crap because his so-called "buddy" Russell Crowe always had an excuse for not calling into our show. I have to eat crow because the man came through for Terry. Here's the link if you'd like to order a copy.

At Terry Armour's memorial service, Dean Richards invited me to sit-in on his Sunday morning WGN radio show. After being on Dean's show in November, I got a chance to sit-in with Bob and Marianne Sirott for a special Oscar's movie review, also on WGN. 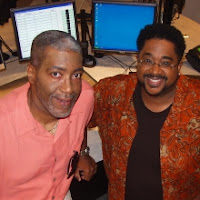 
Rick: You got your start as a contributor to Steve & Garry’s show a long time ago. I don’t think I’ve ever asked you how that came to be.

Stan: When Steve first came to Chicago at WDAI, he did a bit called McHampsterhead restaurants, which was a take-off on McDonald’s…only they served hamster-meat. I called in on that bit a few times, and we hit it off. When he went to the Loop and starting doing the show with Garry, they had a contributor named “The Prince” who called in pretty regularly. Well, apparently he became a bit of a nuisance, and they were looking for somebody else. One day Steve was talking about the boat people living in the Orange Bowl in Miami. He said that he wanted to get one of them to be his housekeeper. I called in to say “Yeah, I bet you do. You want to get between those golden arches, don’t you?” He had never heard that term before, thought it was funny, and gave me the coveted hotline number. I’ve been a contributor to the show ever since.

Rick: I want to ask you something that I think only you can answer. You were there throughout all of the Steve & Garry years, and saw the ups and downs while it was happening. You were also a part of Garry’s show immediately after the breakup, and then a few years later you became a part of Steve’s show. I just wanted to set the stage for all you knew and all you had seen before pointing out that you were also there last summer at the beach when Garry showed up at Steve’s live broadcast. What was going through your mind as you watched that now famous one-day reunion happen?

Stan: That was kind of weird. The show had been planned for a long time. It was part of Steve’s back to the beach tour. Early on we heard rumblings that Garry was within earshot, but nobody on Steve’s current staff knew Garry, and they weren’t sure it was him. When Steve invited him up and he actually came, I had no idea which way it was gonna go. Up until that moment, I was sure that the only way those two guys would see each other again was when one of them was in a box. I was really rooting for it to go well—because you know you just get to a certain age and realize that you don’t have enough time left to be bitter—you just have to let it go. And they did, and it was actually pleasant. When they got back on the air together, and dealt with each other in the way they were most comfortable dealing with each other, you know, on the radio, it was fine.

Rick: I thought it was one of the most memorable shows I’ve ever heard in my life.

Rick: And now you’re on between them. How weird is that?

Stan: Not weird at all. You know, I was there at the Loop when it was Steve and Garry in the afternoon, and Johnny B in the morning, and the vibe in the hallways here at CKG now is much more relaxed than it was at the Loop in the day. We’re all on the same team here. The goal is the same—to make this station as good as it can be. Steve and Garry are both working as hard as they can to make that happen, with good radio.

Rick: So let’s talk about the Stan & Terry Show. What is it like working with Terry? 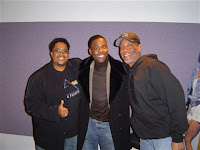 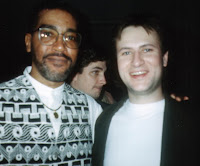 Stan: There are a lot of similarities. Terry is like Seka in that he was a known person before he starting doing radio—he was already Terry Armour, Trib columnist. Seka was known too…although guys weren’t used to knowing her with both of their hands unoccupied. The big difference between the shows is that Let’s Talk About Sex was really the Seka show. I was really just there to run the controls, and move along the show in a coherent direction. Here we’re really a partnership like you and I were with Ebony & Ivory (photo). But there’s also one huge difference between then and now, and that’s the FCC climate. We could never get away with the kind of material we did on Ebony & Ivory now. Not even close.

Rick: That’s true. Most of the material you did with Steve & Garry couldn’t be done now either.

Rick: How do you feel about that?

Stan: It’s a pain in the butt. I went back recently and looked at some scripts I did for “Cecil & Hash Brown” (a bit Stan wrote for Steve’s show) and those won’t fly now. None of them can be done in our current climate. And it’s not just for obscenity or indecency reasons. It’s just too easy to offend people now. Terry made a comment about autism the other day and we got a bunch of upset e-mails. Our policy is that you can’t apologize for everything all the time, because if you do, then those apologies don’t mean crap.

Rick: What are your thoughts about the Imus controversy?

Stan: I don’t know him, so I can’t say the guy is a racist. I think what happened there is that he got a little too comfortable. He said it for his audience—he was trying to entertain his audience, and he knew that they knew what the show was all about. But he just got a little too comfortable. He probably would have been fine if he stopped at “nappy headed” but as soon as you drop a “ho” on people... You could hear in his voice that he was a little uncomfortable after he said it—like he was thinking— “Ooh, that’s got a little hair on it.” But then his producer hopped in, and dropped a jig-a-boo, and it was all over.

Rick: So you thought he should be fired?

Stan: No, I don’t think so. I don’t condone what he said, but I do think he has the right to say it. Don’t get me wrong, he should be ready to take the heat, but he shouldn’t be fired.

Rick: Do you think the sponsors cancelling had anything to do with his firing?

Stan: Yes. It had everything to do with it.

Rick: So now that you’re in the groove, working on the air full-time, doing a talk show five days a week, has your approach changed at all? 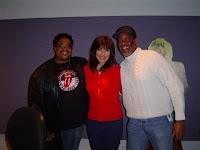 Stan: Not really. My approach hasn’t changed. My mindset has changed. When I was only on the air occasionally I really over-thought things—tried to make every word count. When you’re on five days a week you discover pretty quickly that that don’t work no more. So you try to pace yourself, and that’s the great thing about having a partner. On days when you aren’t at full speed or you’re worried you aren’t bringin’ it, you have someone else to pick up the slack.
(Photo: Stan & Terry with Joan Esposito)

Rick: I must say, I think the two of you sound really relaxed on the air. That’s not easy.

Stan: It’s a mindset. We don’t think so much about all those listeners out there, we’re just talking to each other, trying to make each other crack up. The trick is to beware of not being too inside, and make sure you don’t fall back on visual gags that don’t translate over the radio. Sometimes you see that with stand up comedians who do radio shows, where they’ll have a facial expression or something that gets a laugh…and the listeners are thinking “What’s so funny?”

Rick: You got an Emmy nomination for your work at Chicago Tonight a few years ago. Are you planning on doing any more television?

Stan: I’m actually planning another “Back in the Day” feature for WTTW now—and that should be on soon. Terry and I would love to do a celebrity interview show too—we’ve done so many interviews where we thought ‘Damn, it’s too bad that wasn’t on film.’ Although, if the cameras are there, who knows, maybe that changes the whole laid-back dynamic.

Rick: You’ve interviewed a ton of celebrities on the show now. Were there any that surprised you?

Stan: Russell Simmons. I thought he was going to be this laid back dude, but when he was on with us he was constantly checking his Blackberry and talking on the cell-phone, and when the interview was over he was outta there, like his clothes were on fire. John McCain on the other hand, I thought he would be stiff, but he was totally cool. He made us laugh. And Halle Berry got so comfortable with us she actually swore. That surprised me.

Rick: I heard she even kissed you.

Stan: Yes, she did. I usually don’t do the friendly kiss thing. That’s just not my scene, but Terry did it, and I thought—hey man, I don’t want “He turned down a kiss from Halle Berry” on my resume, so I got one too.
Posted by Rick Kaempfer at 12:02 AM