Jeff Davis can still be heard everyday on Chicago radio as the voice of WLS. He lives in Los Angeles now, doing voice and film work.

Rick: Your voice has been a staple of WLS for quite awhile now. How long have you been the voice of WLS, and what are some of the other stations across the country that we can hear you?

Jeff: It’s hard to believe, because I’m so much younger than all the other personalities, but I’ve been involved with WLS for 33 years. I’m also better looking… seriously, it has been a long time and, professionally, the most fulfilling experience. Currently I’m the national voice for a couple of shows, I’m the voice you hear introducing Bob Uecker on the Milwaukee Brewers radio network and, later this year, the Green Bay Packers. I’m on radio stations all across the U.S., including WLS, WTMJ-Milwaukee, WSB-Atlanta, KCMO-Kansas City, WDBO-Orlando, WNTR (“The Track”) in Indianapolis and many more.

Rick: Chicagoans probably remember you most for your contributions to WLS in the music radio days. What are some of your fondest memories from those days?

Jeff: I think to see WLS evolve has been exciting and to be a part of that evolution has been interesting. Very few people get to be in that transition and survive through two distinct eras. Naturally, I have lots of great memories. One thing I’m most proud of is when I discovered an old Styx song on a local Chicago jukebox. They were then a local group from Chicago, without a recording contract, and presumed to be dead in the water. I lobbied hard to get WLS management to let me play the song I heard on the Werlitzer. Tommy Shaw is still a good friend and, in fact, we live next door to each other out here in Hollywood.

Rick: People may not realize that you are also one of the foremost WLS historians. Tell us a few things that we might not know about the history of WLS.

Jeff: Almost everyone knows that WLS stands for World’s Largest Store and in its first several years was owned by Sears. Since its inception it has been responsible for many radio “firsts” and a stack of awards. The WLS First National Barn Dance was the inspiration for The Grand Ole Opry in Nashville, having been brought to Nashville by George D. Hay, WLS’ first announcer. In the early 1930’s we were the first to simultaneously broadcast from land, sea and air. In 1937, WLS feature reporter Herb Morrison reported from Lakehurst, New Jersey as the Hindenburg derigible exploded and uttered the, now famous, words “Oh The humanity!” We won a DuPont Award from Columbia University in 1948. We’ve won many awards from news agencies such as AP and UPI and multiple wins of the Edward R. Murrow Award over the years and Legendary Station props with a MarconI Award. The number of awards won by our personalities is staggering.

WLS has also been home to legendary radio people who have gone on to Hollywood including Western movie stars Gene Autry (photo), Rex Allen and Max Terhune. George Gobel (your parents will remember him as “Lonesome George”) was a national television pioneer who also was a regular on Hollywood Squares, Patsy Montana, Andy Williams, the legendary Pat Buttram (Mr. Haney on “Green Acres”) and… oh yeah, me! I’m co-starring in a new movie just being released on DVD called “Hell To Pay.” There were many, many people who transitioned to even bigger careers from WLS. I may write a book about WLS soon and the history is so rich it will probably be hard to lift! Sorry for the shameless self-promotion!

Rick: As you mentioned, these days you're working out in Los Angeles--acting, doing voice and film work. Where can we see and hear some of your film work?

Jeff: “Hell To Pay” is available in 20,000 stores including Blockbuster, Walmart and walmart.com. Another movie I did with Coolio (photo) is currently a top seller and that film is called “Gang Warz.” Those are the most recent. I’m also set to be in a movie with Faye Dunaway that will begin shooting in a few months. There are some others but those are the most recent.

Rick: Do you get back to Chicago often?

Jeff: Not as often as I’d like. I was back a couple of years ago to host the WLS live broadcast from the Chicago Theatre with Rush Limbaugh, Tony Snow and some WLS legends such as Clark Weber (photo). Clark’s one of the best and I consider him to be a good friend. I was also a guest at the Radio Hall of Fame Awards in 2005.

Jeff: Most of the people I look up are friends not in Radio! If I’m at an event and there’s a WLS alum there it’s like no time has passed. I occasionally speak with Larry Lujack from his palatial estate in Santa Fe, NM, Tommy Edwards mostly by email or pass along words to Landecker, all of whom I admire and feel proud to call friends.

I stay in touch with some of our tech people because I used to bore the hell out of them with technical questions. I once asked a former WLS chief engineer back in the 70’s, “If TV audio’s on the FM band, why can’t broadcast TV audio in stereo?” Seemed like a reasonable question. Without missing a beat he fired back, “Who the hell would want to do that?” I got the same response a few years later when I asked, “Since computers use magnetic media and audio tape is magnetic, why can’t we use computers to edit audio?”

We all have an inkling of what the others are doing. In radio, it’s about the closest thing to being a member of the Beatles in terms of the way it feels. We were all part of a unique club that will never happen again. 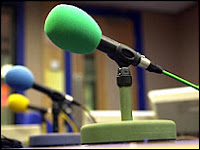 Jeff: It actually started changing before I got into radio. In the 60’s when I was still in grade school various music acts would make appearances with local Deejays to promote their music. As time went by and the money motive became the dominant force it became de rigueur to expect to be paid for those appearances and, thus, that disappeared. Radio became a business after the 1920’s and it has been morphed into something that is more business than creative that a lot of creativity has been choked from it.

Voice tracking and technology has made it possible to do the things stations need to do with far fewer people. The exodus of music stations from the AM band allowing “baby DJs” access to what was going on in other cities caused that resource to dry up. Now we have, after that long dry spell, the Internet, to hear what is not only happening in Atlanta, GA but also Athens, Greece. So it has come full circle.

But the business aspect has choked creativity with the exception being a handful of people dotted across the country who are self–motivated to excel at their craft and work “off the clock” to make their work exceptional. They do it for themselves and the listeners. There is no more farm team, so to speak, and this has given stations fewer options when it comes to finding talent.

Most PD’s will tell you that the work ethic has also changed… and not for the better. The quest to be a good broadcaster, it seems, has been replaced with an attitude of “show me the money.” The problem is that there are fewer “big money” jobs and when the money base for talent dwindles the motivation to make it a professional choice falls to those who aim low and achieve it. The talent pool is drying up due to the heat put to the feet of local stations to do the work cheaper and with smaller staffs.

Technically, broadcasting has never been better. The tools to extraordinary work are at the fingertips of even the smallest market radio station talent. There are some amazing talents out there but there are fewer top caliber people left to do stellar work. No matter how much technology is available there has to be true talent to bring life to a radio station. There is a perception among older broadcasters that radio companies could care less about quality as long as it doesn’t affect the bottom line. It’s all about money now… and that’s sad. 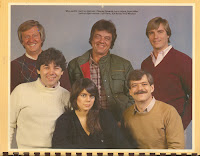 We had lots of fun when I was in radio as a personality and the kinds of things we did that made it fun are not as prevalent now. (Photo: 1984 WLS on-air staff) The PD’s I worked with— and I’ve worked with some of the best— hired good people who loved radio and let us do our jobs without a lot of interference. We knew how to sell the radio station without flip cards because we related to people one-on-one. If you worked on WLS it was impossible not to be enthusiastic when you were on the air. You were on the legendary 50,000 watt blowtorch! We had a blast because we had mentors, collaborators and instigators. There was more freedom to experiment on the air. Radio personalities had more celebrity status in the 60’s and 70’s and, I think, into the early 80’s. Some of us even got fired for having too good of a time. I wouldn’t trade that experience for anything.
Posted by Rick Kaempfer at 12:01 AM