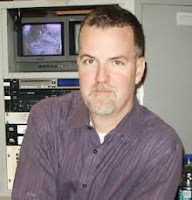 Steve Bertrand is the morning news anchor on WGN Radio. He has been working in various different capacities at the station since 1985.

Rick: First of all, congratulations. You were recently given the Communicator of the Year Award by your alma mater, Marquette University. I know you've won a bunch of awards in the past (including a Peter Lisagor Award), but this one must be special to you.

Steve: Thanks. I've never been a big awards guy but I am honored with this one. Marquette is a great institution that continues to have an impact on me. I love going back up there to meet with students. I also love that their basketball team is as strong as it is. Now if I could just get Chicago media to give their scores more often. Marquette is a top 20 team, with more students from Illinois than Wisconsin. Who cares about Notre Dame?

Rick: You've been at WGN now for more than 25 years. For many of those years WGN was just about the most stable radio station in America. That has all changed recently. How have you adjusted to the changes? 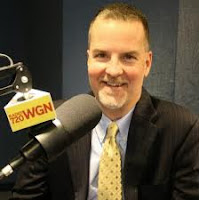 Steve: Have the changes stopped? Let me start by saying I'm very happy with the direction we're headed. It's all good. But I'm not going to insult you or your readers by pretending there weren't a couple hellish years. I think everyone who worked at the station knew we needed to shake things up but the atmosphere became almost oppressive. I've come to hate the phrase "change is good." Change for the better is great but change just for change sake, without forward direction, is demoralizing. At one point I was told to stop pronouncing the "t" in President Obama. It sounded too newsy. So for more than a year I referred to the President of the United States as "Presdeh-Obama." I've pretty much kept my feelings to myself until now but am comfortable saying this knowing we are headed toward brighter days. The Tom Langmyer/Bill White train is a much more pleasant and productive ride. (Sucking up ends now.)

Rick: You have always been more than just the newsman on the shows you've been involved in, and to tell you the truth, when I heard that the newsroom was moving up to the 4th floor a few years ago, the first person I thought of was you. It must have gotten a little more difficult to chime in since the move. I was up there one time, and the atmosphere was almost like being in a library...very un-radio like. 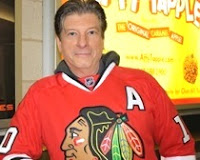 Steve: That's a very perceptive question. My closest co-workers at the radio station have always been from every department, not just the newsroom, so I did not take it well when I heard we were moving to the Tribune's 4th floor. Because we were moved upstairs, I would go weeks without seeing Garry Meier (photo) or John Williams in person. It made it harder to do the job. Now, we built some great relationships with the Tribune reporters and I'm glad for that. I'm just gladder to know we'll all be together again on the 7th floor. (Did I mention we're headed toward brighter days?)

Rick: Now, of course, you're part of the Jonathon Brandmeier show. How are you adjusting to getting up so early in the morning? People who haven't done it, don't understand how taxing that can be on a person's health. Have you developed a routine yet?

Steve: I've been shocked by how well I've adapted. My wife will tell you I've always looked for a reason to go to sleep, so saying goodnight by 7:00 or 7:30 has been easy. The work at the station is made much easier by Justin Swain, who is the morning reporter/producer. He makes sure all the ducks are in a row. I get home from work around 1:00, take a quick nap and then hit the health club for an hour. Once or twice a week I stop by Black Dog Radio studios to record an author interview for my Facebook page. I like to cook so I make a nice meal for my kids each night (which they ignore) and then pack the leftovers for the next morning.

Rick: You sure sound like you're having a good time on the air with Johnny. What has that experience been like? Have there been any surprises?

Steve: I am having a blast. Each day is a surprise. I like that. We're still getting our feet under us as a team, but that's okay.

Rick: Any favorite moments so far?

Steve: He cracks me up. Everyone talks about how easily distracted he is. It's true. But at the same time, he doesn't miss a thing. I don't know how that works. He is so good at convincing people to let their guard down. I think it's because he's nice to them. He'll do an interview with someone who should be on the defensive and, before it's over, they'll invite him over for dinner.

Rick: What are some of the differences and similarities between Brandmeier and some of the other people you've worked with?

Steve: I have been incredibly lucky in my career to work with hosts who are very generous professionally. It was most obvious with Kathy and Judy. They would let me say just about anything and do just about anything on their show. We were like family. My God we used to get into snits off the air (mostly me). I'm sure it helped all of us, but it helped me the most. Even before them though, Roy Leonard and Spike O'Dell were completely open to anything I had to offer. That's a huge confidence builder for a young guy. I've told this to Roy many times, but I consider him my mentor, both professionally and personally. Just a great guy to work for.

Rick: I always enjoyed the dynamic of you and Leslie Keiling on John Williams show. Your on-air political arguments were almost exactly the same as the political arguments Leslie and I used to have off-the-air during our days together on John Landecker's show. It used to drive Landecker crazy. How did John Williams feel about it? Did he encourage it or discourage it? 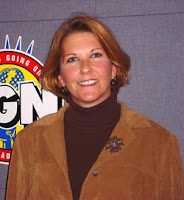 Steve: When it comes to professional generosity, John is King. Leslie (photo) has a way of riling me up. She would probably say the same thing about me. The thing is, we completely agree that we love John and want to do whatever we can to help him succeed. I still listen to his show everyday. In fact, I just sent him an email to tell him about why he's wrong about Matthew Broderick and the Super Bowl.

Rick: One last thing before I let you go. You and I recently ran into each other at a banquet I was MCing. Sorry I pointed you out to the crowd and embarrassed you like that. I'm sure you had people coming up to you all night.

Steve: No worries. The response from people was nearly universal: you sound shorter on the radio.
Posted by Rick Kaempfer at 12:30 PM