When I interviewed Geoff Pinkus late last year he was doing a Sunday night show on WIND. He is now the full-time overnight host at the station (Mid-4AM). His producer is former Stan & Terry producer Bonnie Sporn.

Geoff: Chicago Overnight has really been a great experience. We're getting calls from true third shifters, we hear from people on their way to work, on their way home. Because we're on a political station, we do talk the talk, but we're not restricted to one perspective and that's what our listeners seem to like.

Our listeners include the voices of true Chicagoans; policemen who want to vent, insomniacs that have found a friend, and truck drivers that need the companionship and more. Our guests are lively and informative; we had Vic Guistino, aka The Professor, give us the history of Chicago with all the nitty gritty stories, we had James Laski explain his personal sabotage with the dirty games of Chicago politics, and then we've also had bar owners telling us their 3am drink specials.

The discovery of this new sub-culture of late nighters has been exciting and beneficial for both the host and we thing the audience as well.

Geoff Pinkus is the host of "Living Large," heard every Sunday evening 5-7 PM on WIND-AM 560


Rick: How would you describe your show to people who have never heard it before? 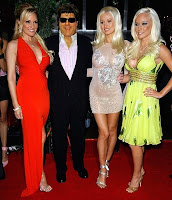 Geoff: It's a man show. It's from a male perspective. We talk about what men like: women, cars, cigars, motorcycles, hunting, fishing, sports, and we take the male perspective because men have become emasculated in our society today. They've lost their way, always asking for permission instead of forgiveness. Women want men to lead. They want us to take charge. And that's what the show is about. In a good way, not in a chauvinistic way. We're there to help guide other men, and remind them what it means to be a man.

Rick: When I first heard your show my first thought was: "Hey, this guy is pretty good." How is it that I hadn't heard of you before?

Geoff: Well it's just one of those things. I have always wanted to do a radio show. It was my passion. I followed the business closely, but for many reasons, never pursued it. I was in the real estate business. Well about 2 ½ years ago a friend of mine says 'want to do some PSAs' and he thought it was so funny how excited I got just putting on the headphones. I really was excited too. I always wanted to be in radio. I practiced in the car, in the shower, you name it. So he told me if I really wanted to do radio, I should check out WRMN in Elgin. They were doing pretty good business doing a QVC kind of thing, but they also sold some brokered time. It was like $200, and I thought—what the heck. That sounds like fun.

So I hit the streets and got a sponsor to sponsor the whole thing. It was a real estate show, and it was so much fun—taking calls, being a wise guy, trying to do the whole Steve Dahl thing.

Anyway, one day a listener calls me up and says he thinks I need to go to a bigger station. He was a former sales guy at the Loop and knew people in the business, and he made some calls for me, and that's how I ended up here—doing Condo Talk. Unfortunately, my co-host at the time was this woman suggested by the sponsor, and she was terrible—always saying things like "Don't go there" when I would make a joke. 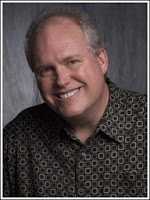 After a few months, the sponsor wanted to leave, so I had lunch with the GM. He asked me to take over selling brokered weekend programming, because I was doing a show already, and I could talk to these people—and I thought, yeah, what the heck. It was a good opportunity to get in the door and learn as much as I could about the business. Anyway, John Howell (photo) did a show with me on December 1st, I'll always remember that date, and when the show was over, he says, "Pinker, you should do a guy show. There's a guy who does a nationally syndicated cigar show, and you're better than him."

I knew right away that was a good idea. I could be myself, do my thing, and the demo was absolutely perfect. I called it "Living Large" and I've been doing it ever since.

Rick: I think it's safe to say that your show is not very much like the other shows on WIND—not exactly typical "Salem Broadcasting" fare. Has the content of your show ever caused problems with your bosses at the station?

Geoff: We do a pretty edgy show, but we've only run into a problem once. The company won't allow advertisers like casinos, gentleman's clubs, Viagra, and that sort of stuff. One time we talked about gentleman's clubs, and we got one hate e-mail. But other than that, we haven't had any problems.

Rick: In a lot of ways, you remind me a lot of Mike North. I think both of your shows are a testament to what can be accomplished if the talent takes a strong interest in selling or helping to sell his own program. Do you agree?

Geoff: 110%! I couldn’t agree more. I think if you have sales talent plus you have talent on the air, you can be a real plus to any radio station. If you're bringing in the money, they're not going to get rid of you. With the way radio is these days, there's a huge opportunity for people like me.

Mike North (photo) and I actually did the show together once, and he was really encouraging to me. He said it was nice to finally be talking to someone who gets it—someone who approaches it from the business side—someone who has a business brain.

Geoff: It's a combination. I'm a radio host that happens to have 30 years of sales experience. It's like it was meant to be to wait this long to do it, because now I can do it right. I sell my own time, and I can tell you that advertisers love it, LOVE it, when I go to a sales call myself. They say "You're the talent AND you're selling it?" That's not something they run into every day.

Rick: What are some of the traits from your sales background that help your on-air performance?

Geoff: I try to focus on the listeners first, by making the show entertaining and fun. I treat them like a client—if they're happy, I'm happy. Plus, I also understand how important the advertiser is. That's the business side. Like it or not, every single thing you hear or see in the media is driven by the sponsors and advertisers. So I get that. They are the lifeline.

Rick: On the other side of the coin, is there anything you've learned from doing a show that has helped you in your sales job?

Geoff: Yeah, if they listen to the show and they like you on the air, they're gonna buy from you. It's not even selling when you run into that. People buy from people they like. I get the biggest kick out of it when I run into people that like the show. It doesn't inflate my ego, it inflates my heart. Someone recognized my voice at Binny's the other day. That's just the greatest. I really appreciated that. It made my whole day. Who doesn't like the applause?

Rick: Your co-hostess is former Channel 5 television reporter Amy Jacobson. How did you meet Amy and how did she become a part of your show?

Geoff: I met her through my friend George. He runs a Greek media club, and they meet somewhere every month or so, and he invited me to stop by. Amy (photo) was there, and we hit off, and I had her on the show. Amy asked George if I might be up for having a regular female on the show, and I said I would, and we've been doing the show together now for a good month or so. She and Frank (Mahony, producer/co-host) and me have a great time.

Rick: Where do you see your show going from here?

Geoff: I'd like to get it to as many markets as possible, to get it into syndication. That's my ultimate goal. Then I'll really be "Living Large."
Posted by Rick Kaempfer at 4:05 PM