When I spoke to Kevin last summer he was with Audience Development Group, a consulting firm. A few months later he was named program director of 106.5 The Arch in St. Louis...

Kevin: The new opportunity at 106-5 The Arch is going extremely well. This is the most successful Adult Hits brand by any yardstick in the country. The latest trend delivered #1 25-54 for the month and is trending up over the last three trends! The difference is that THIS Adult Hits station followed a customized blueprinted for St. Louis, not national success.

It also presents a foreign opportunity for me. Every one of my previous station-level programming call-ups were rescue missions. Stations which needed immediate triage care and eventually rebounded. At 106-5 The Arch, I've inherited a wonderful brand populated by excellent professionals at every level. My job - don't mess it up!

Plus, Bonneville is a wonderful company that has values in line with my own. Far more than the bottom line, Bonneville honors their people as their most valuable resource - above all. Nice to see that in this or any climate.

The previous 2 1/2 years has taught me that of the 11,000+ radio stations in our country, the best ideas are developing out of local, small market properties. Free of the encumbrance of publicly-traded, corporate mis-steps, the nimble owner-operated brands are producing truly great radio for their markets.

For years, smaller markets were often scoffed at for sounding - 'small market'. You and I evolved out of small markets. Now, in this environment of large-market cookie-cutter formats and nationalized talent syndication, the small market station is emerging as the place many long to return be, in order to reclaim their craft.

Kevin Robinson is a strategic partner at Audience Development Group. From 1992-2004 he was a prominent program director in Chicago at WJMK and WZFS/WYLL.


Rick: During the heyday of WJMK, you were the program director. I don't think people realize or remember just how big of a ratings powerhouse that station once was, and you were guiding it during most of those years.

Kevin: During that stretch, there we so many people who helped achieve a fantastic run where we were Top 5, 25-54 persons, 23 of 29 Arbitron surveys - often without resources while our competitors where investing truckloads in outside tactical marketing.

Part of the reason we flew under the radar was that I wasn't nearly the 'legend' in programming guys like the great Mike Phillips at K-EARTH or Joe McCoy (photo with Kevin) at CBS-FM were --so they received more well-deserved press, especially in the trade publications. If you remember, I had the personal policy of no trade press - thinking at the time that if you give an interview, you're simply sharing secrets.

Plus, I never lobbied hard for industry awards - although we received many Marconi nominations I thought the NAB voting process was flawed. Basing a nomination on a package of written, non-verified words without audio was simply wrong to me. But I was proud of the numerous A.I.R awards the staff and station picked up - audio nominations voted on by our peers, imagine that!

Rick: When John Landecker was hired at WJMK in 1993, that really marked a change in WJMK's approach. It was the first time WJMK really allowed a full-service morning show. Talk about some of the growing pains of that process from your perspective.

Kevin: The sole reason I was hired (other than that I would do it for the lowest cash amount and would put up with the dung flying out of the corner office) was to bring life to WJMK between the records. I was a Top 40 guy, NOT an oldies guy. I learned the music from my hours spent with Bill Drake, (Yes, that Bill Drake), then employed Top 40 momentum and acumen, including identifying a morning show that could drive numbers.

When Landecker (photo) was working with Saul Foos, he tried to get anyone from the Foos talent pool on WJMK. I kept asking him, 'why not YOU?' He said NO several times, until we had him fill-in a few times in August 1993 then put together a deal the next month.

In retrospect, Landecker tried too many things on the audience at once. He eventually grew into a GREAT morning talent after inside and outside guidance, including spectacular coaching and packaging from you. I still play my Landecker & The Legends CD's!

Rick: What are some of your fondest memories from your years at WJMK? 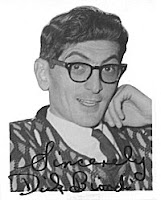 Think about it - Legendary air talent like John Records Landecker, Dick Biondi (photo) and Catherine Johns, plus Brant Miller (Now mornings on WLS-FM) on weather and Richard Cantu on news (now with ABC Network News). Great jocks like Scott Miller and Greg Brown (now with WLS-FM). The BEST part-time staff in the city - three of our part-timers were former Chicago morning men. The parodies you and Vince Argento (now with Jonathon Brandmeier) put together and Bob Lawson's amazing imaging (who's still with WJMK - whatever they are doing) glued it together.

Plus across the hall at sister station WJJD we had Legends Clark Weber, Bob Hale and Bob Dearborn.

I have GREAT memories of everything I learned from the staff roaming the halls of 180 North Michigan. But bad memories of the furniture.

Rick: Is there anything in retrospect that you would have done differently?

Kevin: I would have celebrated our victories with greater vigor and caught more of the fecal matter flowing down the halls.

Rick: I've previously written about the experience of working with former WJMK general manager Harvey Pearlman. I think it's hard to explain to current radio people what Harvey was like. How would you describe his personality?

Kevin: Many of the Harvey stories are true -albeit amped up as those who translate history tend to do. He was one of those colorful radio icons that's hard to explain. He liked to yell, and he claimed he never fired anyone - people simply quit. Harvey could be radically angry one minute then your 'grandfather' the next. He was generous in his own way - I learned more about the business of radio from him than anyone else.

Harvey rarely cut people, if ever - the wholesale staff gutting took place after he left. Some of my favorite quotes, which will never be published, came from Harvey's office.

Rick: After you left WJMK, you were working with CBS as a national program director of one of their formats. In that role you traveled all over the country listening to some of the other CBS shows. Is there anyone out there in a smaller/medium sized market that you think would fit in well here in Chicago?

Kevin: That's a good question. The BIG issue is that MOST great radio talent do such a GREAT job of serving their local community that transferring them into Chicago wouldn't be a good match.

But since you're pinning me down to ONE, John Jay & Rich in Phoenix/Tuscon are simply amazing. They grab HUGE shares in and out of their target. Why Clear Channel hasn't placed them on Kiss in Chicago is stunning to me.

Rick: You've worked with some real legends. What Chicago radio personalities do you admire the most and why?

Kevin: Well, all of the people I mentioned earlier. Plus, I wish we could have worked with Fred Winston (photo) more but there was a history that proceeded you and me. Ron Britain is in the same boat. My three hour Ruth Chris lunch with Ron is the stuff of legend.

You might remember where Melissa Foreman was going to join us until she met Harvey. Her addition to the Landecker in the Morning show would have been remarkable.

Rick: You're currently working as a consultant. Tell us a little bit about what that entails?

Kevin: I hate the word 'consultant'. Yuck. It carries so much negative baggage from those bad ones who've carried the bag before me. Since I've had exposure and success in so many different formats, my clientèle runs the spectrum. Country, Oldies, Christian, Hot AC, Talk, Mainstream AC - I have them all.

I also have a few Americana formats - which I think is the NEXT BIG THING.

Plus, for some odd reason I've become somewhat known as a talent coach. There was one situation this Spring (because I don't share my pedigree unless asked) where we had a 'difficult' morning show. The owner, much to my chagrin, pulled out The Landecker Card to get him to pay attention. Ugh.

Most of my partnerships are in smaller markets and I try to lend what I've learned from guys like you to their particular situation - working completely custom depending on market opportunities. I'm talking to you now from Tyler, Texas!

Never do I come into a situation with a format or 'safe list' in my back pocket. Every opportunity is different - which is why I openly question the 'plug & play' format option.

I work with my Partners Tim Moore out of Naples and Brian Wright in Grand Rapids.

Rick: I've become a big fan of your weekly newsletter, The Robinson Report. You write about the business in a realistic, but positive way. How does one go about getting on the list to receive it?

I try to write The Robinson Report for the NEXT generation - those who haven't been soiled by cookie-cutter formats and give them ONE thing to put into play (or to think about) each week.

The response is strong - which tells me there's plenty of life left in terrestrial radio.
Posted by Rick Kaempfer at 1:42 PM