KC Lupp was part of the morning show at WGCI in the earlier part of this decade. He currently works as an actor/disc jockey in Oklahoma but is back in Chicago this summer starring in The Full Monty at the Marriott Lincolnshire. The Chicago Tribune gave him an excellent review.


Rick: KC, first of all, welcome back to Chicago. Have you been back much since you moved down to Oklahoma ?

KC: Unfortunately, after having children, a new mortgage, my radio job, voice over jobs, PA job with the Tulsa Talons Arena Football team…etc. I haven’t been back in Chicago since ’02.

Rick: People probably remember you best as KC White (so named because you were the white guy) on the morning show at WGCI in the earlier part of this decade. Looking back on those award-winning years there, what are a few of your favorite moments?

KC: Ah, the Blazin’ Caucasian..the Funky Honky…the Tryin’ to be Blacker Cracker…those were the days! I loved being at GCI, and I've run into a lot of old friends since I'm back. Thank you for saying they were award-winning years. That has to be a highlight: winning three AIR Awards. But honestly, my favorite moments were when I was at GCI events and seeing the passion the listeners have for their radio station. I brought a friend to an event on The Odyssey Boat trip…and watching people ask him if he was ‘the white guy’ was quite a kick. Also, the ins and outs of radio I learned from Elroy Smith (photo). He gave me a huge opportunity, not only to be on 107.5, but to jock…and even fill-in as morning host. That was a dream come true.

Rick: Other than Elroy Smith, who were some of your radio mentors or role models in town?

KC: I have to say, Kevin Matthews (photo) was…and still is an idol of mine. I was fascinated by a DJ…that was an entertainer. And he was successfully able to transfer theater and standup comedy to the airwaves. When I met Dorothy Humphrey as a co-worker when I started at Shadow/Metro, I was literally star struck. Being a student of theater, I came into radio later, mostly as a listener. It was exciting to me to step inside WLUP, to meet people from WBBM, XRT, and have drinks with all these talented radio people that I felt like I knew for so long.

Rick: You're back in town to perform in "The Full Monty" at the Marriott Lincolnshire. One of your former radio colleagues, Joe Collins (who is also an actor), told me that you are a very good actor-- truly a triple threat on stage. Do you consider yourself an actor first, and a radio guy second or vice versa?

KC: Wow, Joe (photo) is awesome. He is a fantastic talent and has such a passion for theater. He works very hard producing, directing and acting as well as being a traffic guru. I started theater when I was 8, and worked at it as a career full-time right out of high school. I was very fortunate to get work here in Chicago , and tour with shows like “Joseph and the Amazing Technicolor Dreamcoat” which luckily stayed here in Chicago for over a year and a half. With not starting my performing ‘behind the mic’ until I was 29, I’d have to say actor first, radio second. But, it’s funny, as unstable as a career is in radio…theater is more unstable. I don’t mind not visiting the unemployment office every three months.

Rick: How do each of those facets of your career help or hurt the other?

KC: Great question. Being an actor helped with the ease of ‘being on’ when the mic is on.

Also with simple things like reading liners or voice overs in producing spots. It did have drawbacks though, and Don Cristi, OM of ClearChannel Tulsa said it perfectly. He said, that I have gotten by with my personality, which is great…but I need to learn basic radio formatics. When and why we do things a certain way. He has become such a huge mentor and I wouldn’t be surprised if you are interviewing him when he’s in Chicago running 5 stations.

My time in radio has helped my acting. I believe it has made me a more natural actor. The drawback there is that being behind a mic, you get used to no reaction at your delivery. Was it funny? Compelling? You hope. Now on stage again, the audience tells you immediately if what you did worked…or not.

Rick: Tell us a little bit about the show, and the part you play. 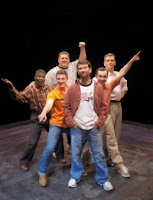 It’s a great musical adaptation of the film. It’s set in Buffalo , NY as opposed to England like the movie. It’s a great show about six guys putting on a strip show to make money after over a year from losing their jobs when the steel mill closed. The show is really about these guys stripping down to their honest obstacles in their life they need to overcome. My character sets it all up with the purpose of making enough money to not lose custody of his son. It’s a fantastic role and I’m unbelievably fortunate to have the opportunity.

Rick: I understand you're still hosting your afternoon radio show while you're in town. Where are you recording the voice tracks?

KC: I’m recording them at the ClearChannel Studios downtown. Don Cristi, OM in Tulsa …and also my PD on 97.5 KMOD told me I should pursue doing this show, that creatively it would be good to be back on stage for awhile. Tulsa CC, and Chicago CC worked hard to make the tracking seamless. My listeners think it’s pretty cool I’m doing my show from Michigan Avenue .

Rick: When the show ends at the end of September, what are your plans?

KC: I’m heading back to beautiful little town of Bristow , Oklahoma to be DJ and husband/dad. No plans on moving back to Chicago …unless some radio gig gets offered! My wife loves being back here…it really feels great to be back home. Chicago is the best city in the country. Hands down.
Posted by Rick Kaempfer at 4:47 PM