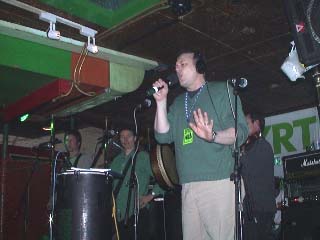 Bobby Skafish has been a fixture on the Chicago radio dial for more than thirty years.


That's him (above) during a live St. Patrick's Day broadcast for WXRT a few years ago.

Rick's note: About six months after Bobby Skafish did a Chicago Radio Spotlight interview with me he got a call from his old boss Greg Solk, who asked him to do a weekend shift on the Drive. It didn't take long before Bobby was back in the saddle again, doing the afternoon show there. He can now be heard every afternoon between 3-8 pm.

I caught up with Bobby again recently and asked him how he liked the new gig...

Bobby: Working at The Drive has been a great source of joy for me. The people are friendly and keep it real-no evidence of ego trippin'. When I get direction on my presentation from Patty Martin or Greg Solk it's done clearly and unambiguously, with the only goal being a better sounding station. The result is that this ol' dog has learned new tricks, for which I'm grateful. They are also quick to compliment, too.

Drive music is so much fun to play. It feels age-appropriate and just plain right. The true test for me is that I instinctively turn The Drive on at home or in the car when I want to listen to music radio. It's a feel good.

Having worked in the Hancock for ten years during my Loop tenure, it's great to be back on a cool stretch of Michigan Avenue. My goal is to not inadvertently plow into pedestrian traffic when I pass the huge Victoria's Secret window display-I'm getting there! Finally, its so boss seeing Bob Stroud again on a daily basis, with the two of us on back to back. Ralph Lauren would be wise to install a webcam in the air studio to give Stroud's Polo wardrobe worldwide exposure on a daily basis.

And now here is the interview from 2007 in it's original form. When Bobby got the gig at the Drive he reluctantly said goodbye to Handcrafted Radio, but I left the information here in case anyone was interested...


Rick: Tell us about your new internet radio venture.

Bobby: Handcrafted Radio is an internet-only radio station I launched 1/3/07. My broadcast partner is Live365 out of San Francisco, the number one provider for net radio. They, among other things, make sure the music publishing companies (ASCAP, BMI, SESAC) get paid, keeping it all legit. When it comes to computers I'm certainly not the coldest beer in the fridge, but this experience has forced me to learn--not unlike the way buying a fixer upper of a home forced me to acquire at least a few skills. It's time-consuming but truly a labor of love. I pick and sequence music which I then upload to their server along with my spoken word segments. Going live is an option, but I prerecord for now, which allows what I provide to replay upon its completion, which right now is about 5 hours in length. I do a fresh show daily and am experimenting with weekend concept- oriented programming. One weekend was the "Handcrafted Radio Chunks o' Rock weekend," blocks of tuned by our kind of artists, be they Johnny Cash, Coldplay, U2, or Clapton. I'm extremely impressed by the sound of the music with this 96k bandwidth, as if I know what that really means. I do know it leaves the sound of FM in the dust and approximates CD quality. It sounds awesome. The higher the bitrate, the better the sound, and the more it costs me. I'm already convincing my 3 1/2 year old daughter that a college education is both expensive and overrated, as are properly fitting shoes and clothing. Seriously, I've so far put the show ahead of the business, but in time monetizing this thing will be properly addressed.

Rick: You've had some incredible highlights in your career. Tell us about a few that make you smile when you think back on them.

Bobby: Career highlights include interviewing Bob Geldof at the Loop the day the Band Aid record, Do They Know It's Christmas was released in 1984. That transcends the usual artist- working- his- record conversation. Also, I got the from the horses mouth interview w/Dave Matthews regarding the dumping of waste from their tour bus into the Chicago River. You could hear the adrenalin and sincerity in his voice, and it made the papers and the TV news.

Rick: You're known as a music guy--someone who truly loves the music he plays. Of the rock and roll artists still working and touring today, who do you have the most respect for, and why?

Bobby: A performer I particularly admire is Chris Isaak. He puts on a fabulous show every time out. Great songs, the band rocks, he looks great, dresses with flair, and is exceptionally funny. He truly entertains. Barenaked Ladies never failed to entertain me the 4 times, or so, I saw them live. Great guys who drew wholesome, sweet fans. I hosted two remotes and an in-studio visit of theirs and they always killed, or at least maimed.

Rick: What is the worst advice radio management ever gave you?

Bobby: One PD and GM duo pleaded w/ me not to leave their station to go work for another, working the fear angle on me with much gusto. They told me how the downtown stations are all impersonal, corrupt, plastic, hotbeds of rampant egomania, and dictated to from out of town owners. Their "stay in our cozy womb" nonsense was purely agenda driven.

Rick: Bobby Knight said that "My Way" was his favorite song because his regrets were too few to mention. Do you feel the same way, or is there a tinge of regret--a performer you never met, a record you never got to play, something you wish you had said or never said on the air?

Bobby: No deep regrets for me and few missed opportunities; I have drunk deeply from the crazy cup called radio.
Posted by Rick Kaempfer at 12:03 AM