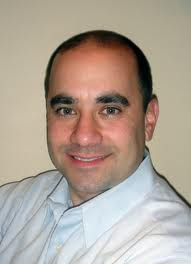 Adam Delevitt is the program director of ESPN Radio in Chicago, WMVP AM 1000


Rick: Next year will be your 15th anniversary at ESPN. Can you believe you've been there that long already?

Adam: It’s surreal. Seems like it was yesterday that I walked down Michigan Avenue on my last day as an intern at WGN Radio in the Trib Tower, to my first day as an assistant evening producer at ESPN Radio in the Hancock Building. I remember thinking to myself: "If it lasts more than a year I'll be happy!"

My last day at WGN radio I got to do one sports update on the “Kathy & Judy” show. WGN newsman Wes Bleed threw it to me and mispronounced my name, and I corrected him. Everyone there made a big deal about that. "Nobody corrects Wes Bleed." I said: "Hey, my name was mispronounced!"

Rick: Who did you intern for at WGN?

Adam: I interned in the sports department for Dave Kaplan (photo) and Dave Eanet. Dan Falato hired me after asking me one question. I was there for six months and I also worked on Sundays during Bears pre and post games with Hampton, Waddle, and Kozlowski (“The Three Bears”). That show was a blast!

Rick: What was the question Falato asked you?

Adam: Who is your favorite play by play man? My answer was Wayne Larrivee …and I was hired

Rick: Was that your first radio gig?

Adam: No. I also worked at One on One sports for three months as a tape cutter. I left my part time paid gig there to take the non-paid internship at WGN. My boss at One on One sports told me I was making a stupid mistake and I would never make it in the business. Every year I see him at the Super Bowl. I just smile and wave at him.

Rick: So which show did you assistant produce when you first joined ESPN?

Adam: Evenings and weekends for Bill Simonson, "The Huge Show”, which later added Lou Canellis. I also produced Sunday Bears/NFL programming which was my favorite thing to do at the time. 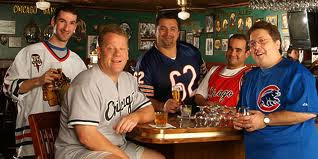 Rick: I first met you eight years ago when I was in the studio to interview Dan McNeil and the gang for an article in Lake Magazine. (Photo: Afternoon show from that era--Ben Finfer, Dan McNeil, John Jurkovic, Adam Delevitt, Harry Teinowitz) At the time you were the executive producer of the show. I remember it being pretty tense. You could hear it on the air, but you could really feel it in the studio. Has that tension level gone down?

Adam: Tension at that time was pretty high between Mac and Harry, even though they cooled off before Mac and the station parted ways. I think the tension level in the studio has gone down since then, but there’ll always be some tense times when you have such opinionated personalities in the same room for twenty hours a week. I just don’t like it to get personal.

Rick: In that article Dan said you were "like a brother" to him. Do you keep in touch with your brother?

Adam: I do. We meet for lunch/coffee every month or so, and still talk on the phone. When you spend so many years with someone in such close quarters, you develop more than just a business relationship – we’ve developed a friendship that continues, and even though we’re competitors and I want my midday show “Waddle & Silvy” to beat him every day – we do still keep in touch.

Rick: Last year the afternoon saloon faced another crisis when Harry Teinowitz was arrested for DUI. That must have been a difficult moment for everyone.

Adam: Harry (photo) told me about it as soon as it happened. He recognized that he had a problem, and he went and got treatment. Harry has been sober for almost 18 months now and is doing great. He has a wonderful support system around him. It’s great have him on the air again.

Rick: As you already mentioned, at any sports talk station you're bound to find strong personalities. I've always thought former producers such as yourself make perfect program directors for stations like yours, because producers have extensive experience dealing with strong personalities. Has it worked out that way for you? How do you think your work as a producer has prepared you for this job?

Adam: I think to some extent it has helped. Every talent wants to be loved. That’s something you learn very early on when you're a producer. Some like tough love and some need more of a bedside manner, but they all have their shtick and you have to be able to adapt to all types of personalities. I will say the former athletes who are on the air always seem to be easier to deal with.

Working as a producer, I always liked to work a few segments ahead to be prepared for anything. Now as PD, I try to stay ahead of as many things as possible - I never want to feel like I’m behind or playing catch up..it’s the reason I get in early (before 6am) and try to plan days, weeks, and months ahead so I always feel we’re prepared for what’s next. Obviously, when breaking news happens everything gets tossed out the window, but it’s always good to have a plan.

Rick: You've been the PD now for almost two years. What's the best and worst part of this gig?

Adam: The best part of this job has to be the people working here, behind the scenes and on the air. We’ve had very little turnover which is rare in this business. It’s such a pleasure to have a family atmosphere. Also, there’s ALWAYS something to talk about in Chicago sports. It’s the best sports city in the country and we never have a lull. And let's not forget that working for ESPN gives me a plethora of resources too. That's always a good thing.

The worst part? It's not even that bad, but there's so much going on sometimes, it’s difficult to listen the station as much as I’d like while I'm in the office. Sometimes I need to get out of the station to listen to my shows in the car or at home (or on the stream) just like a normal listener. In the office, with sales, marketing, and business people popping in all the time, it's much harder to do that.

Rick: I think most Chicago sports fans know about the Waddle & Silvy show, and Carmen, Jurko and Harry. Put on your promotional hat and tell us about some of the other live and local shows on your station that you think sports fans should check out.

Adam: “Talking Baseball” is a Chicago sports institution. This is Bruce Levine’s 21st year hosting that show on Saturday mornings at 9am. It’s been on the same time slot for more than 15 years. Fred Huebner is Bruce's co-host this season and they have tremendous chemistry.

“Chicago’s Gameday” with Jeff Dickerson & Sarah Spain (photo) is a Sunday morning show from 9am -1pm that is a great mix of sports and pop culture featuring two up and coming hosts. Jeff Dickerson is our Bears beat reporter and fill in host, and Sarah Spain is our update anchor on the Waddle and Silvy show and a fill in host. It’s a fun, energetic, and very interactive show that has lots to offer.

“Chicago’s Gamenight” with Jonathan Hood (and a mix of ESPN Chicago.com reporters mixed in) is another must-listen. Jesse Rogers and Nick Friedell join Jonathan on most nights to round out the evening in Chicago sports and keep people up to date on the evening games. Both Jesse (Blackhawks Reporter) and Nick (Bulls Reporter) are also used as show hosts in and out of season too.

Rick: When I talked to you last time, I asked you what it was like to be a producer for a former producer (Dan McNeil) and you said: "Sometimes I have to remind him times have changed since he did this." Now you're the former producer advising producers. Do they say the same thing to you when you critique them?

Adam: Absolutely – and I welcome it! Producers and interns are my eyes and ears to what’s happening out there, and I need them to challenge me on things. I have an open door policy and I love it when my people come in and say “why aren’t we doing this” or “why are we doing this” or “maybe we should try this on air”. You never know where the next great talent, segment, guest, caller, or innovation is going to come from and I try to be as open-minded as possible.

Posted by Rick Kaempfer at 6:30 AM