Brendan Sullivan was a producer on the Jonathon Brandmeier show for ten years, and is now working as a creativity coach. He has also recently become the co-author of a novel (with yours truly) called "The Living Wills"


Rick: You were in radio in Chicago for ten years, but that really is almost an asterisk in your long career, isn't it? You were an actor, a improv artist, a writer, and more. Tell us about a few of those pre-radio highlights. 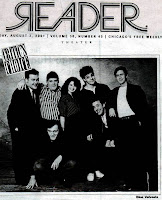 Brendan: Way back when, thirty years ago now, yikes, I actually had a real job selling national advertising for the New York Times. I retired when I was 28 and started doing improv, studying at Second City. I landed at the ImprovOlympic and was a member of Blue Velveeta, an improv group that did very well. Radio was never part of the plan.

Rick: We met when you started working for Jonathon Brandmeier at the Loop in the early 1990s. How did you meet Johnny and get involved on that show?

Brendan: Blue Velveeta, my improv group, was getting a lot of press at about the time "Johnny B. on the Loose" (TV show, summer of 1991) was being produced at Channel 11 studios for NBC Productions. We'd just won a national improv competition. Johnny hired a group of us including Brian McCann, Andy Richter and Kevin Dorff who all went on to Conan, Jay Leggett who has done very well in LA acting and writing, and me. We generated ideas for the show. When the TV show ended, Johnny invited me to join the radio show, at first part-time, and later full-time.

Rick: Officially I believe you were classified as a producer, but how would you describe your list of job duties during those years?

Brendan: "Producer," I have learned, is a term in radio that can mean everything from getting coffee and answering phones to making big decisions about the nature, direction, tone of the show. I didn't do any of that. And I didn't book guests. And I had no technical experience to run a board. I suggested, researched, created, generated 'bits' for the show. Hey, Johnny, there's a guy in Wyoming with three testicles. Why don't we call him and say that you've only got one. Would he be willing to donate his extra? Very high brow stuff. I also wrote pre-recorded bits that we called 'theater of the mind' and did some character voices live on the show.

Rick: I may be biased because of my heritage, but I always got the biggest kick out of the Nazi Stormtroopers bit that you did with Jeff Hoover. What was the origin of that bit?

Brendan: As I recall, we were on the Loop, and one morning the announcement was made that our AM station, which shared our space, WMVP was either going all-sports, or the all-sports concept was being dumped. It's a blur. But people were getting fired that morning and Johnny painted this picture of Nazi Germany with staffers hiding under their desks and stormtroopers marching down the hallways and cleaning out the offices. He told Hoover and me to 'do something with that.' And so we created Helmut and Wilhelm, who owned the radio stations and ruled with an iron fist. It was really more like Hogan's Heroes. Let me stress that. Helmut and Wilhelm were soulless idiots, and that's where the humor came in. For the biggest promotional error I was ever a part of, some beer company sponsor sent us in 'uniform' to some bar in Morton Grove or Skokie. No one there knew that there was a radio promotion going on. They just thought we were Nazis, and they were not happy. We drank heavily and wrapped it up quickly before the riots broke out.

Rick: Talk about fellow storm trooper Jeff Hoover. He's obviously doing great work these days working as a producer on the WGN-TV Morning News. What was it like working with that nut every single day?

Brendan: Hoover is the funniest guy I know, and by far the most talented voice actor. Tell him that we need a horny, Swedish elf and BAM! he's got the voice and he's got material. He does the legendary Jerry Lewis, from "Laaaady!" all the way to Percodan Jerry, well enough to fool other celebrities on the phone (on the air) who know the real Jerry. Working with him was a riot. I was there first, and Johnny hired Hoover a couple years later. Every day we would brainstorm bits, bounce them around and throw them back to Johnny. Hoover made my stuff better and, I hope, vice versa. We laughed a lot, and when the schrapnel was flying, we had each other's backs. It was a riot. Hoover also happens to have a heart of gold.

Rick: In ten years of working for Brandmeier you saw and did a lot of things. When you look back on those years, what are some of your favorite moments?

Brendan: Wow, there were a lot. Too too many to mention here. My favorites were probably when I cracked Johnny up. I had a bit idea where we recreated a scene from Pulp Fiction. Word for word, we recreated the "Royale with Cheese" scene with John Travolta and Samuel Jackson. Except I had Jim Volkman read Travolta's lines as Harry Caray and Hoover read Jackson's lines as Jerry Lewis. My concept, but Volkman and Hoover (and Jimmy McInerney's audio magic) made it work. Hard to explain why it's so funny unless you know the original and hear the parody. There was also a morning where Johnny's Eddie Abler interviewed a teenager who'd changed his name to Trout Fishing in America after the philosophy book. Well, "Eddie" thought the kid had named himself after a fish. The kid believed he was actually on "Eddie Abler's Good Outdoorsman Show." When "Eddie" found out it wasn't about fish, he said he oughta wrap a 50-pound line around the kid's scrotum and drag him around the lake. I happened to be in the studio with Johnny (Eddie), which was rare, and Johnny was on the ground, laughing so hard he was crying, and trying to hold down the mute button while the kid was profusely apologizing to "Eddie." 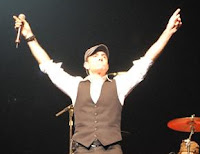 Brendan: There is none. I've seen hosts who turn it 'on' and 'off.' The energy, personality, craziness and split-second thought processes that Johnny has on the air, are exactly the same off the air. Anyone else would collapse at that pace. It's not an act.

Rick: You were with Johnny at two different radio stations (The Loop and WCKG), but when that show ended at WCKG in 2001, you decided to leave radio. Was that a hard decision for you, and do you miss it at all?

Brendan: Remember, I never had plans to get into radio in the first place. I didn't apply for the job, it came to me. And I just followed it. I had a blast but it felt like time to move on and see what else the universe had in mind. By the time I left, I was married with three sons (I now also have a daughter) and the hours and the pace were wearing on me. I thought about other shows, but frankly after the wild ride with Johnny, I also thought it would be hard to replace that experience. I still had no technical skills, didn't want to answer phones or book guests, so it wasn't like I had a lot of interesting options. I got out just before I had to show up at my kid's school for career day and tell them that Charlie's dad writes fart jokes for a living. Once in a while, like when you're asking me these questions, I miss it. But it's a lot more glamorous from the outside.

Rick: Now you're working as a creativity coach. Tell us what that is and where and how you practice this art.

Brendan: I learned a lot about collaborative creativity doing improv on stage, and creating content for radio. I also had that corporate background with the New York Times. So now I help organizational teams and leaders to be more innovative, to generate more creative ideas, and to provide a healthier, more supportive work environment where talented people can thrive. Most of my clients are Fortune 500 types (Kellogg's, PepsiCo, Bristol-Meyers Squibb, etc.) but it works with any group that wants to be more collaborative, creative, healthy and productive. Usually it takes the form of workshops, seminars and keynote speeches. It's always interactive, practical and engaging. There's more at www.creativitycoach.net. I've been doing that for about 10 years now.

Rick: And finally, of course I have to ask you about our new novel "The Living Wills". We've obviously been doing a lot of publicity together on radio and television, and at appearances around Chicagoland (including 2pm this Sunday Jan 29 at the Beverly Arts Center), and a lot of people have been asking us about the process of two people writing a novel together. For you, what was the most rewarding part of writing this novel, and what has been the most surprising part of the process?

Brendan: Well, you and I used a lot of the techniques that I learned in improv and radio and other ventures, which are the things I have also been coaching in the business world for the last 10 years. So the most satisfying thing about the novel for me is that these techniques actually work. The novel is a tangible product of these concepts I've been preaching, which I can hold in my hand as actual proof that I'm not insane. And people actually like it. The most surprising part of the process is the response we've been getting. My goal was just to hold the book in my hand. But every day now I get at least one email or phone call from someone who just finished the book, and they say gushy things about how the book affected them. I guess I'm also surprised that two guys who were known for satire, comedy writing and improv would write a novel that people are calling profound and moving. Pretty weird.
Posted by Rick Kaempfer at 6:30 AM