Rick: Did you really play a DJ in an 8th grade play, and did that really make you want to do this for a living?

Megan: I always had an interest in the media, and I was in plays because I wanted to get into show biz, but I couldn’t sing, dance or act. (laughs) So I tried out for West Side Story in 8th grade and I was assigned “Glad-Hand the DJ” role, and I thought that was a lot of fun. And I listened to WLS all the time in those days, and they made the DJ job sound so fun too. I thought, hmmm, I may just have to pursue this.

Rick: You must love this midday gig you have right now. In a lot of ways, for the life you lead outside the station—as a mom of three kids, it’s perfect, really.

Megan: You got that right. It’s absolutely perfect. I can drop them off at school, but still be home in the afternoon to monitor them doing their homework, and put out whatever fires have been started.

Rick: Which is also the typical life of the Rewind 100 demo. You are living their lives, which I think helps you be relatable to the audience. 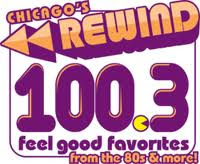 Megan: Well, thanks. Yes, I agree. It does help. And this format really does feel right to me. It’s a perfect fit. It’s the kind of stuff that I listen to myself.

Rick: I enjoy the Class Reunion lunch show you do. For those that aren’t familiar with it, what’s that all about?

Rick: Rewind 100 is a station that nobody is really talking about, but it’s quietly doing extremely well in the ratings. So well, you just got a new competitor down the dial. What do you think is the secret to your station’s success?

Megan: I think it’s really smart programming. First of all, it’s a good company. We have very smart people running the operation. They’ve been doing this a long time, and they really know what they’re doing. That’s who should get all of the credit for our success. After all, they pick the music. Plus, I think the 80s era really strikes a chord with people of a certain age. It’s just very comfortable for those of us that grew up with it.

Rick: Bonneville (owner of Rewind) really is a different animal, isn’t it? It’s not like the other radio companies. I worked for them briefly, and in a lot of ways, they were a breath of fresh air compared to the faceless corporate behemoths that own every other station. Now that a new owner (Hubbard) is taking over, have you noticed any differences?

Megan: You’re right about Bonneville. They really are great. As for the new company, I haven’t really seen any changes at all yet, and I really don’t anticipate any. Things are going pretty well right now. But to be honest, that’s sort of beyond my pay grade. I’m not in that end of the business at all.

Rick: You grew up in the area. Who were some of your radio heroes growing up?

Megan: I grew up in Batavia, and I LOVED WLS. Loved it. I listened to just about everybody at the station. Bob Sirott, John Records Landecker (photo), Tommy Edwards. You know who else I really liked was Amy Scott. I listened to her when I was in college. I went to school at Iowa State in Ames, and we could get WLS at night—and in the early to mid 80s, she was doing the night shift at the time. WLS was a clear channel station, and it came in pretty well. We listened to it when I was in working in Canada too. We could only pick up one English station and one French station during the day, but at night we could hear WLS.

Rick: Before coming to Bonneville, you worked at the Lite for many years during their heyday. How does this current experience compare to that one?

Megan: Actually in a lot of ways it was very similar. At the time I started at WLIT in 1989, it was relatively new, and it was owned by Viacom at the time, which was still run like a mom and pop organization. We had a great general manager, and a really great programmer, Mark Edwards. They really knew what they wanted to do and stuck with it. I was there for almost twelve years and I really enjoyed it.

Rick: Was it a big shock when they let you go after all those years?

Megan: They let everybody go, so no, it wasn’t a shock. But it wasn’t pleasant. That’s for sure.

Rick: They say that you aren’t really in radio until you’ve been fired at least one time.

Rick: For awhile there it really looked like the job of radio disc jockey itself was in peril. Big companies were hiring people to voice track multiple stations, and some stations tried to compete directly with iPods by going jock-less. That approach hasn’t really worked out for them. They may have saved money in the short term, but there are precious few success stories of stations that used that approach. What edge do you think a live and local jock gives a radio station?

Megan: A real live person gives a radio station warmth. That’s what it boils down to for me. It’s like the difference between calling somewhere and getting a live person instead of a recording. It really does make a difference. The entire vibe is different. You can relate to a person. It’s hard to define because it’s such an intangible. I don’t think people walk around thinking, “Oh, I like having a real person there,” but it’s more of a feeling they get.

I’ve been hearing these stories that radio is dying, or that radio isn’t any fun anymore, and that nobody cares about it, but I don’t buy that for a second. I don’t think radio is going anywhere. As for me, it’s still great fun. I think you get out of it what you put into it. It’s what you make of it, and I choose to make it as fun as I can.

Rick: Another common complaint I’ve heard from female broadcasters is that there simply aren’t a lot of women in important roles in radio. Do you agree with that, and if so, why do you think that’s the case?

Megan: I don’t know that I totally agree with that. I mean, yes, it’s a male dominated field, but I don’t necessarily think there is anything wrong with that. There’s a place for everyone. I understand some of the complaints that women have, but I also know a lot of women in the business, and a lot of them have been in it for a very long time. Including me. I’m going on twenty five years.

I’ve always struggled with this subject matter, because I understand why some women would be upset, but I think in the long run the right person gets the job—male or female. It’s different if the station is targeted to women, and doesn’t give women a voice. If there’s a station that’s targeted to men, I certainly don’t have a problem with men having those jobs.
Posted by Rick Kaempfer at 8:03 AM