Alex Quigley is the co-host of ChicagoNow Radio and Preps Plus Chicago on WGN Radio. He was also recently named the interim assistant program director.


Rick: WGN has been getting a lot of criticism lately, but I think your show (ChicagoNow Radio) is a nice addition to the Saturday lineup. For those that haven't tuned in yet, how would you describe the show?

Alex: It's a revolving door of ChicagoNow bloggers, with a new topic and new vibe every half hour. Amy and I push and pull the bloggers to get them comfortable and talking about their areas of expertise. Then we take a one-way trip to Tangentville. As long as we're talking about something that our listeners in Chicagoland find useful or entertaining, we don't mind where the conversation goes. It starts at 9am and ends at noon, save for Cubs/Blackhawks/Wildcats games that may cut us short


Rick: When I heard that you were going to host the show, I figured, OK--that makes sense. You're a writer for ChicagoNow, you've got the radio background, and you did a lot of interviews at Q-101. But this is a whole different ballgame, isn't it? How do you like the challenge of doing a full-fledged talk show?

Alex: Man, you ain't kidding. There's no rollin' in ten minutes before showtime and winging it. (Well, I guess you could, but it's glaringly obvious if you did. And bad.) I love it. I also appreciate the freedom that Dan and Kevin have given us, formatically. The challenge also is eased when you have a solid producer. Matt Mattucci and Kristin Decker both do great work for us. The show wouldn't be anything without their work.

Rick: WGN is a Chicago institution, obviously. What does it mean to you to be broadcasting from those iconic studios on Michigan Avenue?

Alex: On day number one, it was intimidating. Also, day number one happened to be the day Chicago dyed the river green for St. Patrick's Day...so the extra ten thousand people didn't help the nerves. But honestly, if I start getting wrapped up in the history of the hallowed halls...I forget about why I've got a microphone in my face. It's to relate to the millions of people who aren't here, or who may never even visit the Tower. It's about relating to them here and now in their cars, workplaces, garages, and kitchens. And in the case of one of our semi-regular callers, their bathrooms.

Rick: I met your co-host Amy Guth at one of her Reading Under the Influence events at Sheffield's (when I read--under the influence--from one of my books). She's a natural on the air. Has she done radio before this?

Alex: Jimmy Greenfield. It's all about his intuition. He knew Amy (photo) well from working together upstairs and suggested that she get a tryout alongside me. He was right. (He grows a mean playoff beard, too.) Amy's never done radio, but she's hosted some red-carpet literary events and gone on her own book tour, so she doesn't shy away from talking. We fit together very well on-air by filling each other's knowledge voids in a very complementary way. Between the two of us, we might have a trivia night dynasty in the making. I'm very impressed with the progress she's made in a mere twenty shows. Threatened, even. No seriously, she physically threatens me.

Rick: Now I see you've also added a Friday night football show to your list of duties. Tell me more about that show.

Alex: Preps Plus Chicago is our way of leveraging our excellent resources within the Tribune's Preps Plus section. They've got a fleet of reporters out across Chicagoland every Friday night; we put 'em on the air live to give their first-hand accounts of the best games on the slate. It's fast-paced, rapid-fire, instant results and analysis. (Executive producer Justin Weiner has some of the fastest dialing fingers in the radio biz.) It starts at 10:30pm every Friday night, barring any Cubs/Blackhawks/Wildcats preemption. And if the first show is any example...we'll be out of breath by 11:00:01 every Friday night this season.

Rick: You and I actually have a lot in common. For one thing, we share an alma mater (University of Illinois). For another thing, we both got our radio start there (although mine, sadly, was about fifteen years earlier). My mom hates when I say this, but I learned more valuable information from my stint at WPGU (I was the PD too--like you) than I did in my journalism classes. How did your stint at that radio station help you in your career?

Alex: You are sooooo right about WPGU. Everything I learned about radio in college I learned there, and well before the JOURN curriculum got to it in my classes. But I don't fault the University for that; I was just really, really involved in the Planet's workings from the moment I walked in the door as a 17-year-old freshman. I know you had the "old" studios in the Six-Pack, but now our location on Green Street is "old". The kids there today have it really good with their all-in-one Daily Illini / PGU combo building. Plus, it's next to Legends Bar & Grill. Whippersnappers.

On a more serious note, joining the unofficial fraternity of WPGU alums has been a lifelong comfort. Most of my best friends today are people I met there and fought alongside in the radio trenches.

Rick: You were at Q-101 off and on for most of the 00s (have we come up with a name for that decade yet)? What are some of your favorite moments from those years? 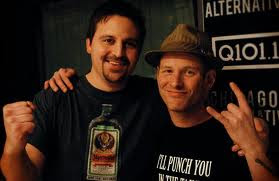 Alex: Weezerama is still my #1 memory. Sludge gave geographic clues to a secret spot in the metro where I had 500 wristbands, first 500 get in to a secret show with newly-resurgent Weezer. We were just north of where the Sears Centre is now in a dog park just off of Higgins Road. A couple minutes after the final clue was given, a small trickle of ten or so cars found us. Then...the tidal wave hit. Some five thousand listeners flooded the area. People abandoned their cars on Higgins and took off through the forest to get to us. It was a rare time when the direct impact radio has was very visible. Visible and sweaty.

More recently, I got to host Corey Taylor's station takeover (photo) and interview Kirk Hammett. Easily two of the best rock stars I ever met through the job. I'm very grateful to Marc Young for giving me the call on those.

Rick: I know you grew up in Belvidere. Who did you listen to when you were growing up? And who are your biggest radio influences?

Alex: Sports-wise, I slept with the radio under the pillow for many Bulls and Cubs games. I also remember turning down the TV for Bears games and turning up Larrivee and Arkush because they were just better than the national crew. On the FM side, the two I distinctly remember are Jeff Wicker at WZOK and Pete McMurray on WXRX. First time I met Pete in the lunchroom at Emmis, I said something to the effect of "Pete, I used to listen to you all the time when I was growing up!" He looked at me sideways...I later realized that it may have come off like I was calling him "old". Pete is not old. In fact, he's in ten times better shape than I am and could probably lift a tour bus if needed.

Rick: You're also a writer/blogger for the Tribune (ChicagoNow and the Red Eye). What do you prefer--radio or writing--and why? And which direction do you see your career heading in the future? 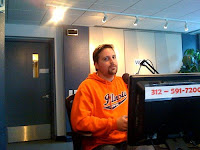 Alex: It looks like my "radio" plate will be getting a whole lot more full in the near future with the interim APD title, so I'm going to roll with that. But I fully plan on continuing to write for the RedEye and ChicagoNow. Can't hurt to expand that umbrella. As a minimum goal, I hope to not be unemployed. As a maximum goal, I want to be in the Chicago Radio Hall of Fame. I will be happy to finish somewhere in the middle ground.
Posted by Rick Kaempfer at 8:40 AM