Marty Lennartz has been with WXRT for nearly thirty years, serving in just about every capacity you can imagine. He is currently their "Creative Assistant to Programming."


Rick: I am a big fan of "The Regular Guy." It seems he has been a part of WXRT forever. What is the origin of that character?

Marty: I was producing Terri Hemmert’s morning show in 1984. At that time XRT was running a daily one minute Roger Ebert movie review/news feature. It had been on for a maybe a couple years when one day it ended without any explanation. I thought, wouldn’t it be funny if on that first morning without Roger, in his place would be just some guy reviewing a movie. So, I reviewed Mel Gibson’s remake of “Mutiny On The Bounty”. I did it in the same format as Roger’s except instead of “At The Movies”, I called it “Goin’ To The Show and I’m Just A Regular Guy” and did a little minute and a half thing. It went over well and I was told to do it again and I said, “do what again? That was it”. Who knew?

Rick: You really are a jack of all trades there at XRT--but I see your title is "Creative Assistant to Programming." What are some of your duties in that role?

Marty: Yeah, it’s a pretty cool title. I would say I’m the only person in radio with that on their business card. It’s a position that was created to free me up to be involved in a number of projects and duties. Along with Norm Winer (photo) and MD John Farneda I’m part of the three headed programming department with input into the music we add and play. I’ve learned all the programming software so I can assist John with the day to day tasks and pretty much run the department in his absence. I also bring an on-air perspective into meetings and decisions. Plus, I get many special projects, help write promos, produce the Eclectic Company, cover summer festivals, Host Studio X interview/performances. Coolest thing is I have an office. With a window.

Rick: I watched your video interviews of Terri Hemmert, and it's obvious that you consider her to be your mentor. You actually quit a full-time job to become her producer in 1981--something you call "your most irrational act." How did that come about?

Marty: I was managing a location for a local car rental and limousine company and I realized it wasn’t what I really should be doing long term, so I enrolled at Columbia College while still working the car job full time. One of my classes was Terri’s Rock and Soul Programming class and even though it was taught by a radio personality, it wasn’t a blow off course. Terri made you work. I wrote a paper and gave a presentation on soul music dancing. The Mashed Potato, The Swim, The Jerk etc. I even drew the dance steps. She really liked the paper and thought I was cool.

So, when she got the morning show, which was only supposed to a temporary thing, she needed a producer and called and asked if I’d like to get up at 4am for four weeks. Kind of a no brainer, but my four weeks at XRT keep getting extended. Yes you’re right, Terri (photo) has been my mentor for sure. Having the opportunity to be in the studio watching how Terri goes about her business both on the air and outside the station interacting with people and being involved in the community has always been a big influence on me.

Rick: What are some of your favorite moments from those days?

Marty: Walking into the studio for the first time and seeing all the albums (vinyl!) on all four walls and realizing, wow, they actually play records here. That four weeks I was talking about really did keep getting extended, but I’ll never forget that first summer at Chicagofest when the frenzy around the XRT booth made it obvious Terri was connecting with the morning show audience. Right after that, she was officially named Morning Show Host making her one of the first women to host a morning drive show anywhere. It was truly a great moment in broadcasting. Also having afternoons free to sit in the near empty bleachers at Wrigley Field to watch the Cubs finish 25 games under .500 in a strike shortened season.

Rick: WXRT has one of the most stable air-staff lineups of all time. It really is amazing. People have been on the air there for over thirty years. What is it about the XRT culture that creates such loyalty (both station to employee and employee to station)? 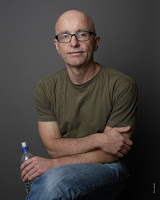 Marty: Everyone at the station is a music person. That’s why we were attracted to XRT in the first place. It’s always been about the music and the fact that, still today, the DJ’s program most of their show in real time makes it the most unique radio station in broadcasting. We couldn’t imagine working at a place with pre-programmed shows and liner cards. It’s pretty amazing when you consider that the station has been able to evolve over the decades and stay current and vital with pretty much the same cast of characters. I think we all feel that we are part of something truly special here both historically and currently. With every new artist the job becomes new again.

Rick: WXRT listeners are just as loyal. I remember when I first started at the Loop nearly twenty five years ago, I told one of my buddies to check out my show. He had been one of my best friends since childhood--and he said--"No man. I can't. I listen to XRT." He considered it cheating on his favorite radio station. XRT listeners really are that loyal, aren't they?

Marty: I know. That’s how I was before I started working here. Being an XRT listener sort of gave you a personal identity. I remember when I was at the car rental place and a customer would return a car with the radio set to XRT, I’d think, hey, that customer is pretty cool. The loyalty comes from the music first and our personal low key approach to presenting. We go out a lot too and are all pretty approachable and we’ve been around so long that listeners feel they know us.

What blows me away is the listener loyalty extends through generations. I hear all the time, “Oh yeah my mom and dad turned me onto you guys when they drove me to school”. We’re sort of like extended family members and like with any family you’re not always happy. People have opinions and criticisms of some of the things we do but they don’t totally leave. I’m glad people have beefs with us sometimes. It shows they care.

Rick: One of the perks of being a rock jock is getting tickets to see just about every important rock and roll act that ever made it through Chicago. What are a few of your favorites over the years?

Marty: That’s a very good question. I’ve been fortunate to see some of the best performances in Chicago rock history. One that comes instantly to mind is Patti Smith’s Riviera Show at an XRT Holiday Concert For The Kids where the excitement of the audience made Patti kick it into fifth gear and deliver a moving, emotional and totally rockin’show. The shows you really remember are when bands play Chicago at small venues early in their careers. U2, Talking Heads, The Police and Prince at Park West, Pearl Jam and Pumpkins at Metro and more recently MGMT at Schubas and The Arcade Fire at The Empty Bottle. It’s great to be there at the beginning.

I’ve also been able to see some great festival performances at Bonnaroo, Pitchfork and Lollapalooza and I’ll never forget Radiohead at Hutchinson Field in 2001. Also, Neil Young and Crazy Horse as a driving rain storm knocked all the power out in Tinley Park at The Horde Fest. They never stopped playing.

Rick: You're the host of The Big Beat. How would you describe that show to the uninitiated?

Marty: I call The Big Beat, “Two hours of indies, imports and music that flies under the radar of the mainstream”. It’s XRT’s underground indie showcase, although today the boundaries of what that means are more obscured than ever. The Big Beat is one of the longest running shows on XRT. Hosted by Bobby Skafish in the 70’s and Johnny Mars in the 80’s and 90’s, the show introduced Chicago listeners to punk, new wave, college and alternative rock. Almost every significant modern artist of the past 30 years has been introduced to Chicago listeners on the show.

I was fortunate to start my tenure at the time of the indie rock explosion of the past 10 years. There is so much music in so many different genres with more ways to hear this music than ever before. I try to round up the best and present it in an informative and entertaining way. Hosting the show and trying to stay current is almost a full time job in itself.

Rick: You've also been a full time jock on the air, and filled in on virtually every shift, in every daypart. What are a few of your favorite on air moments?

Marty: I guess I have worked pretty much every shift. I sometimes feel like Mark DeRosa when he was on the Cubs. But I have to say most of the memorable on air moments have been from festivals and interviews. Over the past few years I’ve had the chance to meet and talk with Tom Yorke from Radiohead, Jack White, Eric Clapton, Elvis Costello and Wayne Coyne of The Flaming Lips. In December I interviewed Wayne before XRT’s Big Holiday Concert while we were both wearing yeti costumes (photo). That was fun. And warm.

Also being the producer of The Eclectic Company has given me the opportunity to meet and hang out with artists in ways I never would too. Just sitting around playing and talking about records with the likes of John Doe, Robyn Hitchcock, Beck, Graham Parker and hundreds of others while also becoming good friends with hosts Jon Langford and Nick Tremulis has been really great and rewarding.

Marty: Other than say, “30 years? Are you sure? Check your math” probably not too much. Hemmert has anniversaries copyrighted around here.
Posted by Rick Kaempfer at 10:26 AM