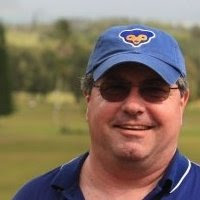 Bernie Tafoya has been the ace reporter at WBBM-News Radio 780 for the past 22 years, and part of the Chicago radio landscape for more than 30 years.


Rick: I always thought you had one of the most interesting jobs in the business, because you aren’t tied to a radio studio.

Bernie: I think so too, I love it. I can do my reports from anywhere. I love being on the street.

Rick: And with the technological advances recently you don’t have to come in at all.

Bernie: That’s true. The only time I really come into the station is to turn in my expense reports. (laughs) I have a small digital recorder about 7 inches by 4 inches that has a mic input, a phone jack, and a USB port. I can record phone interviews or on the street interviews with this thing. I can upload the audio into the computer, edit it, and send it wirelessly into the newsroom. The quality is fantastic, and it really does give you incredible flexibility to cover all sorts of different things.

Rick: I think that all-news radio serves an important role. My fear is that it’s an expensive format to keep on the air, and that the bosses will think that they can cut back on reporting. Without people like you on the street, however, the format becomes nothing more than an audio version of reading the newswire. Do you think the people that run radio understand that?

Bernie: I think they do understand that, especially at BBM. To be honest, when you add in the people we have full time and part time now, I’d say we’re not quite where we were at one time, but we’re pretty close. When a big story breaks, we don’t have use smoke and mirrors to cover it. We can throw all sorts of people onto the story to cover every angle, and experienced reporters, too. I like to joke that even though I’ve been at BBM for 22 years, I’m still only like the middle guy on the totem pole. John Cody has been here 40 years.

Rick: Describe a typical work day for you at WBBM News Radio 780.

The great thing about radio news is that the reporters don’t just cover one story a day like the TV people do—sometimes we do 2, 3, or 4 stories in a day, and many different versions of those too.

This morning I interviewed a money magazine editor and used it as a feature story, in addition covering the swine flu story. Yesterday I was with Mayor Daley and the Mayor of Bogota Columbia, which was just named our sister city, but I was also at the school in Rogers Park talking to the people there about the swine flu when that story broke.

I started this shift in August of 2000, and it used to be a cops and robbers beat, but very early on my news director decided to use me in a different way. She knew I had sources in all sorts of other areas, like in education or the church, and she let me cultivate those sources and use them. Plus, the main spokespeople of the various different agencies all knew me. I was very happy to be given that role, because the old cops and robbers stuff wouldn’t have interested me nearly as much.

Rick: But you probably have seen quite a bit of the cops and robbers stuff. I’m guessing you’ve seen some things that most of us will never see. Are there any stories that have even shocked the hard-bitten reporter in you?

Rick: Does it help that you grew up in a tough neighborhood yourself?

Bernie: Yes, I suppose it does. I grew up in the CHA projects, but there wasn’t really gunfire at that time, it was more with bats and chains, not that that is much better. To be truthful you do get some street smarts growing up in neighborhoods like that. I’m glad my kids never had to grow up with that—they grew up in the Beverly neighborhood.

Rick: So you’ve never had one of those moments... 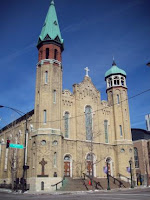 Bernie: Well I wouldn’t say that. I’ll give you an example. On 9/11 when the Towers were hit, I was sitting in Dominick’s parking lot in the South Loop and I was listening to BBM. As soon as I heard what was happening, I went rolling to the Sears Tower, and started interviewing people there. I spent most of the day down there, and in the Loop, but then I went to Old St. Pats to talk to people who were looking for a way to find comfort during that difficult time. After I finished reporting, I joined them myself and prayed.

Rick: You’ve also covered some of Chicago’s most historical events. Do you have any favorites? 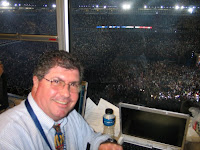 Bernie: Most recently, I’d have to say the Barack Obama 2008 Presidential election. Reporters have been given a lot of grief about being too pro-Obama, but I wasn’t reporting that story from a pro or anti point of view. It was history. I love history and I was so taken at being in Denver at the convention to witness all that (Photo). I didn’t revel in it as anything more than being an observer to history.

On election day, I was there when he voted for himself for President. That was a big moment too.

Rick: You’ve covered all of Chicago’s mayors since...

Bernie: Michael Bilandic. I use that loosely, though, because I was only a desk assistant at WIND when Bilandic was mayor, and I was really only sent over with a tape recorder a few times. But I’ve legitimately been at City Hall since Jane Byrne (photo) was Mayor. In fact, Mayor Byrne indirectly got me a job with WCLR, because she was so interesting and bound to say absolutely anything that they decided they needed a news staff to cover her so they wouldn’t miss the audio.

Rick: Do you have a favorite Mayor?

Bernie: All of the mayors were unique. Jane was always good for a story. Harold was so eloquent and had a great sense of humor. He was also the one who started the practice of coming into the press room to chit chat with reporters. Mayor Daley does that too sometimes as an off-record kind of thing.

One time I brought my son to work to see what Dad does. He was something like 5-years-old at the time, and Mayor Washington said a few very nice things to him—I have the audio somewhere of that. Mayor Daley can be entertaining too. He has a funny way of saying things.

Rick: You grew up in Chicago listening to Chicago radio. Who were some of the people you listened to that shaped the kind of reporter you became? 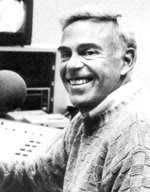 Bernie: To be honest I didn’t really listen to news radio, I listened to talk radio and music. I loved Dave Baum (photo) at WIND. And in a weird twist of fate, that ended up being the first place I worked in Chicago. I eventually became his producer, and that was quite a thrill for me.

Rick: You’ve received just about every award in the book: Best Reporter awards from the Associated Press and United Press International, Peter Lisagor Awards from the Chicago Headline Club, and an Edward R. Murrow Award, and a Boyden Award from the Chicago Journalists Association. I’m probably missing a few. Is there any one thing you’ve done professionally that you’re most proud of?

Bernie: I like the awards we won as a group, because we’re a team, but as far as the individual awards, I’m probably proudest of the four best reporter awards from AP, and the three second place finishes. Those are for a collection of your work instead of just one story. They mean you can do a variety of different things, and do them well. Those probably mean the most.

Rick: You have the same disease I have, and I’m not talking about swine flu—although it also doesn’t have a cure. You’re a Cubs fan. Have you ever wandered into the sports reporting arena?

Bernie: Not per se. At WCLR, one of my duties was not only to cover City Hall by day, I also had to cover Depaul basketball (in the Mark Aguirre days) and Michael Jordan in his first few seasons with the Bulls at night. That was pretty cool.

I never actually covered the Cubs themselves, but I was sent to cover the story in a news-related way in 2003 during the playoffs, getting fan reactions, and that sort of thing. I went to both Atlanta and Florida for those playoff series. Also, I went to the Rose Bowl to cover Northwestern. We carried them at the time, so I was sent out to Pasadena. Those are fun stories to cover.

Rick: One final question. I’ve listened to your reports for years, and I’ve never heard even the slightest trace of political bias. As someone who has worked in newsrooms for decades, do you think the media is biased or not? 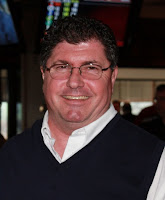 Bernie: I think we all have views, but for all the reporters I know in this town, I don’t see it when it comes time to work. We may josh with each other because we’re notorious kidders, but when it comes time to put it on the page or on the air, we’re very serious about being as fair as we can be. We all have our own perspective, based on our backgrounds and our beliefs, and sure, that may shape us to a certain extent. Someone from Kenilworth, for instance, might have a different view than someone like me who grew up in the projects, but I know that everyone I’ve ever seen doing this job, tries their darndest to be fair, and most importantly, get the story right.

Rick: And you love this job don’t you?

Bernie: I do, but you know what is more important? I always considered being a dad my #1 job. My youngest is in college now, and all three of my kids have turned out to be good people. That’s my proudest accomplishment.
Posted by Rick Kaempfer at 9:02 AM