Barry James is the program director of WILV, 100.3 FM. Before coming to WILV, he was the PD and the station manager at the Mix, WTMX.

Rick: When I asked you to do this interview, you jokingly called yourself "one of the geezer program directors." Of course, in order to program radio stations for a long time, you have to amass a successful track record. What does the current day Barry James know that he wishes he could have told the Barry James who came to program WTMX back in 1993?

Barry: I continue to learn every day, so I can't say there is one parcel of knowledge that I'd wish to impart. Drew Horowitz (photo), my GM at The Mix, told me that I had to "experience the four seasons" to get what was going on here. He wasn't talking about Vivaldi and he was right. Almost everything that I'd learned to be true about programming up to the time I came here in May of '93 would need to be looked at differently. Things that had worked for me in the past either didn't, or needed to be greatly modified to work here. From this experience, I developed my own mantra. I shared it with Mary Ellen Kachinske during her first few months when she joined me. It was simply "It's bigger than that". We look at our past successes and think they'll make the transition. Rarely are things that cut and dried. I still use the "It's bigger than that" test to make sure I really think things through- at a market #3 level. Geezer. Hmmm. Perhaps I misspoke.

Rick: A few years ago you switched over to program WILV. I know the studios are in the same hallway as WTMX, so it wasn't a big change physically. How much of a change was it for you musically?

Barry: Just as we had to consider Chicago's rich radio history when we were building The Mix, we had to think about the music to which today's 40 year old was exposed in their past. So, WILV's recipe certainly isn't one that would necessarily work elsewhere. Greg Solk and I have seen that for years when people have tried to copy The Mix or The Drive in other markets.

Rick: WILV's current roster of air talent includes admired veteran Chicago music jocks like Brian Peck, Megan Reed, and Brian Middleton, but you recently let Tommy Edwards go. Did that signal a change in direction for the station? I notice you're not calling yourselves Love-FM anymore.

Barry: Let's start with the Love moniker. Our Arbitron performance proves that when people sample us, they like us. We're top 5 in prime among 25-54 females. In the last 3-month average, Peck was 7th, Meg 2nd and Middleton 5th. PPM vs diary performance proved what we thought may have been true. Since the station made a transition to its current music mix a couple of years ago, we didn't want people to get the wrong idea about who we are and what we do. In a PPM world, it's the "address" that means the most for a radio station. Thus, Chicago's 100.3.

As for Tommy, his contract was up and we simply chose not to re-sign. No directional change. Tommy and I are friends and don't be surprised when you hear him soon on a radio station near you (and very near me).

Rick: Has the entry of Fresh-FM into the market affected your approach at all?

Rick: As I mentioned earlier, you were at the Mix for many years before you switched over to WILV. About a half-dozen or so people can legitimately take some credit for the success of Eric and Kathy, and I think it's fair to say that you would be one of them. You were the program director who put them together in the first place. What was your thinking about that back in the day, and why do you think they have become so successful? 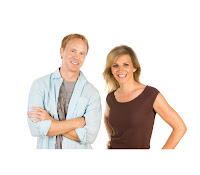 Barry: A half-dozen people can take some credit for Eric & Kathy? So, that's where my share of the kitty went! I was their PD or Station Manager for their first 8 or so years. I've been asked a number of times about their success. My answer remains true to this day; they are where they are first and foremost because of their talent. My part in the process was to (a) identify talent, (b) nurture that talent through support and guidance and (c) step back and watch it grow. "C" is the hard part. Most program directors can't do that. It was the most difficult aspect of the process, but the one that reaped the greatest rewards. I work with the talent on WILV in the same way. I guide them to their own answers. I don't want to build talent in my "image" because frankly I wasn't all that good on the air.

Rick: Do you have any favorite memories from your days at the Mix?

Barry: My favorite memory from The Mix is one that isn't directly tied to the on-air product. We use a facilitator to work with our strategic teams at Bonneville Chicago and during a session some years ago we discussed some pending changes. Drew Horowitz was taking a broader role in the company and I was upped to Station Manger. The facilitator said that it was a critical time for the station, the market and the impact we have on Bonneville overall. He warned us of the problems that could occur with these levels of transition. Over the next few years, we continued to grow The Mix, both on the ratings and revenue side, and Drew's contributions made Bonneville Chicago a stronger entity. I'm extremely proud to have been an integral part of that team's success.

Rick: I don't know if you remember this, but when you first started at the Mix I was writing a column for a magazine called "Chicago Advertising & Media." I wrote a column that was critical of the many changes that had been happening at the station (most before you started, but a few after you arrived), and you sent me a pretty scathing letter, complete with facts and figures to dispute my assertions (I saved that letter. It's in one of my old scrapbooks). I don't remember what I wrote, but I do remember that letter and your follow up phone call. I think it's safe to say you're very passionate about what you do. Do you still handle your day-to-day duties with that same kind of intensity, or have you mellowed over the years?

Barry: Just as passionate? Absolutely. Intense? Absolutely. Mellowed? Well, sure. In the past 15 years or so I've found better ways to get a point across.
If it was "scathing" then I was less than unprofessional and for that I apologize.

Barry: Was I right?

Rick: To tell you the truth, I don't remember. I'll have to go look.

Barry: We'll have to have lunch someday and look over those notes. My guess is that we were likely both correct to some degree.

Rick: You've been in this market now for more than 15 years and radio has changed quite a bit in that time. How would you assess the changes to the business and the Chicago market, and what do you think about radio's future? Do you have any words of encouragement for those who are worried?

Barry: In my opinion, the changes in our business parallel those of the economy. I'm not simply referring to the revenue side of the picture, but more globally. The economy took most people by surprise. Oddly, so have the sweeping firings and "right-sizing" efforts of many companies. We allowed ourselves to be lulled into a sense of security and assumed prosperity that simply wasn't realistic over the long haul. As devastating as it is at present, from these times will rise a new period of growth. BUT, we can't allow ourselves to believe for one second that we'll be able throw a bandage on this and it will all be OK. It won't. It requires a completely new way of thinking and it starts with the reasons why people use radio in the first place.

If you identify a problem, and you solve that problem, your talent or service will find a place to flourish. We've had decades of talent, goods and services that solved no problems. Those are going away. We are entering a period where "what I want" is eclipsed by "what I need".

Radio needs to solve problems. If there isn't one that's apparent, find one. Then solve it.

To people that are worried about their futures....it's not just the young ones looking to get in, or the old ones looking to get out. It's everyone. Channel that worry into thinking. Look around you. What are people doing differently today that they didn't do a year ago? Do their actions present an opportunity for you? Spend time talking to people outside of your business. Go beyond the obvious.
Posted by Rick Kaempfer at 10:30 AM