Jim McInerney is the production director at WERV.


Rick: When I first met you in the early 90s, you were an intern with the Kevin Matthews show on the Loop. It was easy to tell which interns were going to make it in the business, and which interns weren't. You were one of those guys that did whatever you were asked whenever you were asked--from running the board on the Howard Stern show, to working with Kevin, and then eventually with Brandmeier. Talk about those early days and describe a typical day before Johnny hired you to come aboard his show full-time.

Jim: Something that made The Loop really cool back then was the camaraderie. There was a large group or us working there and we got to know each other really well. We all were working for the biggest names in the biz back then, and we were all very aware of it. I think we were really into what we were doing. It was very creative, and competitive. I worked on just about every show at The Loop during this time. It wasn’t uncommon for me to actually have my pillow with me because I was spending more time at the studio than at home! The demands and deadlines were always really tight, as is the nature of talk radio. It was a crazy time. We would almost come to blows over studio time…Then we would all go out to Flapjaws on Pearson for beer. Talent, management, producers, interns…We all would hang out, and sometimes even travel together. Whenever I see anyone from the old Loop, I feel like it’s a family reunion.

As for a typical day at The Loop in the early ‘90s…Was there such a thing????

Rick: You worked with Johnny B at two different radio stations (WLUP, WCKG), and I know you still have fondness for him. Everyone I know who has ever worked for him is still fiercely loyal. Why do you think that is, and how would you describe the experience of working for Brandmeier?

Jim: Johnny is a very straight up kinda guy. Always on the level. I loved the experience of working with Johnny (photo). I was an energetic and enthusiastic young dude and he was this super-intense, creative, motivated talent who just blew me away! He was an awesome role model for me because he knew how to focus his energy in a way I had never seen before – Deadly accurate. Plus, I was cocky as hell and he really knew how to put me in my place sometimes. Back in my 20s, I needed that guidance and he really was the older brother I never had. I think we clicked well, I worked with him for a long time and I even liked the whole LA to Chicago to LA arrangement. It was pretty wild and sometimes it frayed my nerves but I loved it!

Rick: It's difficult to sum up a decade, but what are a few of your favorite memories during the Brandmeier years?

Jim: We made a few trips to Upper Wisconsin to blow off some steam and those were really wild times! There were some other trips we made – Munich, Germany being a biggie - and big events like Loopstock in ’96, but nothing can compare with my memories of those trips to Wisconsin. Cold brew, pontoon boats, Wave-Runners, and a 12-gauge or two. I hung out with his dad and some other characters from his Wisconsin roots. We even dragged Piranha Man up there once! Talk about a walleye outta the water!!!

We did some wild stuff on the show as well and I felt we were really pushing the envelope with some of the audio production. We did some great phone scams. One time, I had a girl totally believing I was Jimmy Page! I created a ton of “Wacky Mac Edits” in which I would take sound-bytes of politicians, actors, whoever…And edit it waaaaay out of context. I loved putting those together. Back then, there was no internet or YouTube to find sounds. It was all done by creating your own collections. If you wanted audio from “Goodfellas” for example, you would have to get it from the film itself. In those days, I couldn’t just sit and watch a movie or tv. I was constantly stopping and starting it to grab sounds. And, I was babysitting about a hundred VCRs! But it was a blast and Johnny would always push me to do more.

Rick: You started as an intern for Kevin Matthews, and then when he came to WCKG, you produced his show there. I've worked with a Kevin a little bit (I still appear on his show occasionally in Grand Rapids to talk about my Cubs website www.justonebadcentury.com). You just never know where he's going to go next, or which character is going to talk to you. I've always said that in order to produce a show you have to be able to get into the head of the host so you can anticipate what he or she will need next. That must have been impossible with Kevin. Am I right or wrong?

Jim: I was always very much a fan of The Loop for music but when I returned home from college one summer, a friend recommended I listen to Kev (photo) because “he did a lot of funny Chicago shit...A lot of inside stuff”. I finally flipped over to AM1000 and sure enough, the guy was doing a lot of funny, inside-Chicago humor, but it was the crew of characters and bits that sucked me in. I was a big time Kev Head and I wanted to come to The Loop because of him. I got my foot in the door as a music intern, filing away the vinyl. It didn’t take me long to find my way around the station and talk my way onto his show staff. Fun times. His show was so spontaneous and you never knew which direction he would go in. Ideas would hit him at lightning speed and voices would start flying outta him like a possessed man. Quite honestly, Kevin doesn’t need a producer…He needs an exorcist.

Rick: In my book, "The Radio Producer's Handbook," I used you as an example of someone who took his producing career in a slightly different direction. How did you take that first step from producing to production director?

Jim: My home was always in the production studio. That is where I knew I could make my best contributions. The show producing stuff just came along the way. I do enjoy producing shows but my passion is audio production and that is what I do. So to become a Production Director was a very natural transition for me to make.

Rick: Congrats on your new gig at the River, by the way. How did that come about, and what are your duties there?

Jim: Thanks, Rick! The timing worked out perfectly and I was in the right place at the right time. I was talking to some good people at Next Media and they recommended me to Matt DuBiel (photo). The River was looking for a new Production Director because their current guy was being promoted. I knew Matt when he was an up-and-coming intern on The Wendy and Bill Show. I used to tell Wendy that I thought he was a sharp dude and now he’s my boss!!! The whole crew over at The River is great and I feel very comfortable there.

Rick: You're a huge Star Wars fan--and you produce and co-host a Star Wars podcast called "The Force Cast." Tell everyone where you are going this week and why. 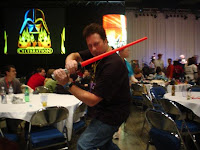 Jim: I’m a totally outta the closet Star Wars fan! I’ve done various Star Wars coverage for every show I’ve worked on. I’m rather notorious for my fandom, I guess. In 2005, I produced The Star Wars Radio Special for WCKG to hype up the release of the final Star Wars film. Just a fun hour-long show featuring my interviews with many of the actors in the films. I really enjoyed producing that show and I wanted to do more stuff like that but there was really no mainstream outlet for me. The Force-Cast is the official podcast of the top Star Wars websites TheForce.Net and Rebelscum.com. I hooked up with the crew of that show in late 2006 when the show was just getting off the ground and I was recruited to join the staff. Things have really taken off since then and we now average over 50,000 downloads a month. (visit www.TheForce.Net/Podcast)

Tomorrow, I board a plane for Tokyo to cover Lucasfilm’s Star Wars Celebration Japan for The Force-Cast. It’s the thirtieth anniversary of the original film over there and it should be a wild time. The cool thing about podcasting is that I can take two of my passions - Star Wars and audio production - and combine them!

Rick: I know one of the highlights of your radio career was meeting your lovely wife Wendy Snyder. Tell the story of how you two met. 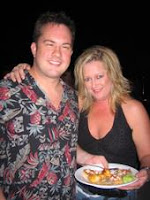 Jim: I remember the first time I met Wendy. I was in the infamous “Jock Lounge” at The Loop in the Hancock building. I was hanging with Stan Lawrence and some other guys when Wendy walked in. Stan said something along the lines of “Hey China White, you and Jimmy Mac need to throw down on the flip, flop and fly.” Or something like that. It was a cool introduction to the future mother of my children.

Funny thing about dating a co-worker is when you decide to go public with your relationship. You worry so much about how people will react. But in our situation, everyone was like “Yeah, of course!”

Rick: At one point you were even producing her show (The Buzz and Wendy show on WCKG). What was that like producing your wife's show?

Jim: Again, it all seemed very natural. I like working with Wendy on radio stuff. She’s passionate and she knows what she wants. But, she listens to me and I listen to her and we make a great team. That being said, there were occasionally “those days” here and there. I won’t lie to you. Sometimes our family lives would intrude on our work lives a little too much. I believe it’s what George Costanza would refer to as “worlds colliding”. But we both really loved working on that show with Buzz because he is our idol, our mentor, and our personal restaurant critic. That was a true radio family experience, but this time, our radio family extended to thousands of listeners!

Rick: Last question. I know you're a huge White Sox fan. Are they going to win it all again this year?

Jim: Let me put it to you this way. I got my walkin’ shoes for the parade ready to go!!!
Posted by Rick Kaempfer at 1:30 AM