Tony Lossano is the co-host of the television show "Nude Hippo: Your Chicago Show" and the producer of the Melissa Forman show on WLIT-FM.

Rick: Before we get to your radio career, your TV show "Nude Hippo" recently celebrated it's 10th anniversary. Talk about what inspired you to start that show.

Tony: Actually we just turned 11 on May 3rd, but that had no hoopla. The 10th anniversary was the big celebration. We even got our first Emmy nomination for that...though we really didn't submit any shows for consideration prior to that. -- Anyway, it all started back when I realized that there was very little local programming out there anymore. I grew up on Gigglesnort, Bozo, Family Classics, etc. 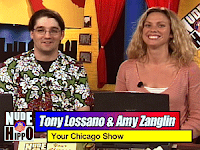 So when I started NUDE HIPPO, the only other local shows were Svengoolie (which I grew up on), Wild Chicago and the Illinois State Lottery Drawing. All great shows, but there was nothing like the amount of shows that I remembered. NUDE HIPPO started more like a sketch variety show and has transformed into an offbeat magazine style talk show. Now there are so many copycats out there doing almost exactly the same things that we have done. However, we still have the most creative team that keeps us in front.

Rick: Every time I interview someone for this blog I do a video search to see if there is anything out there. Inevitably, they have already been on Nude Hippo. Who are some of your favorite interview subjects from radio (and why), and is there anyone on the air that you still need to cross off the list?

Tony: I admire John Records Landecker (photo) He was always great to work with. He even became our movie critic for two years before taking it to WTTW-TV. Jonathon Brandmeier has been tops in my books since he started but I have only gotten to do one quick bit with him at a LOOP event. I would really like to do something fun with him. Steve Dahl was another one I have always enjoyed and the support he gave us was amazing. Everytime he talked to us or about us on the air was pure gold. I would love to do more with him but believe that we have gotten more than our fair share. I got to do 30 minutes in our studio with Eric & Kathy and I believe that was the most in-depth interview that they ever did. 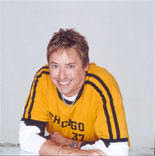 Also, Ramblin' Ray was just plain nuts and fun and I would like to do more with him, Steve Cochran is hilarious, Jim Johnson is the only one I know who can make my sides split, DreX (photo) is so quick on his feet and should be doing more, Garry Meier was very dry in a funny way, Eddie & JoBo were so down-to-Earth, Mike North is a great guy and has been a longtime friend from the days before either of us were in radio...

But I met a couple of my best pals in the world by doing NUDE HIPPO, Melissa Forman & Jimmy Gronemann. Jimmy started on my TV crew and became a very good friend, he then later got a gig on Melissa's radio show and I brought her on my show as a guest co-host and we all have been together ever since.

Rick: Nude Hippo is now part of the NBC family. For people that don't know, talk about where and when they can see the show now.

Tony: It is always changing and we're always on. We were on cable for a decade and for the last 3 years we have been on NBC5.com as well. There are several things that we are working on. I along with my business partner, the great and wonderful Mariana Perin, have been working on some things that we feel have not been done yet...So there is more to come. For right now, just go to NudeHippo.tv and you'll get all that you need.

Rick: Your day job is producer of the Melissa Forman show on WLIT. I've interviewed Melissa a few times and she seems to be just about the nicest person in the biz. Tell us about Melissa's dark side. 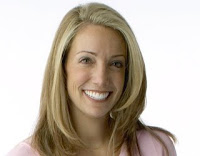 Tony: Well you know there is no way that somebody can be that nice all of the time...but she really is! Melissa is an amazing Mom and a super talented radio personality...but when those mics go off, she is so unbelievable. After each show, she meets with the entire crew, not just from our show, but other shows too, and sales, promotion, engineering, etc. and she gives them a pep talk...it is like this motivational speaking event with 30 minutes of yoga...she then takes all of us out for brunch...everyday.

Not everyone appreciates all the good that Melissa does...which is why occasionally she will have one of the interns killed to help get her point across, but those are the sacrifices that are expected if you want to make a difference in this business.

Rick: You've been with her show now for many years. How has your role on the show evolved?

Tony: Nine years, three stations two tour of duties. I started with her at the suburban KISS-FM, then Energy-FM, both as her Webmaster and occasional on-air stooge. Soon thereafter, Melissa was offered a gig at The Lite. She took it, Jimmy Gronemann (one of her producers at the time) and I came with her. I remained the Webmaster for MelissaForman.com and became the Assistant Morning Show Producer, plus I worked with the WLIT Promotions team and become the Webmaster for WLIT.com.

Within a couple of years, I left the show for a couple years to focus on NUDE HIPPO, but always helped Melissa & Jimmy whenever I could. About four years ago, I came back, and took on my old role...It wasn't until 6 months later that all of us except newsman Rick Zurick (Photo: Melissa, Jimmy Gronemann, Rick Zurick and Tony) was let go to make room for a syndicated radio show with Whoopi Goldberg. A week into that, I was offered the Producer gig. I took it. 14 months later, they brought back Melissa to mornings and I remained as the Producer and Jimmy was brought back as an on-air foil to Melissa and became the second Producer. No matter who does what, we are all just happy to be together with Melissa doing a great show again!

Rick: The morning radio market in Chicago may be the most competitive in the country. Every time I see the top ten listed in Robert Feder's column, I think of the many great shows that aren't even mentioned. What do you do at the Melissa Forman show to set yourself apart from the rest of the shows out there?

Tony: The ability that Melissa has to connect with her listeners is amazing. She is so natural at making any topic interesting and funny. The way that Jimmy, Rick and myself all click with her is a perfect blend. How many radio shows can you name that are lead by such a talented woman surrounded by strong men? 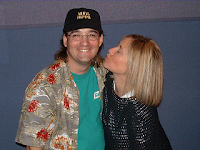 I'm used to being the one in charge and in the spotlight with NUDE HIPPO, but my true love is producing and it is so refreshing to get out of the spotlight and have it focus on someone who is so good at what she does. There are very few individuals who I would ever want to work with and I've been lucky enough to be in the position to pick and choose...and I'm happy to be with Melissa on such a refreshing, real and fun show. (Photo: Tony with Maureen McCormick)

Tony: Know the evolving business. Be prepared to understand that this is a business and the more that you can do, the more value you have. Though it is a very tough business. I've been lucky. Even though I am with WLIT and NBC, I have the freedom with NUDE HIPPO to cover events and personalities from any of the other TV & radio stations. I have seen the inner workings of those places. 'They ain't no different over by there.' Be passionate, be well rounded, get educated beyond just from broadcasting classes...you have to know about the world and how it works to succeed. Finally, enjoy living...you will need to pull from your personal experiences to give yourself that something special that will connect you with listeners. This is for both potential on-air talent and producers.

Rick: Which direction do you see your career heading from here--do you see yourself in radio or television or both a few years down the road?

Tony: I know that I can do anything that I want and I am sure that I will still being doing both TV & radio and don't under estimate this interweb thing...it's not just a fad. I really enjoy doing this and the people I work with are amazing. They have helped me change my life.
Posted by Rick Kaempfer at 12:16 AM