Steve Downes is the morning man at WDRV-Chicago, and the voice of Master Chief in the X-box video game series "Halo"

Rick: I think you came to the attention of Chicagoans through your work with national specials like "The Superstar Concert Series," and of course Rockline. When you were hosting Rockline in the 90s nearly all the rock and roll greats did that show. What are some of the highlights from your perspective?

Steve: So Many. Probably the biggest thrills we're hosting the first national radio interviews of the reunited Eagles, and Jimmy Page and Robert Plant.

Rick: Everyone likes to hear about the highlights, but as a former radio producer, I also like to hear the nightmare stories. Who were some of the guests you had on Rockline that either a) were a pain in the butt b) were like talking to a brick wall, or c) made no sense at all?

Steve: The biggest fear was being skewered by Howard Stern live and nationwide, when we had him on ROCKLINE after the publication of his first book. (Didn't happen. He was very cool, and very entertaining). The vast majority of artists were very cool. The ones that weren't were usually too buzzed to know what was going on. Scott Wieland was barely conscious for 85 of the 90 minutes we were on the air, until at the very end, he spontaneously broke in to a killer version of "Give Peace a Chance" . 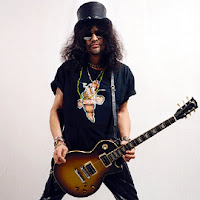 The one I'll never forget is the night Slash (photo) was in the studio. During one of the breaks, my producer informed me that our first call out of the break would be from Paul Stanley of KISS, to plug his appearance on the show, the following week. Off mic (supposedly) Slash proceeded to tell me how much he disliked Paul, questioned his sexual orientation, and various other derogatory comments. What we did not know, was that the producer had accidently put Paul's call in to the studio, and he was listening to our entire conversation! Stanley made mention of that when we put him on the air live and nationwide!!. Slash, who by now was pretty stoned, literally fell off his chair! I was watching my career flash before my eyes (complete with THE END credits). To his credit, Paul could not have been cooler about the episode and laughed the whole thing off. Very classy guy.

Rick: You've been with the Drive since it signed on the air. Did you feel like you were taking a risk when you signed on to this unknown format?

Steve: I was doing mornings at The LOOP at the time, and I was concerned about coming over to a brand new station and an untried format. It had taken me 3 years to get a toe hold in this market and I was hesitant to leave The LOOP which was doing well at the time. But after lengthy conversations with Greg Solk, it began to make sense that this was where my future was in Chicago radio. I had (and have) a strong belief in Greg's vision, and it really seemed like a logical move to make. And at the end of the day, I liked the format!

Rick: Anyone who listens to your show knows that you have an incredible reservoir of musical knowledge--and that obviously comes from so many years in the rock radio business. But there is also a passion for the music that comes through when you talk about it. What artist or artists were are THE ones for you...the ones that got you into this in the first place?

Steve: Obviously Elvis, The Beatles and Stones were the artists who changed my life. I think when the progressive scene started to rev up in the late 60's, and I began to hear artists like The Doors, The Airplane, Jethro Tull, and Led Zeppelin being played on stations like WCOL-FM in Columbus, and WEBN in Cincinnati was when I really started to see a career in this. And if I couldn't make a living playing this music (I played guitar and drums in bands, through high school and college), then playing this music on the radio was the next best thing. And the laid back style of free form radio was something I could definitely see myself doing.

Rick: In addition to hosting the morning show on the Drive, you also have a couple of syndicated shows, including "The Classics," which airs on Sunday nights here in Chicago. But I wanted to ask you about your other syndicated feature..."The Wine Experience." How did that feature come about?

Steve: The Wine Experience is a daily one minute feature on wine "without the snooty attitude." It runs on most major markets throughout the country although sadly, not in Chicago. It's written and produced by Ken Ohr, a very dear friend of mine, and wine aficionado. You can hear the shows and find out all kinds of great things about wine at www.wineexperience.com. Next to music and golf, wine is my favorite hobby!

Rick: I bet this is the first interview you've done in a long time that didn't start with a question about the voice you do for the Halo video game series for X-box. For people who don't know, you're the voice of Master Chief Petty Officer John 117. It must be odd; there are obviously thousands of radio fans who listen to you every day, but there are millions of fans of the video game. What has that experience been like for you?

Steve: This is probably the first interview I've done in the last five years that did not start with questions regarding HALO. It is a bit of a double life between Master Chief (photo) and the morning show, because the two don't really intersect. Being the voice of Master Chief has been and continues to be a blast. The fan base is enormous, and I hear from people all over the world.

Rick: You've been a voice actor for many years now. What are some of the major advertising campaigns that people may have heard here in Chicago?

Steve: Things are kind of quiet now, but I just finished a 3 year run as the voice of Carnival Cruise Lines. I've had major campaigns with Quizno's, Maytag, Chesapeake Energy, Yamaha motorcycles and The IL lottery, among others. I also narrate a number of shows that air on The Discovery Ch. during "Shark Week"

Rick: So, of all these jobs you've had, which is your favorite?

Steve: The one I'm doing right now!
Posted by Rick Kaempfer at 9:17 PM