1975, WLTD, Evanston (I was Chuck Schaden's engineer and got to read the weather on his original "Those Were The Days" show.)

1976, WMRO/WAUR, Aurora (a west suburban version of WGN and an automated FM station where I recorded voice tracks that were always out of sequence with the songs.)

1980, WCFL, Chicago (Evenings. For a Chicago kid, one of my boyhood dreams come true. I was a pimply-faced dork who used to hang out in the viewing room watching the jocks do their shows through the narrow windows at their Marina City studios.)

1991-Present, WGN-TV Chicago/National (Staff announcer, Illinois Lottery Talent, in 1999 brought on to “WGN News at Noon” and then “WGN Morning News” as an entertainment critic/reporter)


Rick: My first question is, I think, an obvious one. You work on WGN Morning News on television, you do production at WGN radio during the day, you appear on Steve Cochran's afternoon show on WGN, and you have to go out at night to cover events as an entertainment reporter. When and where do you sleep?

Dean: And don't forget the interviews and screenings during the day and the weekend press junkets. If you've ever seen me in a restaurant after a nice meal or in a really dull movie, you know where I get my sleep. I guess you really have to love what you do to keep this pace. It is pretty busy but most days are fun. Thank goodness we have great makeup people and barrels of concealer.


Rick: I saw that the New York Times called you "Tribune Company's Man of Many Hats." Which of those hats is your favorite one to wear?

Dean: Like Dorothy Tillman, I love my hats for a variety of reasons. The "radio hat" allows me to dig into subjects with some depth. WGN is unique in that we have a lot of freedom to choose our own topics and how we present them.

The "TV hat " is what has re-energized my creativity. Learning a whole new way of writing and doing what I've done for 20 years was great. It helped me find my writing voice, not to mention being part of the best morning show in the country.

The "print hat" is the most challenging. I've told stories all of my professional life with audio and video so when I have to rely strictly on words, it's an entirely different kind of expression.

Rick: You've been at WGN for so long that people may not remember your distinguished DJ career (WCFL, WNUA, WFYR). Do you miss doing music radio at all? And what were some of the highlights of those days looking back at it now?

Dean: I don't miss music radio at all, especially in the state that it's in now. Toward the end of my WNUA days, I really had gotten pretty fed up with playing the same old songs, over and over and over. Couple that with the repetitive songs of Kenny G (photo) and Yanni, and you'll appreciate why I was at the end of my rope. It's got to be frustrating for jocks now since most stations are now so tight-listed with very little opportunity for talent to be talent. Most managers don't know how to motivate their talent to do great performances so the next best thing they do is to shut them up and shove liner cards in front of them. It's very sad and probably why alternative sources of music programming are making such inroads.

The best music station at which I worked was WFYR. Every show featured great talent. Don Kelly and Dave Martin were my program directors that really knew how to motivate talent to go for greatness everyday. The management was amazing. The news department (yes, at a music station) was second to none. Plus, being owned by RKO/General Tire, we got great discounts on steel-belted radials.

Dean: My early radio heroes were the WLS and WCFL top jocks of the day. Art Roberts, Ron Riley, Dick Biondi, Ron Britain and Barney Pip were my first radio awarenesses. I studied their every move. I had a pretend radio station in my basement where I'd do my version of their shows with a phonograph and tape recorder (dork again.) As I got older, it was all about Larry Lujack and Fred Winston (photo). Imagine how excited I was to get to work with Fred and become friends with him. I'd be embarrassed to listen to my earliest airchecks and hear how much of a bad rip-off of both I was. I can't believe someone didn't slap me!

Growing up here, my parents always had WGN on. Their classic talent lineup is still unmatched; Wally Phillips, Bob Collins, Roy Leonard, Eddie Schwartz. I probably developed my sense of broadcast responsibility from them. I also think that every radio person in Chicago over the past 25 years has been influenced by Steve Dahl. You have to admire how he pushed the envelope and opened up new horizons for all of us.

Rick: You regularly interview some of the biggest stars in the world. Who are some of your favorites and who have been some of the most difficult to deal with?

Dean: 95% of the celebs are pretty nice. (photo: Dean surprises Halle Berry with a tin of Garrett's Popcorn) They've got a job to do. They know I've got a job to do and we all co-exist perfectly. Through the years, I’ve gotten to know a lot of them so it's almost like visiting friends than interviewing movie stars. The best have been Tom Hanks, John Travolta, Diane Keaton, Bonnie Hunt (most of the Chicago people, in fact); they're down to earth, nice people. I could easily go on in my life without ever talking to Meg Ryan (condescending), Tommy Lee Jones (nasty), Debra Winger (confrontational) or the always-annoying Helen Hunt again.

Rick: Let's talk about the WGN-TV morning show. I think that's such a talented staff you've accumulated there. Who really runs that show, and who is responsible for creating the atmosphere of fun that comes through on the air?

Dean: It's the management that's smart enough to not mess around (too often) with something that’s working. It's a crew of incredibly talented people in front of and behind the cameras ; all working to make great TV everyday. Our morning show reminds me in a way of the TV show “M*A*S*H.” It's a bunch of constantly exhausted, irreverent, talented people, who know when to be serious and know when it's O.K. to goof around. There's an honesty to our show that seems to make it so refreshing. 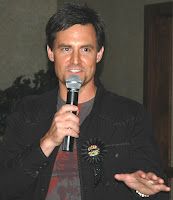 We all contribute. We all are heard but Larry, Robin and Paul set the tone around which everything else must flow. Our producers and writers are amazing. My producer, Tyra Martin, is a Godsend. Segment producer, Jeff Hoover (photo) is the class clown who comes up with some of the show’s funniest bits. I also love Ana, Pat and Val. It's really like a family, sometimes dysfunctional, all working toward the same goal. Plus, it's really unusual to have such great talent who happen to also be great people in real life. We're all friends and have each other's backs.

Rick: I know that Randy Salerno was a former colleague of yours. Talk about how the news of his death affected the WGN newsroom.

Dean: There was a tangible shockwave that came over the newsroom the morning when we learned of Randy’s tragic accident. He worked with many of us for 11 years. The entire tone of the show changed as we suddenly had to put our emotions aside and report on the top story of the day, which also happened to be something that affected us all personally. There were quite a few tears that morning. It was similar to the day at WGN Radio when Bob Collins died.

For me, Randy was one of the first people in the newsroom to encourage me in my transition from radio to TV. His desk was across from mine and when our schedules had us there at the sam e time, he'd be merciless when something sucked and tremendously supportive when something was great. His sarcasm and wit were always on, commenting on everything and everyone that came to his mind. His skill and professionalism was contagious. He was a great guy.

Rick: You hosted and co-produced a television show that I think will become a classic for people of my generation: "Bozo, Gar, & Ray ". How did that show come about, and what kind of a reaction have you gotten? 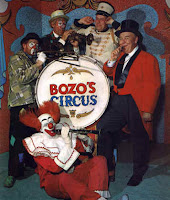 Dean: ”Bozo, Gar & Ray: WGN TV Classics” was the brainchild of George Pappas . Aside from his duties in the WGN-TV programming department, he is the station's unofficial historian. It was George who somehow found and literally screened hundreds of tapes to find the best clips to include in the show. George pitched the show to the station and they realized the value of it. He and I wrote the show. Jeff Hoover and our amazing editor, Terry Bates, added their considerable talents to the show, piecing together what, we're all proud to say, has become a very special program to a lot of people.

The results have surpassed anything we could have imagined. We knew there'd be a nostalgic reaction to seeing all of the old clips but we were especially overwhelmed by the emotional response we received from people all over the country who grew up with these shows. We’ve even heard from people that didn't grow up here, who’ve made the show’s annual airing a holiday tradition of their own. Last year was the third year it’s aired. The ratings and response remain strong. It was a true labor of love.

Rick: Now that you've done it all, I have to ask you--what's left? Where do you see your career going from here?

Dean: Hell, I'm the voice of Victory Auto Wreckers. What more is there for me?
Posted by Rick Kaempfer at 12:04 AM