Jay Marvin was a talk show host in Chicago on WJJD, WJEZ, and probably most famously, WLS. He is now hosting the morning show at KKZN in Denver-Boulder.


Rick: People in Chicago remember you well from your days at WLS. What was it like being the only liberal on such a conservative station? 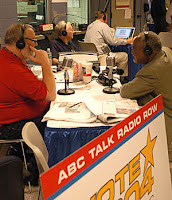 Jay: The great thing about WLS under both Drew Hayes and Mike Elder was it wasn't about being the only liberal on the station. It was about doing great radio (photo: Jay at a live broadcast). The whole "you got to be right-wing" move didn't come until after that under Michael Packer. And then it was boring and just sucked. All the fun was gone. A big thank you to Packer and Phil Boyce out of New York and WABC for destroying what Hayes and Elder had built. Now you have all these shows like Jerry Agar's and the rest. They're not even from Chicago. And it's all the same crap all the time. Chicago deserves better. The last time I was there I listened to WCKG. Best thing in talk on the air right now. Garry Meier sounds great. Roe is the only good thing on WLS besides Don and Roma. The rest is the same old same old.


Rick: You worked at a few stations (WJJD, WJEZ, and WLS) in Chicago and spent many years here. When you think of Chicago what are some of your fondest memories from your time here?

Jay: Oh, there are a lot of them. The time I did my show with Grant Parke from Tower Records in Lincoln Park and drew over a thousand people. The nights people like Tom Russell played live on the air, and of course the Saturday night unplanned/ planned movie viewings of Reservoir Dogs. I could go on and on.

Rick: After all these years as a talk show host, you've had countless politicians and newsmakers on your show. Are there any that really stand out in a positive or negative way?

Jay: Yes. Dick Durbin was great and very humble and honest. Barak Obama was very open and very cool. The current and former Governors of the state were both rude jerks. And of the non politicians, the late Eddy Bunker was great and so was John Riddley.

Rick: Aside from politics, one of the big topics on your show is mental health. As someone who has been diagnosed bipolar manic depressive, this is obviously a subject that is very important to you. When you first revealed your illness on the air, that must have been an emotional moment for you. Can you talk about your internal deliberation before you spoke publicly about it the first time?

Jay: I just blurted it out one day in anger when I was on in Tampa and never stopped talking about it. I often think back now to all the people I talked about it to off the air and the hospital visits I've made.

Rick: You are like the Renaissance Man. You're a painter, a poet, and an author in addition to being a talk show host. How often do you paint or write, and how important is that part of your life?

Jay: Unfortunately, I just don't seem to have time for any of it now. I get up at 2:30 every morning and by the time I'm done there isn't any more time left in the day.


Rick: You're now the morning man at KKZN in Denver-Boulder, doing a left-leaning talk show. You also fill in occasionally for Ed Schultz and you used to fill in for Jerry Springer when he was doing his show. What are your predictions for the future of progressive-talk radio? 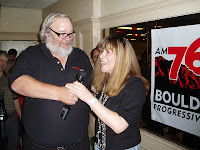 Jay: Progressive talk radio needs to stop being agenda driven radio and needs to be entertaining radio. (Photo: Jay Marvin & Randi Rhodes) I think these are bad times for talk. In the old days it used to be about having fun, being serious, talking about all kinds of things. Now it's all politics all the time and it's a drag. Most talk radio around the country sucks.

Rick: Is there anything you'd like to say to the listeners of Chicago that miss your show?

Jay: Yes. Thanks for all the great calls, the fun, and the e-mails I still get from time to time. I was very fortunate to work with some really great people.
Posted by Rick Kaempfer at 12:03 AM