I have more updates this week. A spotlight will shine on a brand new interview subject next week.

Richard Cantu was one of the first interview subjects at Chicago Radio Spotlight nearly four years ago. He had recently started working at ABC Network News in New York after a long and successful career in Chicago at WJMK and WBBM-AM. I checked back in with him recently because I know there have been some dramatic changes at the network, and wondered how those changes affected him...

Richard: They say the only constant in life is “change”—and that has certainly been my case in recent years here at ABC News Radio. When I arrived in late summer, 2004, I was assigned to anchor evening newscasts on one of three networks servicing ABC Radio affiliates. As everybody in this business knows, the economy has taken a terrible toll on radio stations, groups and networks. ABC is no exception and, consequently, there’s been a bit of change in Yours Truly’s career.

Where we once had three anchors working each 6-hour shift, we now have two—with one of the anchors covering newscasts on two networks. It was a bit nerve-wracking to start, but everybody seems to have settled-in to a workable routine. Due to some personnel cuts in October, 2009, I am now heard, at various times, on all three networks.

On Saturdays and Sundays, I’m on what we call the “I-Net”—it’s the premiere network ABC offers—and I can be heard on WLS hourly from 11am-4pm. Monday-Wednesday, I’m working the evening shift on the “E-Net” and “News Now” networks. Additionally, since the sportscasters were eliminated due to budgetary requirements, I am tasked to write and record two sportscasts that are distributed to affiliates across the country. That’s a lot of fun—especially since, when the opportunity arises, I can talk about Chicago sports instead of the usual East Coast-oriented issues you tend to hear in the national sports media.

Most recently, we’ve been committing a lot of time and effort providing content to Slacker Radio; an Internet venture that allows users to “select” the news content they want to hear(the ultimate in narrowcasting?). Time will tell if all this effort translates into paying customers. That said, I’m still having a blast working in radio; it’s a great job and I work with a lot of pros. I’m still missing Chicago—and if anyone needs a broke-down old newscaster, send ‘em my digits! LOL!

When I interviewed Rick O'Dell last year he had just been let go by WNUA. I caught up with him last week and asked him to tell me more about his new(ish) gig at WLFM... 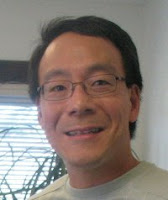 Rick: I've been at WLFM-LP, 87.7 Chicago's Smooth Jazz, since last December. I'm PD, MD and midday host. It's a unique environment, to say the least, and a major departure from the culture of Clear Channel. We're the only radio station among the media properties of the Venture Technologies group based in Los Angeles. I'm one of a staff of about a dozen people (mainly part-timers), led by GM Pat Kelley, rebuilding a format and building a radio station from scratch. Fortunately, we've gotten help in the programming department from some heritage WNUA talent: Bill Cochran, Loni Taylor and Scott Adams, along with Brian Culbertson and Dave Koz from the Broadcast Architecture Smooth Jazz Network.

We're up against some interesting challenges here (namely a weaker signal than we had at 95.5 and the proclivities of the Smooth Jazz format in the world of PPM), but the outlook is bright. June was our best ratings month, and July was our best revenue month so far. And our listeners' passion for the music we play has never been more apparent. It's all good.

When I last spoke to Alan Cox about two years ago, he had just been let go as the morning man at Q-101. He is back on the air again, although now he's in Cleveland. When I spoke to him the other day, I asked if he could get me caught up on what's happened since our last conversation. 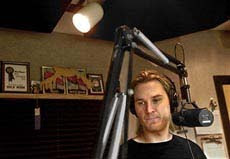 Alan: After we spoke in Sept of 2008, I took a sales job with WNUA, in order to keep my ear to the ground in Chicago, hoping that something on-air would surface. Ironically, I was only there for 11 weeks, as Clear Channel fired 1,200 employees on Inauguration Day 2009. As a newbie, I knew I'd be among the axed; sadly, stalwarts like Rick O'Dell (see above) found themselves in the same boat. As everyone knows, it was shortly thereafter that WNUA's jazz format was no more.

I continued to do stand-up in clubs around Chicago, as well as commercial voiceover work for clients like AutoZone, Verizon, and Northwestern University, narrating a few documentaries that aired on the Big Ten Network. In December of 2009, famine became feast when my agent called me with two on-air offers, neither of which was in Chicago.

As much as I hated being off the air, I hadn't contemplated having to leave Chicago again after only two years, and economic circumstances being what they were, I had to go where the action was. In truth, despite being bummed about loading the UHaul again, it's really been a great development. I'm hosting a talk show (which I had wanted to do all along) at the legendary WMMS in Cleveland, my third go-round as a Clear Channel employee. (One thing I'll say about CC: unlike other radio companies, getting booted from one position never keeps you out of contention for another with them.)

In some ways, WMMS feels like a throwback to my formative years working with Johnny B at The Loop. WMMS is a rock station that has had great success with talk in drive-time, a rare bit of foresight that a market like Chicago would do well to emulate. I've definitely brought a different vibe to the station, with my mix of comedy, politics, and raw, unvarnished commentary. (9 months in, my show is #1 18-34 and #4 25-54)

In April of this year, I was also brought on to host middays at WSDD in St. Louis. It's a more music-intensive show, targeted at Gen-X women, but the management there were fans of my irreverence and the OM is an old friend of mine, so it all came together. I record the St. Louis show in the morning from my Cleveland studio, then go live on WMMS from 3-7p.

Fortunes in this biz turn on a dime, and I'm very happy to be back on the air. Now my goal is to get back to Chicago in a few years and inject some much-needed new blood into the talk radio landscape in my hometown. Also, a final shout-out to Jonathon Brandmeier and Robert Murphy. Both have been invaluable mentors to me, and both deserve to be back on the air at home, ASAP. In the meantime, until I return, anyone can hit me up and stream my show at www.alancoxshow.com.
Posted by Rick Kaempfer at 7:30 AM