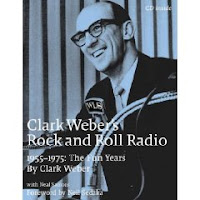 Last year I interviewed Clark Weber about his remarkable career. This interview is strictly about his brand new book: "Clark Weber's Rock and Roll Radio, 1955-75, The Fun Years"


Rick: I noticed that the Foreword to your book was written by Neil Sedaka. How did that come to be?

Clark: I knew Neil from back in the 60s, and I decided to call and ask if he would do it, and he said hell yes. He and I were good buddies, and he would call on my office at WLS from time to time when I was the program director at WLS. The record company had their own promo people but if he was in town, he would come in personally. One time he was in my office and I got a phone call about a band canceling at a church event in Evanston that I was supposed to be hosting. Well I went there that night, and I was ready to go on stage, and the people from the church said, 'You're not going to believe who is backstage to perform.' It was Neil, and he entertained the crowd for a half-hour. The ironic thing is the story is coming full circle. I'm going to be introducing him on stage in St. Charles in September for his show there, and he doesn't know I'm coming yet.

Rick: Your co-writer is Neil Samors. Tell me about him.

Clark: Neil is the owner of a publisher called 'Chicago Books Press' and they write books about Chicago and Chicago history and things of that nature. He did a book called "Chicago in the 60s" and he interviewed me for that book, and while we were talking that day he said 'you've got so much to say, and you should write your own book.' Well, I laughed and said no. I had tried to write my memoirs at least three times; with two different sons-in-law, who were both writers, and once with my news director at WJJD. All three times it didn't work, and it didn't feel right. This time Neil said 'you narrate a chapter and I'll write it.' We did that for a few chapters, and then Neil said "You can write this Clark." And I did. I wrote it-- with his expert help—he has a PhD in English.

Clark: Those were the fun years for rock radio because by 1975, FM radio had taken so much of the audience, it had already turned into 'three songs in a row' followed by eight commercials, followed by three in a row, etc. The DJ had become completely superfluous, and I think rock radio has never really recovered from that.

Rick: To me, as a long time radio guy, I'm even more fascinated with the rock and roll part of this story. You told me some incredible stories the last time I interviewed you, including a story I've retold a million times to friends and relatives about George Harrison. Can you tease a few of the other rock and roll stories?

Clark: That George Harrison story in the book, complete with pictures. There's also a story about the Monkees. I threw them out of the radio station one day, and you'll discover why I did that, and why they came back the next day to apologize. There's another story about a famous female singer that wasn't famous at the time, and in order to get an audience to see her, Mr. Kelly's had to give away free drink tickets. You won't believe it when you see who it is. Another story is about a record promoter who gave me a record of a young unknown artist. I played the record a few times and I could just tell it was going to be a hit—-so I said—"I'm going to play this one." I asked the promoter if the singer had accompanied him to the station, and he told me the kid who sang it was so nervous about being rejected that he was waiting outside on the street corner. When you hear who it was, you won't believe it. There are lots of stories like that, from the very beginning of rock and roll, when it was known as dirty crotch music—-especially stories about the difficulties it had breaking into the mainstream.

Rick: Did you talk to any of the other rock radio jocks from that era when you were writing this book, and if so, who?

Clark: Ron Riley—of course. He lives in a radio announcers home for the lame—I'm joking of course. I saw him the other night, and we had a great time. He has a comment on the back cover of my book, and of course felt it was necessary to say something bad about Weber. He originally said "I heard the only way Weber finished this book was by being connected to a Sears Die-Hard," but we couldn't use it because that's a trademarked product, so he wrote something else. I also talked to Don Phillips, the all night man, and Bernie Allen, and Bob Hale. Oh, and Larry Lujack of course. There's a whole chapter about how I scared the crap out of him.

Rick: Did you learn anything about that era that you didn't know before you wrote the book?

Clark: Not about radio, really, because I had been so personally immersed in that world. I did learn some things about the artists though...so much great stuff, and a lot of it I just couldn't fit into the book. We had decided to keep it at 200 pages, and that really proved to be a challenge because we had so much material. Maybe we'll do another book (laughs). Not going to happen! In all seriousness, this book has the best stuff—-200 pages, 75 of my personal photographs, and a CD insert. It's selling very well already; which is something that makes me very proud.

Rick: Looking back on that era now, who would you say were the most important and lasting figures in Chicago rock radio and why?

Clark: Larry Lujack, of course. You can't really talk about that era without talking about Lujack. And Dick Bi-oldie. That's what I call him that—it's a joke. I mean Dick Biondi, of course. The feud between Ron Riley and myself—-that feud worked perfectly. Really, all of the jocks contributed to that era; some more, others less, but they all contributed, as did the program directors of that era.

Rick: What lessons are there to be learned by today's rock radio?

Clark: I was listening to a rock station a little while ago and I was so disappointed...it was time and temp and a little giggling. I felt so excluded by what was going on. They aren't doing a very good job of involving the listeners—making them feel like they are a part of the experience. Rock radio today has its work cut out for it. They have to do something to make it more interesting—like newspapers, they have to completely reinvent themselves. They need some personality.

Rick: Why do you think the personalities aren't there anymore?

Clark: The farm clubs are gone and jocks don't have stations in smaller markets where they can learn their craft.

Rick: Thanks, Clark. Where can people get the book?

Clark: It's available at Borders, Barnes & Noble, and independent book stores around the city, and you can also get it online.

Rick: And if people want to meet you—are you doing any book signings?